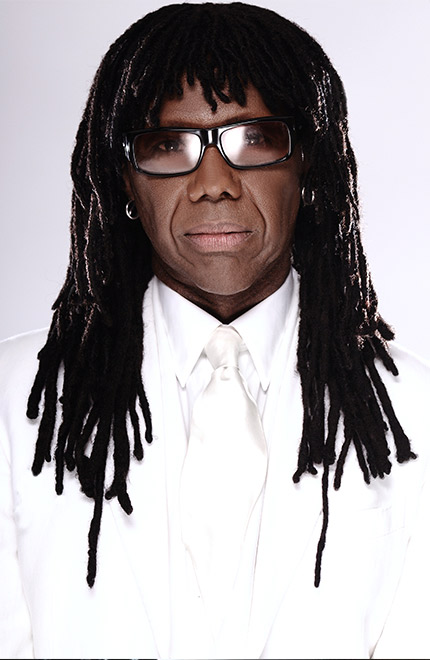 A tireless creator of hits, Nile Rodgers has written, performed and produced for some of the world's biggest names, including Madonna, Daft Punk and David Bowie. Yes, the former leader of Chic is now a great master.

His favorite guitar is a 1959 Fender. With it, Nile Rodgers gave good time to the contemporary world. He made the planet dance, wrote the most beautiful stories, and brought sunshine to our hearts to give us our vital dose of vitamins. Thus he became, through time and hits, a master of his time, crossing his work with the talent of high-ranking performers. Everyone wants to work with Nile Rodgers, so much so that the former leader of Chic, a disco, funk and soul lover has genius pegged to his body.

Thus, David Bowie fell under the spell. That gave Let's Dance. Madonna gave him the keys to the studio. That gave birth to Like A Virgin. Daft Punk gave him the sweet eyes. Get Lucky was born. It's obvious: with his sunglasses, Nile Rodgers transforms everything he touches into a jewel of sound. For the virtuoso from Greenwich Village, raised to the rhythm of the Beat Generation, always finds the thing that makes the difference, so much so that he has single-handedly succeeded in wonderfully reviving the careers of Sheila, Nougaro and Duran Duran.

Under the gentle weight of his light strings, ideas are flowing at lightning speed. His recipe: a delicate blend of joie de vivre, the eternal desire to tread the stage and the ecstasy of the most audacious sounds. Here reigns the finesse of spirit. The riffs are subtle, always dosed with the precision of a goldsmith. That's the way Nile Rodgers is. He likes it when it sounds perfect, because music is his fuel.

"In the mid-1970s, my girlfriend took me to see her favorite band, Roxy Music. I was flabbergasted. They were elegant as hell. I thought to myself, my God, if we adapt this idea to black music, it's going to be powerful! ». Well done! During this interview at Vogue, Nile Rodgers summed up perfectly the beginning of Chic, a group founded with his friend Bernard Edwards. Three words characterize the adventure: elegance, joy and musical freshness.

It is a planetary cardboard. With the hit Le Freak, Chic became a seventies icon and set dancefloors around the world on fire, also becoming the best-selling single in the history of Atlantic Records. A few months later, Good Times punctuated the incredible climb to the top, giving a smile to everyone in the middle of the second oil shock. So, to describe such a success, which term is stronger than phenomenal? Because this time, it seems to lack words powerful enough in the dictionary to tell the collective euphoria that is born around Chic.

In parallel with Chic, whose adventure will end three years later, Nile Rodgers produces, for the first time, a renowned artist. Diana Ross effectively calls upon him, as well as her friend Bernard Edwards, to give birth to the album Diana. The singles Upside Down, I'm Coming Out and My Old Piano were a huge success. Then, a few months later, Nile Rodgers allowed Sheila to release the excellent hit Spacer.

His meeting with David Bowie

This is a special moment in his career: his meeting and collaboration with the illustrious David Bowie. Nile Rodgers loves to talk about it: "At the time, he absolutely wanted to make a hit and he asked me. I left Chic to work with him. He played me a pretty dark ballad. I gave it a jazz color and I accelerated it, so that it was more danceable". Result: as usual, a huge success. He worked for a few months for Madonna, INXS, Jeff Beck and Mick Jagger, among others.

At the side of Daft Punk

He has worked with the greatest, from Mickael Jackson to Nougaro. So when Daft Punk call on him, nobody is really surprised, so much Nile Rodgers has become the king of the hits. And it's still a winning bet, since the hit Get Lucky is a breath of fresh air that gives the world a smile. Always in the vanguard, he will continue on his way and will write for Sam Smith, Avicii and even Lady Gaga, among others. A golden opportunity for the American artist to be known and loved by the younger generation!

It would take whole pages to explain the importance of this artist, who gave disco its letters of nobility and turned pop music upside down. It's an immense joy to finally see him a few streetcar stations away from my home. Tonight, he was once again immense. What luck we had!

Samuel, after a concert in Marseille

Nile Rodgers is a living legend. The number of tubes he has shaped is just unbelievable. He has put into orbit some exceptional pieces that have marked entire generations and have allowed greats of music to accelerate or relaunch their careers. What a great artist! So I might as well tell you that seeing him on stage is almost a must to understand contemporary music.

Resistance, energy, motivation, genius: we are always delighted to see Nile Rodgers again. His guitar always pierces the sound, more modern, more diluted perhaps than before. The man who wrote, played or produced for David Bowie, the B52s, Paul Simon or Daft Punk, is now alone at the helm with a Chic leg that is always recognizable among a thousand.

Between funk and disco, Nile Rodgers and the group Chic have plunged Carhaix back into the golden seventies, brought out the hits of Madonna, Daft Punk or David Bowie and perfectly warmed up the Breton dancefloor of the Vieilles Charrues.