The mirror of another America !
Ecouter 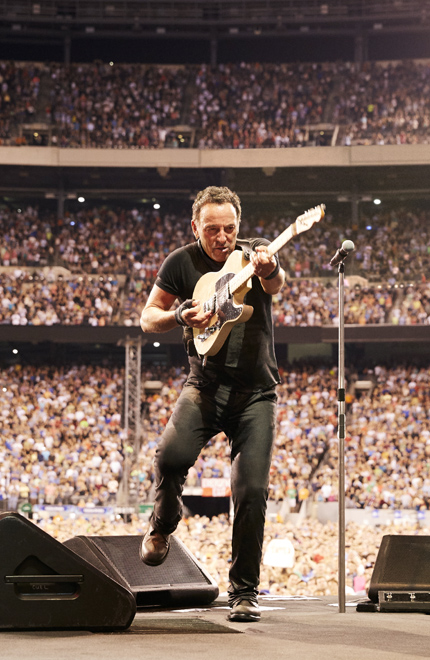 With strength, elegance and sincerity, Bruce Springsteen tells the story of a beautiful but fragmented America, torn between hope and shattered dreams. Thus, free as air, the Boss of New Jersey wanders through the land of the blue collar workers, to tell a side of his country too often ignored.

Behind his guitar, a natural extension of his body, Bruce Springsteen shapes timeless melodies, markers of America from below, where the working classes and minorities fight body and soul to live. Nothing stops this poet who never hesitates to speak out against oppression: neither the weight of time, nor the gusts of fashion, nor adversity. On the constant run against injustice, and constantly jostled by his existential questions, Freehold's king uses his rough voice to the limit. His obsession: to narrate the daily life of the forgotten, from the humble worker in New Jersey to the migrant from elsewhere.

In his own way, with vitality and audacity, Bruce Springsteen plunges us into the heart of a country with a thousand ambiguities, through timeless sounds. For there, between the steaming sand of New Mexico and the beauty of Pennsylvania, the eternal sun of country and folk music hits hard on a rock with contrasting colours. And this gives the hymn to tolerance of Streets of Philadelphia, delicately coupled with an electrifying Born in the U.S.A, a powerful tribute to the veterans of Vietnam. Emblematic titles that he never tires of playing with energy and accompanied by his E Street Band, during concerts that often hang on for three hours.

Because it's obvious: Bruce Springsteen, unconditional lover of Elvis Presley and Bob Dylan, whose link he embodies marvellously, was born to recount, between primal shouting and melancholic lament, the setbacks of his time. More than an artist, more than a legend, The Boss becomes, album after album, the unfiltered mirror of an entire society. So let's say it loud and clear: this self-taught artist with 35 albums is the most beautiful incarnation of silent America!

Producer and music critic John Hammond stumbled upon the irresistible charisma of Bruce Springsteen. The man who, a decade earlier, had given Bob Dylan the keys to coming out of the shadows, this time allows the New Jersey man to sign on the Columbia label.

The release of Born to Run, a critically acclaimed album, has helped Bruce Springsteen make a name for himself on the international scene. It is the consecration: the artist makes the covers of Time and Newsweek. His career is definitively launched.

The spark of Patti Smith

Renowned American producer Jimmy Lovine sees real potential in the track Because the Night, written by Bruce Springsteen, but not included on the album Darkness on the Edge of Town. Together, they asked Patti Smith to perform it: it was an immediate success and allowed the Chicago goddess to assert herself for good on the international scene.

In Berlin, shaking the wall

A few months before the fall of the Berlin Wall, Bruce Springsteen performed in the east of the city, in the heart of the communist part. More than 30,000 young Germans are present. The messages sung by The Boss helped to generate a broad movement that would lead to the fall of the wall the following year.

Bruce Springsteen found himself the target of threats following the release of the song American Skin, in which he strongly denounced the murder of a young black man by the New York police on February 4, 1999. Faced with the controversy, The Boss refused to give up, refusing body and soul to cancel the slightest concert of his tour.

The autobiography of a legend

In 2013, the artist still filled the Stade de France and played in front of 65,000 people. But 40 years after his first appearances, Bruce Springsteen decided to offer another gift to his fans and put words to his career, his convictions and his emotions. He then published Born to Run, his autobiography, in which he talks about his long struggle against depression for the first time, without a filter. This book was followed by a series of Broadway concerts, a dazzling success in which his life story is interspersed with fifteen of his songs.

Bruce Springsteen is still at the top, with a magnificent performance of almost 4 hours. It's a real treat for the ears. It is by far the best concert I have seen lately. It will remain a great and beautiful memory.

Gaël, after the concert at the Accor Arena in Paris

What a legend! Bruce Springsteen has travelled through the ages to tell the story of his America, with elegance and conviction. It is a pride to collaborate with this rock and folk hero, who has spent his entire career defending courageous positions without ever batting an eyelid. He is an example to follow!

It was at the end of the third hour of the concert, when the "Boss" and his nine acolytes from the E Street Band launched into the song "Ramrod", that electricity came to life on stage, mute guitars, basses and keyboards and neutralise the play of lights. Not enough to disturb these old rock'n'roll veterans: while technicians are busy backstage, Springsteen signs autographs and then goes for a short tour of the hall.  When the sound comes back, Springsteen starts the machine again, prolonging the pleasure for another hour or so, without big screens and in the basic raw light, but with tenfold energy.

The Boss, with his dented voice, has no equal for singing this eternal but fantasized America, the America of the great spaces that he captures in sepia on this new album, the first in five years. For a long time the kid from New Jersey dreamt of California, even settling there for a while. With this album recorded at home on the East Coast, he brilliantly renews a thread stretched by time and legend.

2016
1 concert
2013
1 concert
2012
2 concerts
2009
1 concert
2008
1 concert
2007
1 concert
2006
1 concert
2005
1 concert
2003
1 concert
See more
Book now
Remonter
gérard drouot productions uses cookies on this website. With your approval, we will use them to mesure and analyse your visit on the website (statistic cookies) to adapt it to your interests (customized cookies) and to provide you with relevant information (third party cookies). Customize
Loading