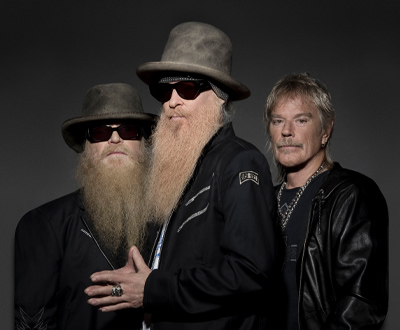 It's loud and it blows your mind: the Texas gang's bluesy rock has been making waves for ages. Irresistible refrains and powerful rhythms: what more do you need to love these guys? Because it's systematic: ZZ Top's crazy bearded guys give you a kick with every riff.

Only the color of their thin beards, bleached by time, seems to have changed. The band, formed in 1969 after Billy Gibbons received a Fender Stratocaster guitar from Jimi Hendrix himself, retains its youthful ardor. Hello Houston, we have a problem: ZZ Top doesn't care about the weight of years. They still have the hearts of kids, the legs of fire and the hits that can ignite the rooms with a simple snap of a lighter. Besides, the Texas gang still likes nice cars, leather jackets and big hats.

Because if these three veterans still unleash the crowds, it is especially because they found an unstoppable formula to release a crazy energy which makes you want to rush in a Chevrolet through the deserts of America. Heirs of B.B. King, Elvis Presley and Jimmy Reed, it must be said that they have it under the hood. It pulses at a thousand miles an hour, so much so that the sober and virile efficiency of ZZ Top is irresistible. No smoke or particles come out of the exhaust: only the big sound propelled with force by Billy Gibbons' legendary voice, the endless guitar flights, Dusty Hill's thundering bass and Frank Beard's heady drums.

Same line-up, same power. The three inseparable, friends until the night of the times, are beasts of scene by nature. They have it in their blood. In fact, they love to play live, because if they are on earth, it is only to make us take off two feet above the ground, to put a smile on our face and to give us back our childish soul. Everything else doesn't matter!