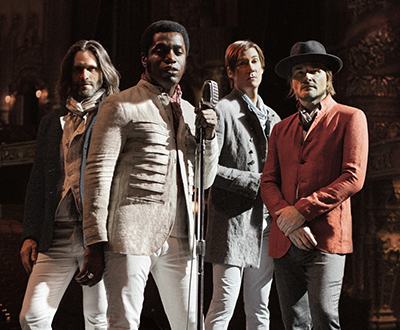 Vintage Trouble is an explosive cocktail, a mix of overpowering ingredients that, when mixed together, definitely have the taste of anthology artists. You can feel the Rolling Stones, Chuck Berry or The Animals in the notes of the guitars. One could feel like in the 60's when one sees the charismatic leader of the band, Ty Taylor, wearing a three piece suit like a retro dandy. And yet, the band has been touring the world for only ten years.

The soul is definitely soulful, the packaging dives into a more urban terrain and lets itself be carried away by a joyful rock, sometimes with a hint of country. If one recognizes at first glance the retro influences, Vintage Trouble gives them a hell of a freshness. It swings, it's rhythmic and we can't resist to move in rhythm to accompany the crazy energy that the band delivers on stage.

Because led by its singer, the group electrifies its concerts. And several critics have noted that there may be something of the immense James Brown in Ty Taylor. Frenetic gesticulations, mic playing, slamming over the crowd, the fiery leader never stops, moving everything in his path, setting his audience on fire and reminding them of the great hours of Mister Dynamite himself.

It must be said that this hard worker has made joie de vivre his motto. Opening for the greatest rockers, in front of stadiums of 60,000 people, or in more intimate venues in front of his own audience, he gives the same energy and gets high on stage. For him, the important thing is "to embrace each moment with a ferocious appetite", music being "the best way to transmit this love of life"!

The band was formed in 2010 by a bunch of buddies, Ty Taylor on vocals, Nalle Colt on guitar, Rick Barrio Dill on bass, and Richard Danielson on drums. They quickly released their first album, The Bomb Shelter Sessions (2011), whose sound is delightfully reminiscent of the vinyl and juke joint era. But it's two years later that the band will really start to make a name for themselves. With the help of the legendary manager Doc McGhee, they go to warm up halls and stadiums for the biggest names in rock: AC/DC, the Rolling Stones or the Who. And the public is completely conquered by the crazy energy of these happy troublemakers.

They are not really the kind of band you expect at Hellfest, but after all, they too are a heavy hitter. After an hour of a concert that took a good part of the festival-goers in its whirlwind, who recognize in the sounds they hear the roots of hard rock or metal, Ty Taylor is on the verge of tears. In a message he said: "I had some preconceived notions about this festival, its atmosphere and how we would be received. Well, I'll tell you, I was wrong, I saw only love, support, laughter.

After three albums recorded in conditions close to live to retranscribe the energy they deliver on stage, Vintage Trouble released two EPs entitled soberly Chapter II - EP I and Chapter II- EP II. This time, they raise the level, trying more funky experiments in studio. Ty Taylor's voice, brought to the top by his musicians, is once again a fragile bridge between the old and the new. It's delicate, it's exquisite, but above all, it's danceable as ever.

2021
1 concert
2019
3 concerts
2018
4 concerts
2017
5 concerts
2016
6 concerts
2015
2 concerts
2013
1 concert
2011
1 concert
See more
Book now
Remonter
gérard drouot productions uses cookies on this website. With your approval, we will use them to mesure and analyse your visit on the website (statistic cookies) to adapt it to your interests (customized cookies) and to provide you with relevant information (third party cookies). Customize
Loading