The attitude of a great master
Ecouter 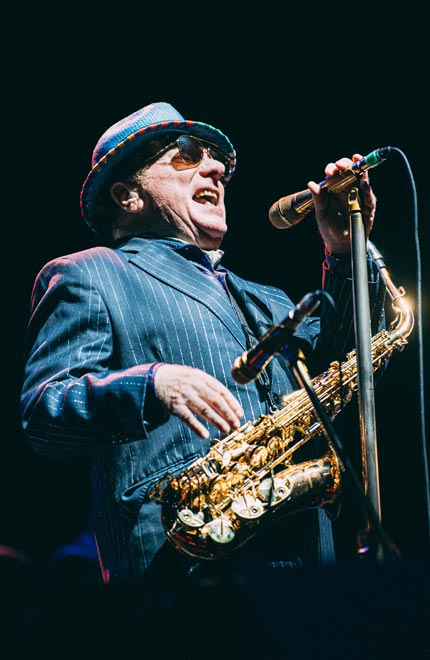 Black hat, black suit. Van Morrison, a man with a career without equal or down time, is a character apart. With his nonchalant attitude, this Irish bugger has spent his life blowing a warm air of blues, jazz and rock. He likes to wander around, as if to taunt us.

Van Morrison has always tried to avoid excessive glorification. He prefers posterity to posters, studios to interviews, and masterpieces to a frenzied crowd. In a way, he is a strange form of anti-Mick Jagger, so much so that the man wants to be in the shadow of his timeless melodies, his golden saxophone and his roaring voice. Originally from Belfast, a cold and torn city where armed conflict has long been a bloody routine, the northern cowboy has never wavered. Still standing, still alive: he fills his discography brick by brick to build a kingdom where influences cross over to make labels flinch.

It's a fact: the former leader of the Them only sees the world through music. He has thus forged a career that commands admiration, without breaks or destructive excesses. Yes, Van Morrison is a monument that sneaks onto the asphalt roads paved by Ray Charles, Chuck Berry and the country gods. So on stage, grumpy and shy on the edges, he delicately scratches our hearts with his natural grace.

Not very talkative, but highly talented, Van Morrison is thus a quirk of this world, which has marked the decades with emblematic titles that never needed to become hits to mark their era. Timeless is his music, sensational is the man. Because this media allergy sufferer, whose stack of records reaches his chest, is a mule head, he will always insist on magnifying to perfection an immortal form of sobriety.

Them, the stealthy escape

This April day, Them performs for the first time. In the midst of his covers of Chuck Berry and Muddy Waters is a song that will make people talk about him: Gloria. It's now a rock classic, but it took a few months before the single took off on British and American radio. Later, artists like Jimi Hendrix, Frank Zappa and Noir-Désir will cover this beautiful song.

The big van is getting bigger

On returning from a successful tour of the United States, with Jim Morrison opening for Them, Them dissolved under the impetus of the elusive Van Morrison. He retired after a laborious, even chaotic concert in Belfast. But this fiasco didn't stop the Irish singer from bouncing back. Two years later, he will give a huge slap in the face to all rock lovers.

Van Morrison is known for his incredible feats of brilliance. That's what he manages to do with Astral Weeks, considered by some to be the best rock record of the last century. He then takes us to a parallel world where his talent illuminates us. Although it didn't sell much, the album has since been ranked 19th in the Rolling Stone magazine's ranking of the 500 greatest albums of all time.

The Divine Air of Northern Ireland

His country is so musically rich that Van Morrison cannot ignore it. That year he affirmed his love for the sounds of Celtic soul with an incredible live performance recorded at the Belfast Grand Opera. He then demonstrates with virtuosity that he is capable of taming all styles, with charisma and originality.

The hymn of silence

Silent he is in the media. But on stage as well as in the studio, he roars his voice to compose a strange hymn to silence. New record. New jewel. With the album Hymns to the Silence, the Northern Irish artist amazes his world and dazzles the critics. Among the tracks recorded is I Can't Stop Loving You, a sublime cover of Don Gibson, in collaboration with The Chieftains.

The prophet is still running

It's a good old Van that moves free as air. In a few months, he presents three pancakes : You're Driving Me Crazy, in collaboration with Joey DeFrancesco, The Prophet Speaks, a record of covers, and the excellent Three Chords & the Truth. Not short of creativity, Van Morrison is not short of breath either. In 2020, when the coronavirus crisis forbids gatherings of more than 1,000 people, he agrees to give two concerts in the same evening at the Olympia. Because one thing is certain: he still has tons of stories to tell us.

Van Morrison is a character apart, and he has just proved it again on stage. A bit cold as usual, and that's what we like about him, he has shown that age only strengthens his talent. He has the sacred fire in him and an extraordinary voice. What a beautiful moment!

Daniel, after a concert at the Olympia (Paris)

Van Morrison is quite a personality, but above all he is a great artist and a stage performer. He almost intimidates us with his charisma, so immense and timeless is he. How lucky we are to still see him playing in France today, with his blues-rock with a touch of jazz and soul. He is capable of touching everything, but never gets lost. It's impressive!

From one instrument to another he has retained a phenomenal capacity to modulate his breath with belching and caresses, shouts and whispers, groans and incantations. This voice always seems to be in struggle or in search, and its holder, the enemy of self-contentment, has never been afraid of being seen as an eternal grumpy.

The Northern Irish likes to muddy the tracks from night to night and never delivers the same concert. He fixes his lectern on certain songs, to give better voice, the whole thing is done with disconcerting ease. The seven musicians are free of any pressure and clearly enjoy themselves, as if this evening took them out of their comfort zone.