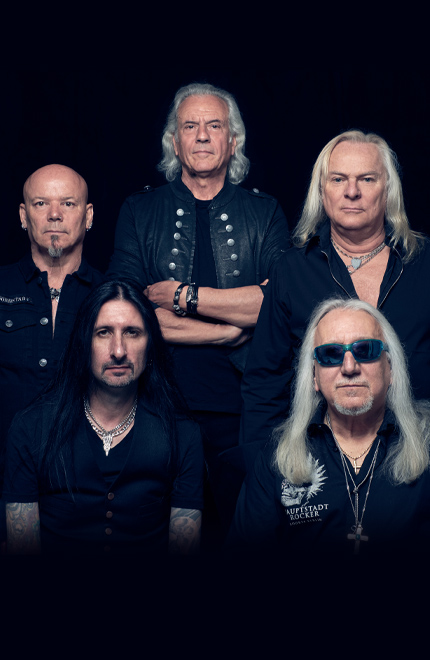 For over fifty years, Uriah Heep have been one of the most influential English rock bands of the early 1970s, alongside Black Sabbath, Deep Purple, Yes and Led Zeppelin. They established a sound all their own, with massive keyboard sounds, powerful vocal harmonies and superb guitar riffs.

Under the leadership of Mick Box, Uriah Heep was founded in 1969 as a reference to a character in Charles Dickens' novel David Copperfield (1849). Their first album, 'Very 'Eavy, Very 'Umble', was released in 1970, and was notable for the song 'Gypsy', which became a classic in their repertoire. Despite the reticence of the press, the band played to ever larger crowds. A progressive side emerged on the second album 'Salisbury' (1971), where the title track was almost 16 minutes long! During the 1970s, the band gave flamboyant performances in which Mick Box's guitar and David Byron's unique voice were perfectly combined.

Throughout its career, the band underwent many line-up changes, with Mick Box remaining the only permanent leader. However, with the arrival of Bernie Shaw on vocals and Phil Lanzon on keyboards in 1986, the band finally found a long period of stability.

With a total of 25 studio albums and a myriad of live performances and compilations, Uriah Heep has sold over 40 million records worldwide. Particularly well known in Germany, Scandinavia and Eastern Europe, they were the first Western European band to perform in Russia in December 1987, where they played to over 180,000 people in Moscow. Their repertoire is a collection of hits written over the decades, from the 1970s to the present day, including classics such as "Gypsy", "Easy Livin", "July Morning" and "Lady in Black". The latter has been Top 1 in Germany on three occasions.

Uriah Heep continue to tour around the globe, bringing with them a collection of stunning hits and virtuoso performances, exciting old and new fans alike. We look forward to seeing them in France soon!