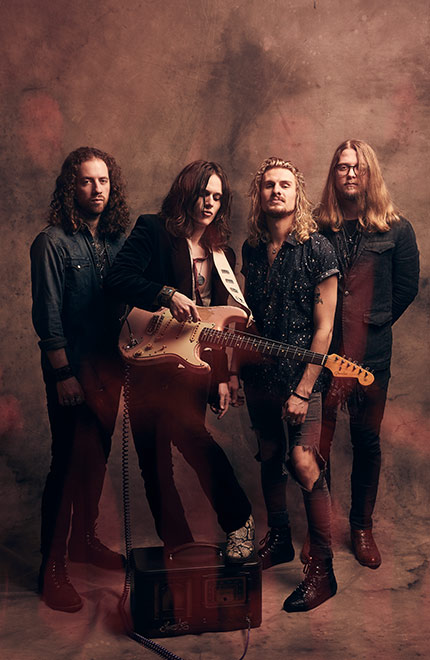 Tyler Bryant, a young prodigy whom guitarist Vince Gill said would be a "future guitar god", has surrounded himself with a band of headbangers worthy of the rock of the seventies from which they draw their inspiration. With all the audacity of youth, they set off in a huge cloud of riffs on the tracks of a heavy blues-rock.

Energetic to the brim, the four friends tirelessly criss-cross the roads of their America and Europe. Untiring, on the way, they regularly write and release EPs and demos on the Tube. But when they're in the studio, they can't wait to get back on the tour bus and play live versions of their short, sharp tracks.

On stage, it's rockstar Tyler Bryant. A voice that hovers over every note and guitar hero poses, the one who says that "just because I can play guitar doesn't mean I have to do it every time for three minutes" on his albums completely unleashes the horses on stage. The solos are chained together, the strings tormented to the treble for long minutes, the riffs heavy and boosted, the oxen incessant. A demonstration of virtuosity that the audience, transcended, never tires of.

And the group has resourcefulness and a positive attitude. Music is their outlet and when their tours are brutally interrupted by the global pandemic and their bass player decides to go elsewhere, he doesn't let himself go to the dark side of rock. No, they simply decide it's time to move on, to show what they've got in their stomachs once again. And in twenty days they record a new album. The singing is more composed, the compositions more worked out. At not even 30 years old, would the young mad dog that is Tyler Bryant reach a first form of maturity?

Together with drummer Caleb Crosby, they founded Tyler Bryant & The Shakedown in 2008 and released a few EPs. But it's from 2011 that the band will really get noticed. During a radio interview in New York, the young Tyler met another guitarist: Graham Whitford, the son of a certain Brad Whitford, legend of the band Aerosmith. Between the two, it's love at first sight and Tyler immediately gets him on board. The following year, the band gave birth to their first album, Wild Child, a title in the form of a claim that received a perfect score of 10/10 from Blues Rock magazine.

The road is their landscape and the tour bus is their main residence. To carry their voice from one end of the world to the other, Tyler Bryant and his companions go on tour after tour with headliners to overthrow the dead. AC/DC, Guns n' Roses and, of course, Aerosmith, the band forges a name for itself by the strength of its wrists, dezzed strings and smashed sticks.

Show must go on… Online !

Their fourth album, Pressure, is a pure product of the confinement that hit the world in early 2020. The music is more worked out and sometimes touches the roots of the blues when the band finally allows itself to play in a more emotional register. And sanitary conditions oblige, this new generation band has decided to propel their album with great pomp and ceremony and live on YouTube. A resounding success since the magazine Guitar Part elected the young Tyler Bryant "Best guitarist of the year 2020"! But it's certain that the band has ants in their legs and can't wait to hit the road again.

The guys from The Shakedown are clearly in the mood for a fight tonight. Even if Tyler Bryant is the undisputed leader, you can feel the symbiosis between the musicians and it's nice to see. They threw us an hour and a half of heavy rock, largely influenced by the seventies without ever falling into the copy. A hell of an evening and a band that I hope to see again very soon!

Maeva after a concert at the Nouveau Casino de Paris

The members of Tyler Bryant & The Shakedown take up with strength and energy the ingredients that have made blues-rock a success. And if you can feel a bit of Black Crowes in them, they trace their own path with dizzying riffs and heavy bass lines. Friends headbangers, it's time to let your hair down!

Who knows how long it will last... Anyway, for now, Tyler Bryant is all in. He's the kind of guy who never stops, even when it comes to investigating demos and song ideas between dates around the world with his Shakedown buddies, who are not, um, complaining about it at the moment, but rather inclined to put their hands in the thick of things when it comes to getting things in shape.