Always at the TOP
Ecouter 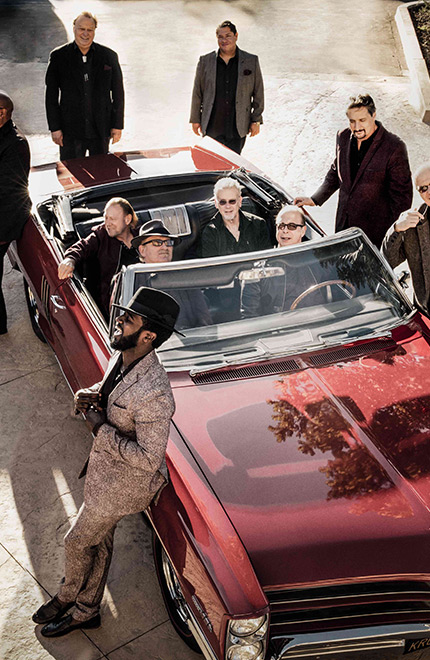 It is the story of young prodigies who carried music as a banner and soul in their hearts. Emilio Castillo, already a talented saxophonist, was just 18 years old when he formed a band with his good friend Stephen 'Doc' Kupka. They were soon joined by others, including the string-breaker Francis "Rocco" Prestia on bass.

The millimetre adventure, between vibrant soul and dancing funk, has been going on for more than fifty years. It must be said that the formation of a dozen musicians, depending on the era, knows how to set the stage on fire. The brass section is resounding and is rapidly forging a reputation that extends beyond its borders. Santana, Elton John, Ray Charles, Eddy Mitchell or the rockers of Aerosmith, all recognized the ingenuity of these masters of the winds, collaborating with them for the time of an album or a title. As for Prestia, who will have accompanied the band during almost all its epic, her powerful slap could make the dead vibrate when her dead notes simply make the funk lethal. An intense and energetic mix that wakes up crowds and shakes up souls.

Since its creation, the band has been reinventing itself by integrating some of the most gifted artists of their generation. This was the case with singer Lenny Williams who brought the band its moment of glory in the seventies. And it's still thanks to Memphis' colossal performer Marcus Scott who walks in the footsteps of a James Brown or an Aretha Franklin. With their latest album, Step Up, the band shows once again that they are capable of innovation, this time producing an urban Soul Music that doesn't stray from the strong emotions of their roots.

When Emilio Castillo founds his band and starts recruiting talent near Oakland, he names his band The Motowns and promises himself one thing: he will soon be playing at the Fillmore Auditorium in San Francisco. But with a name like that, it's hard to achieve that goal. The band then chose Tower of Power, whose acronym is TOP! A name that finally remained for the next fifty years.

Tower Of Power is on top!

In 1970, singer Lenny Williams enters the dance and it is the beginning of stratospheric successes for the group. In 1973, their eponymous album contains three little bombshells: So Very Hard to Go, which will rank in the top 10 of many West Coast radio stations, This Time It's Real and What is Hip? which to this day remains probably Tower of Power's best known single. In 1974, the band took a more funky turn with Urban Renewal which confirmed their immense success. At the peak of their career Lenny Williams leaves the band which will remain very popular but will then be less broadcast on the airwaves.

The list of Tower of Power's collaborations is much longer than the arms of all its members combined. But in the 90s, it was Sir Elton John himself who invited them to take part in his Duets album. And six years later, it was with one of the most American Frenchie that they collaborated on the album Les Nouvelles Aventures d'Eddy Mitchell.

Soul and funk, against all odds

In 2017, a hard blow for the Oakland gang. Two of its members, long-time drummer David Garibaldi and bassist Marc Van Wageningen are hit by a train. They miraculously survived the accident and it took them many months to recover. But that doesn't stop Tower of Power from releasing its 50th anniversary Soul Side of the Town (2018) and then the very good Step Up (2020) in which the talented young singer Marcus Scott takes part.

If you want to be shaken, I recommend Tower of Power. The play between bass and drums is overwhelming, the brass section is at its best and the singer has a superb voice that goes well with soul, funk or blues. These guys are real beasts of the stage and we can only applaud their monstrous work!

Elena after a concert at La Cigale

Soul and funk have produced some of the most virtuosic bands in existence and Tower of Power is one of them. On stage, their energy and good humour are a real gut-wrenching experience. You can't help but dance and sing along with them while being impressed by their sense of rhythm, their bluffing solos and the impressive mastery of each of their instruments. For the music lovers who send, this is the troupe not to be missed when they pass by!

From the band's beginnings to "Step Up", the TOP sound remains faithful to their original musical vision: to penetrate the deep and multidimensional well of what is generally known as soul music and bring all its components together in a singular sound with emotional power.