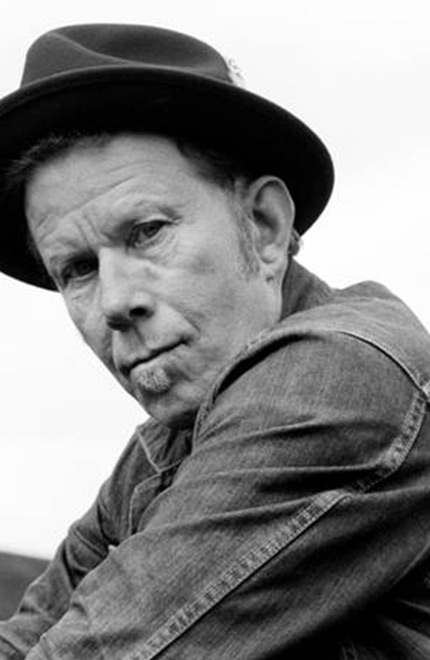 Tom Waits is a character. Somewhere between American-style blues and Bob Dylan's folk, the California songwriter grinds in the face of perfection. His hoarse voice, long smoked by the ashtray, hates to round corners: it must be said that authenticity suits him so well.

"Tunes to fall asleep with his eyes open, stories to be told standing up". That day, the journalist Henri-Pierre Fargeon's pen perfectly encircled the character. Tom Waits, a strange wanderer with a cavernous voice, rocks the blues in his own way, with wild poetry. But qualifying his music is a perilous exercise, reserved for experienced acrobats. Rough rock, some would say. Raw romance for broken mugs, will laugh the others. He prefers to talk about cubist funk.

To tell the truth, nobody walks on his land. His abrasive lyrics and verses, sometimes pushed to the absurd, possess him. His harsh voice - "between that of a bum and that of a clown", as he likes to say - breaks the heart. Tom Waits, a mysterious man in a black suit, wanders around in the open air, zigzagging between derision, joy and melancholy, inspired by the books of his favourite writers, including Jack Kerouac, Charles Bukowski and Allen Ginsberg.

He looks at life because his "imagination needs reality just as the blind man needs his white cane". He seduces with his endearing strangeness, composes in his car and prefers, by far, to be the enemy of evil, for perfection is the enemy of good. Tom Waits, an elusive musician and actor in his spare time, recounts a world that only he perceives. He is the only one with whom we can share a conversation. We let ourselves be intimidated, to the point of going off the rails in the country of our childhood. In short, we remain frozen, our mouths open. If this man has given wings to Norah Jones, King Krule and Jim Jarmush, he also makes his audience soar.

From barman to musician

Tom Waits has done it all: firefighter, car washer, ice cream salesman, before he came into the spotlight. Then he started dreaming. He wants to become a musician. So he takes to the stage, with his guitar and piano, to perform around his home. Herb Cohen, Frank Zappa's brilliant producer, notices him. Tom Waits has something special. He got his first contract with the label Asylum and released his first record in 1973.

The Eagles give it wings

Tom Waits' career is beginning to take shape. Little by little, he assumes his oddity, and so does the audience. As an opening act for Frank Zappa, he makes his mark. But his notoriety was to take off one fine day in 1974, when the Eagles took over Ol'55, one of his songs. At the same time, his new compositions were warmly welcomed by the critics.

Tom Waits is a musician, but film is an art that intrigues him. He appears in several films by Francis Coppola. This time, it is Jim Jarmusch who trusts him, giving him the role of a convict in the film Down By Law. What a great idea! From now on, the California songwriter is also an atypical actor, playing roles that fit him perfectly.

Tom Waits, a trophy on the shelf

This is a great year for Tom Waits. First of all because he appears in the film Dracula, by Francis Coppola, with the success that he is known for. But above all because he won a Grammy Award for Best Alternative Music Album for the first time. His record Bone Machine, released on Island Records, is one of the best of the decade.

The wild weirdness of the big man

If Tom Waits is a legend, he's not the kind to filter through the charts. Not that he's in the shadows, but his personality and state of mind don't fit especially well with the expectations of radio stations and the pop lice of the time. So what was his surprise when his record Mule Variations reached a brilliant thirtieth place in the American charts.

Tom Waits at the Rock and Roll Hall of Fame

At the request of Neil Young, Tom Waits enters the famous Rock and Roll Hall of Fame. "The Jackson Pollock of song," as Elton John describes it, joins the greats. But you know the man: that's not going to change his life. He remains the same, always authentic, weird and, without forcing it, terribly charismatic.

It seems impossible to do better than that! Tom Waits' repertoire is swept away in 2h30, in front of an ultra-participatory audience. The author is at the top of his form, with a masterful voice, a flamboyant sound and a breathtaking staging. Each title brings its own surprise.

Yann, after a concert at the Grand Rex (Paris)

When talking about Tom Waits, you never know where to start. The songwriter is so special and arouses so much curiosity that you could talk about him for hours. He's a real personality. On stage, his charisma impresses. He's unique and his rocky voice sends shivers down your spine. He doesn't lie: he is him, and nobody else. It's a great moment every time!

On stage the set is set up, half-circus: a lion enters and will roar for more than two hours. The voice of Tom Waits shows the way. Possessed, he sings as one shouts to death, stomping his foot, pushing the tempo down and lifting the dust from his stage. He hums tunes to fall asleep with his eyes open, and tells stories to sleep standing up.

Tom Waits, with his dented figure and badly combed voice, has been carrying the strongest draw of American rock since 1973. A rock that, in his own image, he has mistreated and tortured. We've always known it: Tom Waits is a bit out of step.