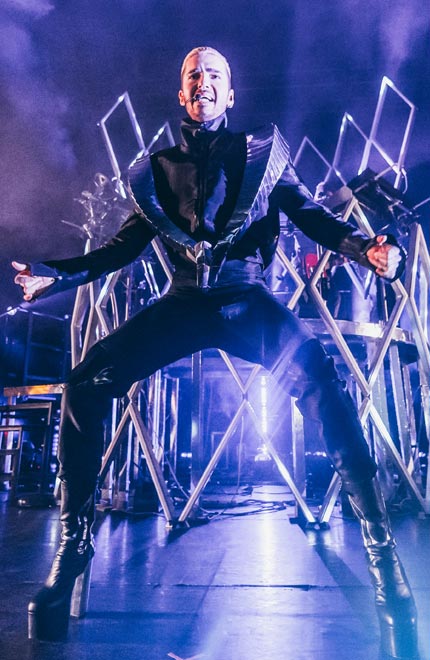 They were able to evolve along with their most loyal admirers. Tokio Hotel, the big sound of the playgrounds, is still a good figure today, with sounds that are more and more close to indie pop. From teens, they have thus become true great men.

Sometimes there are destinies like that, where young German kids, straight from Magdeburg, conquer the world with a teenage rock that makes the walls shake. In one fell swoop, Bill Kaulitz's band finds itself propelled to the top, becoming the soundtrack to thousands of millennials of college years. Some will dare to compare the phenomenon to that of the Beatles, decades earlier, so many shirts tear off and groupies start running madly behind the coach.

With their gothic look that makes girls fall for them, they became the anthem of an entire youth. But the success could have been stealthy, so sudden was it. Yet the Germans held their ground, managing to provoke hysteria wherever they went for several years. So, while it's difficult to repeat the brilliant feats of Schrei and Zimmer 483, the group knows how to reinvent itself to give life to sound and visual productions that are always striking on stage.

Today, no more black and white make-up. They've taken on a new look, as if they were growing along with their fans. Their music has evolved, in the studio as well as live, and maturity now comes to sublimate the teenage rage that still lies dormant in them. Nostalgic at times, they proudly display more electronic sounds, to embody a pop that sparkles much more than an angry din. Tokio Hotel, always on the go!

From Magdeburg to the top of the charts

Noticed in Magdeburg, they began to be approached by record companies. So it was only natural that in 2005 the band presented their first single: Durch den Monsun. And no one would have imagined it a few weeks earlier: it was a hit in Germany. The album, entitled Schrei, only made the wave even crazier, with success all over Europe.

The tour that unleashes the crowds

For its fourth European tour, the band still has a lot of work ahead of it. Each concert is packed, with lines stretching out in front of the venue several hours before the show. The Tokio Hotel Mania still exists, five years after the band's first appearances on Europe's radio stations.  But from that year on, its popularity will decrease.

They have grown up well, the German kids. So why should Tokio Hotel confine itself to its early rock energy. With Dream Machine, the band decides to take a real artistic turn to marry electro-pop sounds. The quartet took the opportunity to start a tour all over Europe, including a remarkable date at the Olympia, in Paris.

A pandemic in the studio

After 43 dates around the world, the global pandemic has brought the group to a brutal halt! But there's no question of them letting themselves go! Even if the time that passes "seems to be an eternity, for our fans as for us", the Tokio Hotel are back in the studio to record a new album. And they intend to get back on stage as soon as possible: 16 dates have already been scheduled with, of course, a stop in Paris.

I have been a fan since the beginning and have attended all the tours of the band. On stage, the level is exceptional. It's a magnificent concert every time. But my best memory remains the Olympia in March 2017 for Dream Machine World Tour. It was just crazy!

Benjamin, fan of the first hour of the band

In a way, you could say they are the Beatles of their generation: groupies everywhere, immediate success. Of course, musically, it's not the same thing, but we can make some amusing parallels. In any case, this band has aged well, and has been able to reinvent itself to grow along with its fans. No more big rock, now it's time for electro-pop that's going well!

A change of style for the German singers of the Tokio Hotel group. The indie electro pop sounds, which mix synthesizers and soaring melodies, sound radically different from their early hits. No more shocking: dressed in a slim-fitted leopard jacket and destroy jeans, the band's singer has adopted a resolutely wiser and trendier look, just like his stage mates!