A rock that runs dry
Ecouter 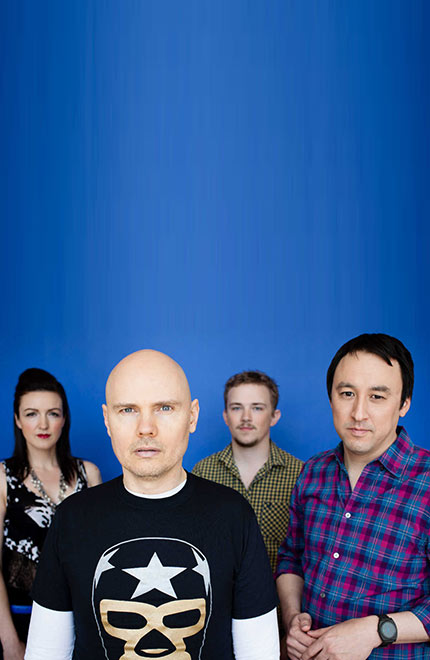 On stage, it's fire. That's how you can recognize The Smashing Pumpkins, an American alternative rock band that got everyone to agree in the nineties. Today, Billy Corgan and his band continue to make their big sound, between raging storms and passages bringing a welcome calm.

From that time, several phenomena have emerged. Above the pile, three groups : Radiohead, Nirvana and The Smashing Pumpkins. Let's talk about the last one. In Chicago, where Lake Michigan rests all the time, angry youngsters decide to put on the guitar, tame the drums and spit into the microphone to draw a sound as powerful as lightning. Yes, these American suburbanites have energy to spare, being almost ready to break the ambient noise to impose a strange, nasal and hoarse voice, variable as one pleases.

They make fun of their detractors and enemies. Instead, they are there to swing their torn melancholy, their millennials of despair and their hymns of muscular witchcraft that scare off the meek pop lovers. The Smashing Pumpkins are heavy, big, like eternal kids who grow up but don't care about becoming adults. Their lives are furiously grungy, and that's what counts. Nothing seems to be able to stop them, not even internal quarrels that could have decimated them for good.

For they are a permanent paradox: music lovers love to hate them, their rock is sometimes tamed by a few rough sweets, and their inability to find their place in contemporary society seems to establish their domination over the world. So on stage, it's all that explodes intelligently into our eardrums, and god forbid, it's an intense and imperishable joy.

Gish, time for the first album

In Chicago, two friends from the Beaux-Arts shared a love of music and decided to found The Smashing Pumpkins. After three years of hard work, they give birth to Gish, a beautiful album, adored by the small underground milieu, but overwhelmed by the Nirvana wave.

That year, The Smashing Pumpkins struck a big blow with an album influenced by David Bowie, which was to become a standard among rock and grunge lovers: Siamese Dream. Many still consider it to be their best record to this day. Talk to the singer of Muse, that's for sure what he will tell you!

The monument of a discography

It is one of the best-selling double-albums in rock history: Mellon Collie and the Infinite Sadness. It's about fear, death, and a rage that only a Joe Strummer seems able to counter. It's a huge box, and it knocks down everything in its path. The apocalyptic single Bullet with Butterfly Wings is proof of that.

Rage in the heart

After a few separations and reformations, The Smashing Pumpkins still has the same energy flowing through its veins and the same rage that makes hearts beat. The men from Chicago then present the album with the fifteen-line title: Shiny and Oh So Bright, Vol. 1 / LP: No Past. No Future. No Sun. NME will write: "the dream goes on".

We hadn't seen them on stage for ages. But here come the Smashing Pumpkins again. We are very happy to hear again some of the songs that marked our youth. As far as set design is concerned, it's the best. Visually, the same, with three large, inflatable and colourful creatures. And musically, they did the job!

Lise, after the concert at the Eurockéennes de Belfort

Smashing Pumpkins is a raw and sincere energy that has been driving us for three decades now. It's so good to hear them, because their rage is contagious and their power gives us a Herculean strength. It's a great pleasure to see them having fun, again and again, on the most beautiful stages in the world!

Proposal number one : Billy Corgan is an angel. And we can prove it. Starting by stating his most vital virtues: a great melodist, a happy owner of an authentic, lively flayed voice and a beautiful brain at the service of one of the few big American bands capable of pulling rock up. Then by listing the little miracles that illuminate the often stifling discography of his Smashing Pumpkins.