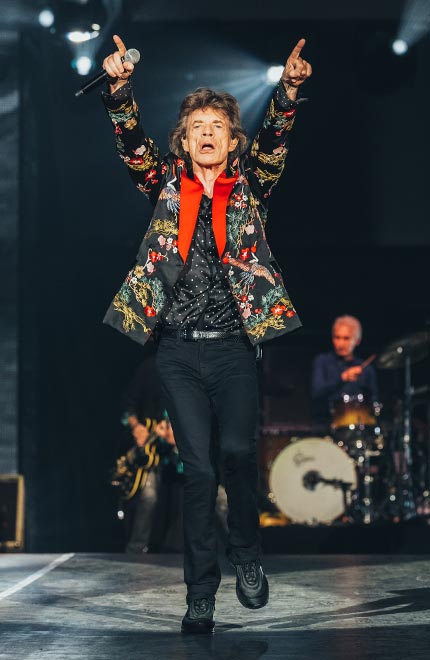 If rock'n'roll had a god, it would probably have four heads and a tongue stretched to the torso. For The Rolling Stones, led by the intrepid Mick Jagger, have always played daringly to bring a rebellious philosophy and crazy energy to the fore. The result: the fiery English have changed the world.

Popular riots, fireballs and hell hits. The Rolling Stones marked rock with a white stone. Flintstones versus iron sulphide: since the sixties, Mick Jagger and his childhood friends have always found the miracle recipe to ignite the stage and the decks of a free, carefree and rebellious world. They have the decibels in their veins, the unbridled rhythms in their hearts. A thousand pulses on the dial. The British quartet makes the riffs scream in the heart of an America or Europe that they have conquered with flying colours. In fact, the entire planet prostrates before these living gods of modern music.

Media rivals of the Beatles, The Rolling Stones laugh at the passing of time. For while wrinkles deepen their faces, their energy and creativity never run out of steam. These guys, beasts of the stage out of cages, seem immortal. Mick Jagger gesticulates like a kid, Keith Richard breaks the house and Charlie Watts manages the voltage. And when Rod Wood comes out of the woods, the combo is a sure winner.

The Velodrome of Marseille witnessed it in 2018, as big as the stadiums are, the walls tremble to the cries of the crowds. Their subversive allure turns the table upside down. Left, right. London's four heroes leap in all directions. Airy they are, as if to embody every note of their most emblematic hits. They have the ardour of the times, the youthful spirit, leaving peace and wisdom languishing on the fingerboard. There's no more need to prove it: for centuries and centuries, The Rolling Stones will dance on top of the pile.

The kids of London

Childhood friends and both in love with Chuck Berry, Mick Jagger and Keith Richards decide to start a band. It is a total failure. It will take a few months for the Rolling Stones to get off the ground, under the impetus of Ian Stewart, a newcomer in the cockpit. It was only in 1963 that the adventure really began to take shape.

Long hair to shock the housewife, anti-conventional look: from their first appearance on the small screen, The Rolling Stones stand out and arouse both exaltation and indignation. That year, the band, determined to put the Beatles' suit and tie in the wardrobe, achieved their first major success with a record of covers with the eponymous name. Jagger's band was an unbounded optimist and even set out to conquer America.

The madness of the Rolling Stones

It's done: The Rolling Stones is a worldwide phenomenon, and it's not the release of the hits Satisfaction or Paint It, Black that will curb their extraordinary popularity. With the Beatles, the mad kids of London become the attraction of a world that is passionate, dumbfounded, for this new hot wave coming from the cold waters of Great Britain.

If the band's logo was created by John Pasche, then a student at an art school in London, it's Andy Warhol who designed the cover of Sticky Fingers, the new Rolling Stones' album. The New York artist then sets the tone for a record of grandiose quality, elegantly launched by the excellent single Brown Sugar.

Always at the top of the charts

As in the whole decade of the seventies, The Rolling Stones take it all. They invade the charts with crazy hits. That year again, while the punk wave was sweeping across England, Mick Jagger's band resisted with force. Better still, the heroes of London set out to conquer, with the release of the record Tattoo You and the incredible single Start Me Up. It's still a huge success!

Half a century later

They are always at the top. The Rolling Stones keep a hell of a peach, filling the stadiums like a pint, in just seconds. The phenomenon is intact. To celebrate their half-century of existence, the band is embarking on a world tour that starts, quite naturally, in London and New York, their capitals of heart. But the French public won't forget the famous unexpected concert in October at the Trabendo, in front of 700 fans, organised fiça after a discreet passage in a Parisian studio. It was a surprise for the conductor!

A shine in full confinement

As a sign of destiny, in 2019 they recorded a track that had remained in the wardrobe, telling the story of deserted streets: Living in a Ghost Town. The single then resonated strongly with the strange topicality of the moment, at a time when half of humanity is confined. The Rolling Stones thus make an unexpected comeback, much appreciated and commented, with this premonitory single, anthem of another world.

I think it's more than a band. They have changed our way of life, they have allowed Americans to discover the black music of the South of the United States, the blues... I thought it was a golden opportunity to see them on stage. And I wasn't disappointed!

The Rolling Stones are immortal. Just listen to their many hits that speak to all generations. And then, it's a moment of sharing with my dad, 59 years old, for whom this group is emblematic. It's a good pretext for us to get together in concert, together.

Do we still have to present them? The Rolling Stones have changed the world, morals, rock. Who would have said, thirty years ago, that these living legends of music would still be in great shape today, in spite of their legendary excesses with a dose of sex, drugs and rock and roll? It's crazy how much energy they still have. They move the stadiums, including the Velodrome in 2018, like nobody else. It's fire!

The legendary riff resounds, powerful lights, cries of the crowd, the joy explodes. The sound is dry, strong. They are the last fighters. Watching them wander on stage under the cheers of 60,000 fans is surreal, moving. They fight against time and win.

Always at the top of the rock. Fifteen years after their last appearance in Marseille, the Rolling Stones set a superheated Velodrome on fire for two hours. The members of the oldest rock band still active have lost nothing of their showmanship.