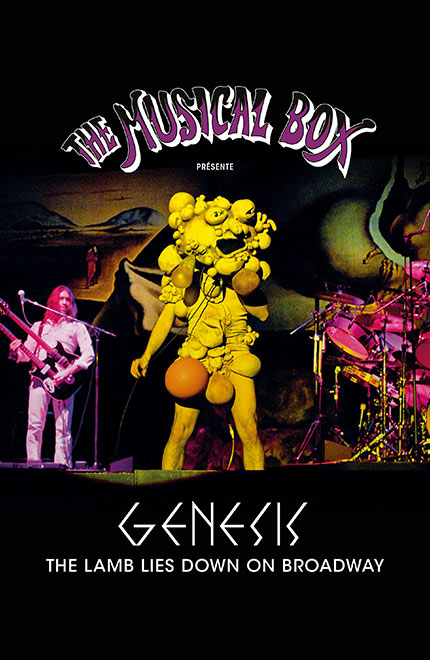 Their mission is to resurrect a legend of the 1970s, to sound like their idols with a comma ready, to replay concerts as if they had been those superstars. And it works! The Genesis musicians themselves sometimes call them "better than the originals" and come to their concerts. It has to be said that The Musical Box is not really a tribute band like the others.

What they want is to create the perfect illusion, to make their audience feel like they are attending one of the original Genesis concerts. Whether it's Selling England by the Pound, which they sometimes play in a Black Show version, or the legendary 1974 tour of the rock opera The Lamb Lies Down on Broadway. They don't hesitate to transform themselves into bookworms before the show. Ready to dig in the archives, as video was rare at the time, to exhume old photos, unearth new details and reproduce the atmosphere, costumes and sets to perfection.

And on stage, led by Denis Gagné as Peter Gabriel, it was as if everything had been frozen in the 70s. As much an actor as a singer, the hundreds of hours spent studying the slightest gestures of their idols bear fruit. From a distance, it is difficult to distinguish the original from the copy. No homage and no nostalgia for this group which simply wants to make the public discover a bygone era. And if some in the halls are old enough to have lived through this period, most of them could hardly remember this visual aestheticism and these sounds that already belong to another time.

But Genesis - the real ones this time - have warned: they plan to return to the stage in 2021. An announcement that delights the members of The Musical Box, all of whom were fans from the very beginning and who definitely don't take offence. When will there be a spatio-temporal and on-stage reunion between the Genesis youth version recreated by the tribute band and the original versions that have certainly aged but retained their genius?

20 years back in time

An ad was placed in Montreal to recruit musicians and singers who were unconditional Genesis fans and the magic was coming back to life. Direction the years 1973 to 1975 and that was it! A period that gave life to the band's best concerts, ones in which Peter Gabriel gave as much importance to his sophisticated music as he did to his ultra-theatrical staging.

In 2005, Phil Collins himself came to attend their performance of the Lamb Show in Geneva. And surprise, he even joined them on stage, on drums, for a song. As for Peter Gabriel, he took his whole family to one of their concerts, to show his children "what their father did". A consecration for The Musical Box, the only tribute band to have received official approval from Genesis.

They had already sold out in 2014, but this tour will be the last on The Lamb Lies Down on Broadway. Originally scheduled for 2020, the Canadians will finally be in France for three dates in 2022. One last time, one of the world's best-known rock operas will come to life onstage, with outstanding musical virtuosity and sets and costumes that are definitely from another world.

Tonight's program is The Lamb Lies Down on Broadway, arguably Genesis' best tour ever. And musically, it's perfect. It's even bluffing in the reenactment, if you put aside a "Peter Gabriel" who has eaten a bit too much. We're projected 30 years back in time and that's exactly what I was asking for.

Sylvie, after a concert at the Olympia

We may be a little too young to have attended in person the gigantic theatrical shows of the Genesis, but we discover them with pleasure with the almost perfect reproduction of The Musical Box! And one can only imagine the original atmosphere, in the biggest halls and under the cries of a furious crowd. A great show!

It's been going on for more than twenty years, since that day in 1991 when guitarist-bassist Sébastien Lamothe had the idea of recreating the music and atmosphere of the Genesis concerts and shows of the 1970s. Since then, The Musical Box has taken the tribute to its climax, searching for the smallest detail to recreate the various tours of the time.

Since October 2004, Rael, the main character of this story concert, has been putting on his leather jacket to go deeper and deeper into New York's undergrounds populated by nightmarish creatures. And "The Lamb" is back on stage with the same costumes, the same 1,124 slides projected on three screens, the same instruments... Mastermind of this very exact replica played to the exact note: the band The Musical Box.