The most faithful of tributes
Ecouter 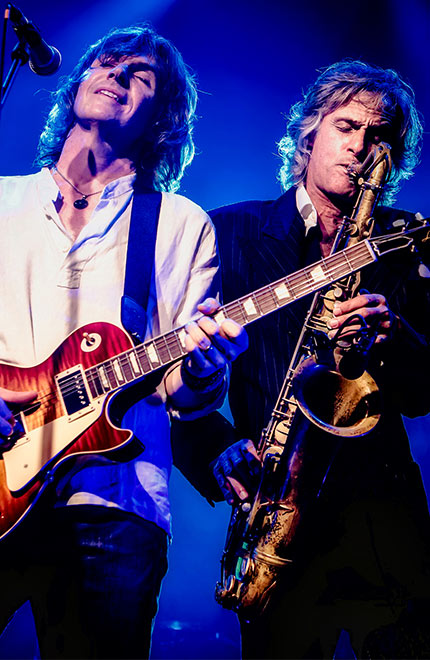 There are groups that time preserves and that popular memory even tends to sublimate. Dire Straits is part of the circle. So, to make this English gem shine ad vitam æternam, Chris White has decided to bring Mark Knopfler's most beautiful songs back to life!

The jewel of rock, Dire Straits is a joyful industrial accident as it sometimes happens on British soil. For no one, oh never, would have thought for a moment that these wild young adults from Deptford would make the speakers of the free world vibrate, against the trends of the time. With Mark Knopfler as frontman, the band managed to put on a British-style rock that, as a matter of course, will never die.

Their daring melodies, carried by the crystalline sound of Knopfler's Fender Stratocaster, are still being reasoned with today. Their efficiency takes to the guts and their vagabond state of mind makes you want to run away from the box. It's good to crack vinyl records, as the music of Dire Straits is so alive. But we sometimes miss the perfume of the stage to remain immersed, for centuries and centuries, in this spirit that gives us balm to the heart. So Chris White, Mark Knopfler's former acting partner, decided to take matters into his own hands and put on his costume to pay a faithful tribute to his friends of yesteryear. With him, time seems to have stood still, as if frozen in ecstasy and admiration, in front of the musical nuggets of these heroes from the suburbs of London.

Admittedly, under the spotlight, the men are not the same, but everything is respected to the letter, as if to rekindle a flame ready to set our second youth ablaze. Yesterday's crazy energy is combined with the present, under the weight of those masterful riffs that have made the reputation of Dire Straits. The work is then celebrated, transcended by Sultans of Swing or Walk Of Life. What a pleasure to breathe this British air that makes us fly, leap after leap, metres above the ground. More than a tribute band, The Dire Straits Experience revisits the most beautiful chapters of the quartet's crazy adventure.

Dire Straits has already reached the top when Mark Knopfler calls in saxophonist Chris White for the Live Aid concert at Wembley. The Bristol-based musician will then take part in the tour of the Brothers in Arms album. Chris White will not forget anything from that period. His love for the sound of Dire Straits will live on through the ages, even after the band split up.

Nostalgic for the belle époque

The project was originally conceived by three ex-Dire Straits who wanted to revive their old repertoire for a charity concert. But gradually, only Chris White, the group's saxophonist between 1985 and 1992, remained. Having become master on board, he was accompanied by six musicians, including guitarist Terence Reis.

All over the world

The popularity of Dire Straits has never ceased. So when Chris White's tribute band hits the road, the halls fill to capacity with a relentless riff. Paris, Rotterdam, Sydney: the whole world remains under the spell of the energetic songs of this English band that has become one of the icons of the eighties frenzy.

Great concert! I'm a big fan of Marc and, really, the most beautiful songs of the band are there. Chris White is top, and you can feel a real complicity with his musicians. Honestly, I recommend going to see this tribute band, even if you are not a loyal fan of Dire Straits. In fact, I brought some friends who only knew the main hits, and they loved it.

Samuel, after the concert in Paris

The Dire Straits Experience is a brilliant and faithful tribute to the English band. It's exceptional to see how Chris White has managed to revive the spirit that once animated Mark Knopfler's band. It's like going back in time to the years when Dire Straits breathed life into the world of energetic, adventurous and relentless melodies.

Here, no deception on the merchandise: The Dire Straits Experience plays the band's hits to the note. We take as little freedom as possible with the work, we sing in the same key. It's fun, because the repertoire is great.

Chris White continues the legend with The Dire Straits Experience, a special tribute to the Deptford band's hit songs. So, certainly, Mark Knopfler isn't on the neck of his guitar. But it's one of the rare occasions to plunge back into the universe of this band whose popularity is still intact.

The Dire Straits Experience isn't just a simple tribute to the band dissolved more than twenty years ago. This formation rekindles the passions of an eternal band, whose music still transcends generations, since it is notably formed by the original member Chris White.