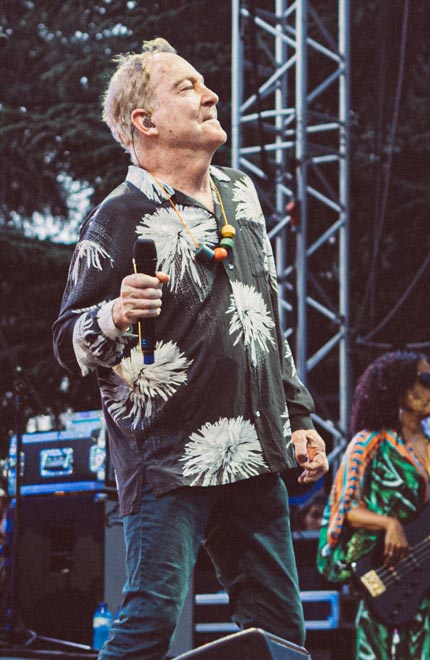 It smells like a party. Because John Lennon's favourite band likes to move his world with his wildly joyful new-wave. His trademark: propelling happy melodies to get the good guys dancing to wild and improvised rhythms.

They know how to ignite the powder keg to make the faceted balls of the free world dizzy. By bombarding the eighties with cheerful hits, The B-52's has indeed become the mirror of carefree youth, who love to shine under the colourful lights of the dancefloors. From the outset, its music, warm and bright pop, sets the scene. Here, there's no need to get worked up. He is much preferred for the drunken evenings, the wandering energy and the unashamedly fun.

The four intrepid people of Athens, an uneventful city in the heart of the state of Georgia, have decided to set our hearts, bodies and good mood on fire. Some will say they are tenderly timid, others, completely atypical. In any case, we come to the same conclusion: this group, guilty of having strangely made even the worst dancers jump, is apart. Its exploit: to have given the banana to the inhabitants of the kingdom of the festival.

Almost as a matter of principle, they have always embodied the most effective vaccine against sadness. John Lennon praised them, Madonna adored them. With their unique blend of decidedly fifties influences and new wave sounds, The B-52's, with Kate Pierson as frontwomen, makes a mockery of old and young, extroverted and profoundly shy: the American quartet simply wants to see us leaping about in all directions. So, ready to take up the challenge?

The first steps on the underground scene

Watered evenings often have no tomorrow. However, sometimes the joy of exhilarated nights can sometimes pass the early morning barrier and last far beyond expectations. That's how The B-52's was born: after a great party and some good jokes. A few appearances at the BDGB club, New York's underground rock mecca, will be enough to capture the attention of the trade press.

It's an international hit

From their first album, the band made a name for themselves and came out of the shadows with the excellent single Planet Claire. It is the beginning of a great career and a golden discography that pop, new wave and dance-rock lovers are now fighting to keep their fishing. The B-52's has now taken its place above the pile of good vinyls!

The Tragedy and the Stop

While a new album - Bouncing off the Satellites - is ready to be released, the terrible news comes in the fall. Ricky Wilson, the band's guitarist, dies of AIDS. It's hard for The B-52's to see a beautiful horizon in the midst of chaos. The merry Americans, this time with a sad face, decide to take a step back for a while, before releasing a new record the following year, which will unfortunately be a commercial failure.

After the shadow, the beautiful light

After several years spent hidden away in their native America, the members of The B-52's decide to come back to the forefront with the excellent album Cosmic Thing. It's an awakening that few critics expected. A phenomenal success: the single Love Shack ignites dancefloors around the world and allows the band to rise to the rank of superstars. But soon, Cindy Wilson will leave the adventure and mark the end of this enchanted parenthesis.

The strong return of the belt

This is their first album since 1992. Yes, The B-52's is back, with the excellent record Funplex, quickly ranked 11th on the Billboard 200. Fans are over the moon, finding a new excuse to go out on the track. Le Figaro even lets itself go to the greatest praise: "we are surprised, from the very first notes, to find intact the same energy, the same fervour, the same fantasy".

It was an opportunity to see a band that never takes itself seriously and that distills a supercharged pop with good guitars and beautiful female backing vocals. Good news: on stage, the B52's are always in shape, they jump, they dance. They look 15 to 25 years younger than their age. We were all conquered.

Lise, after a concert in Paris

The B-52's, it's party time! You can't help but tread the tracks when Love Shack resounds through the speakers. It's almost natural. In short, we love this band because it conveys a permanent good mood and gives colour to our most beautiful evenings. So, when we see them on stage, it makes us feel good and it sharks us for months!

An unmistakable band from the late 70s and early 80s, hailed by John Lennon, Michael Stipe, Dave Grohl and Madonna, the B-52's have left their mark on the pop world with their unique blend of 50's influences and new wave sounds.