The Analogues performs The Beatles 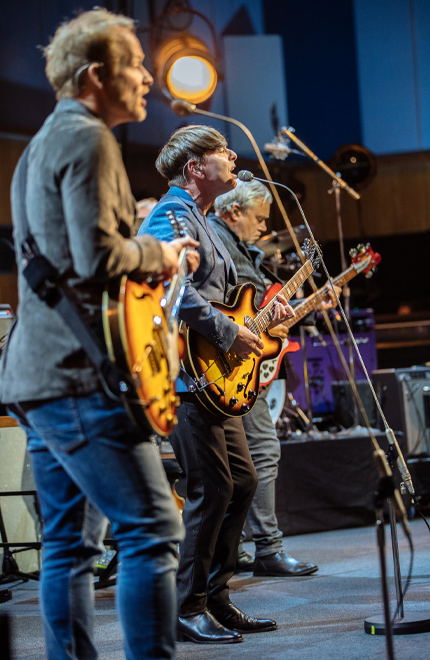 Geoff Emerick, the Beatles' legendary sound engineer, says: "I witnessed something I never thought I would see again in my life. Incredible". So many superlatives to describe the tribute paid by the Dutch tribute band The Analogues to the music of The Beatles.

The band differs from other tribute bands to the Liverpool band in many ways. First of all, the members do not try to look like the Beatles. No costumes or wigs. Another point is that the band only focuses on the repertoire created after 1966 and the end of their tours. Therefore, the songs are from the last six albums of the quartet, never played in front of large audiences. A point of honor is put to restore the sound of the group to the note. And this goes through the material used: a black and white Rickenbacker guitar similar to John Lennon's, a light blue Fender Stratocaster like George Harrison's or a Höfner 500/1 violin bass similar to Paul McCartney's. This is accompanied by a meticulous research in each composition of the Beatles and their experimental use of studio equipment.

Since its formation in 2014, the band has played one concert after another in the Netherlands, Belgium, Germany and the UK. A concert was also held in Paris, at the Olympia, in 2019. Were on the program the complete reinterpretation of the White Album and then Abbey Road, as well as some selections of the group.

After a forced hiatus due to the Covid-19 crisis, the band will be back on the road in 2022 to continue playing the Beatles' greatest hits, down to the last note. You won't believe your ears!