The vanguard of electronic rock
Ecouter 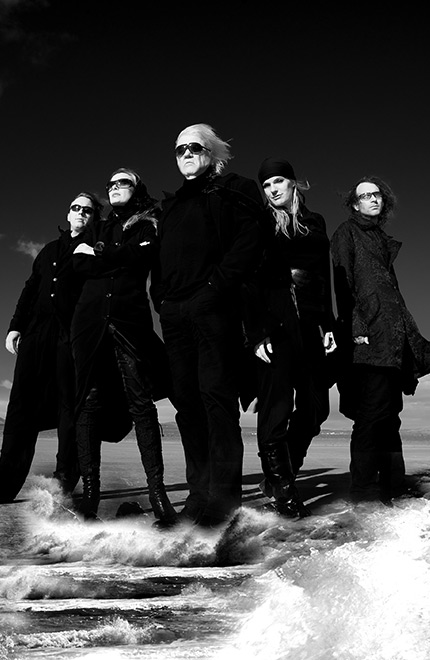 They smacked the sixties rock. With the help of synthesizers, the Berlin Leviathans revolutionized music, proudly displaying sounds hitherto unknown. They even caused a lot of bands and critics to bug: it seems that this is how you change the world.

West Berlin, 1971. On the western side of the Wall, young contemporary people decide to break the codes of a rock that goes around in circles. Shocking and confusing as it may be, Tangerine Dream then takes an unknown planet by storm, like Neil Armstrong treading the lunar craters for the first time. Welcome in weightlessness, where synthesizers respond to the more classical instruments, worn down to the string by the sixties bands.

Minimalist pieces, hovering sounds. With the late Edgar Froese at the controls, the German band revolutionised the world, launching, a few months before their compatriots Kraftwerk, a daring turn towards the as yet unexplored lands of electronic music. They are the future. They imagine it, as a subtle terrain of expression, and shape it with an axe. Because yes, it can't be invented: Edgar Froese, before making music, was a sculptor. Moreover, believe it or not, it was even Salvator Dali who led him, through his surrealist paintings, to assume an avant-gardism long misunderstood by critics.

But no matter what other people say, time has done its work. And if being the first to arrive in virgin lands makes you a pioneer, it is also your responsibility to face the metaphorical bullets, the defenders of traditional rock. Inventing is disobedience, but you still have to resist the weight of mentalities that evolve differently. This is what Tangerine Dream, choosing freedom over convention, originality over ease, has managed to do. This group, with more than a hundred albums on the counter, has indeed changed things, and God knows how much today's young bands, under their fringe of progressive rock and electronic music, owe them a lot.

The creation of a strange creature

Under the impetus of Edgar Froese, Berlin saw the birth of a group that was to revolutionise modernity: Tangerine Dream. For three years, the young Germans will sculpt their sound, again and again, until they reach a hovering result. They are the UFOs of a moving world. Their first record, Electronic Mediation, was released without the agreement of Edgar Froese. The synthesizers are not yet present, but internal disputes are already breaking out.

Misunderstood because it is cutting-edge

The public does not understand, the press is still on its guard. By integrating synthesizers and sound generators into its compositions, Tangerine Dream leaves people perplexed. We had never seen this before. Its hovering music is difficult to tame, but the months go by, and the band goes, little by little, from being intruders to pioneers. Yes, they are avant-garde. Yes, they are creating something new.

The son in the footsteps of the father

Line-up changes are frequent. Tangerine Dream never has the same face. Its tones evolve according to the comings and goings. This time it is the turn of Jerome Froese, Edgar Froese's son, to join the adventure. He asserts himself as a great one, and the adventure continues at a frantic pace. The albums follow one another at high speed, as if creating became a vital emergency.

Edgar Froese, with his head in the stars

"Edgar won't dream any more". This January day, L'Express found the words to say one last goodbye to the precursor of electronic music and contemporary rock. A book is closing, but his hundred or so albums will forever remain a pantheon for all krautrock lovers. Nevertheless, like a tribute, but without stopping creating, Tangerine Dream will continue the adventure, after a few years of pause. Back on stage!

I used their vinyls when I was a teenager. Today, seeing them on stage is extraordinary. Even without Edgar Froese, whom we all regret, Tangerine Dream has lost none of its mystery. The experience is still as incredible as ever. We are on another planet. And to think that this group was born in the sixties!

Adam, after the concert in Sankt Goarshausen

Tangerine Dream has shaken up a whole generation. They have set traditional instruments aside to create a new, more electronic colour palette. It's incredible to what extent this group succeeded, in the 70s, in creating soaring tones which, even today, make sense and are of a breathtaking modernity. These masters of krautrock have influenced thousands of musicians around the world!

David Bowie was a fan, as was Salvador Dali. Jean-Michel Jarre is still a fan. Tangerine Dream became a mythical band throughout the world, banning traditional instruments in favour of synthesizers in the early 1970s.

Like those monarchical dynasties whose family tree is so intertwined and intertwined that it is difficult to draw up a family tree, Tangerine Dream, pioneer band of German electronic music, is one of those sound adventures, so complex that one would lose oneself in trying to summarize them.