The beautiful escape of the folk
Ecouter 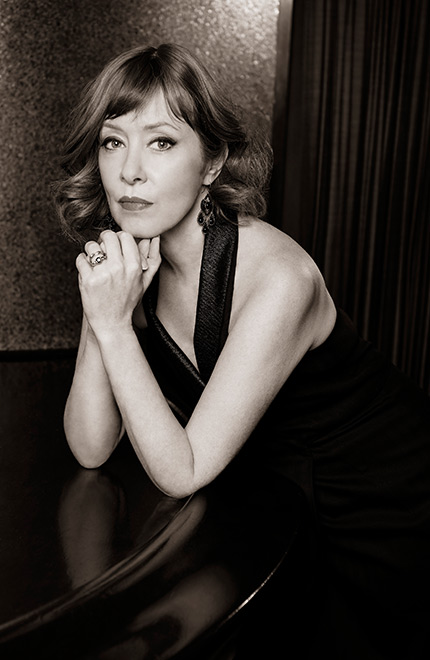 Suzanne Vega has known glory. Yet she remains the same: her sincerity lives on in her compositions, letting melancholy wander freely between the buildings of New York. For behind her melodious and poetic folk, the American songwriter never lies.

Her dry guitar wets our eyes. Her nostalgic melodies carry an engaged folk. It is an evidence that does not fade with time: Suzanne Vega, a storyteller of melancholic stories, always shines with a thousand lights. Texts with millimetre-sized texts, calm songs. The American songwriter, with freedom in her heart, has certainly left the carefree carelessness of her early youth in the wardrobe, but her sincerity of soul and the subtlety of her minimalist ballads seem incorruptible.

Fragile on paper, she nevertheless awakens consciences with strength and conviction. She breathes her words, amplifies the clamour of her strings, and links the records together. Suzanne Vega makes the elegant hits that have forged her reputation resound with simplicity. For the discreet diva, inspired and inspiring, has always sought to reshuffle the cards. Like her single Luka, which courageously tackles the theme of child abuse, which will be nominated three times at the Grammy Awards and will win the MTV Music Award for best women's music video.

As one of the most prominent female composers of her generation, Suzanne Vega is pursuing a beautiful escape with a universal appeal, giving city life and ordinary people a place of honour. Lightweight, she deliciously sprinkles her folk with a thousand nuances, even marrying the silhouette of a bossa nova who cradled her childhood wandering in the Spanish Harlem neighbourhood, the Mecca of Latin culture in New York City. Today it is a great lady of music who appears on the stage, sublimating the stories, sometimes unfortunate, that are written before her eyes with rigour, simplicity and poetry.

She tamed music by drawing inspiration from Leonard Cohen and Lou Reed. After a few concerts in the clubs of GreenWhich Village, and after completing her studies in literature, the songwriter landed a contract with the A&M Record label. She started recording her first record, which was released the following year!

From shadow to light

Suzanne Vega presents Solitude Standing, her second album. The world then discovers a committed and intoxicating artist, who leaves Luka and Tom's Diner, taken up by the producers DNA, on the radio waves of the five continents. Far from the cafés and clubs of her early days, the American songwriter reached the top, winning three Grammy Award nominations and the MTV Music Video Award for best women's music video. A little anecdote: this album will even be used by German researcher Karlheinz Brandenburg for his research work that will lead to the development of a new digital file: the MP3.

A new lease of life

At the dawn of her fourth album, entitled 99.9F°, Suzanne Vega meets Mitchell Froom, producer of Los Lobos and Elvis Costello. If he will become her first husband, the American artist brings her a second breath to go and search, again and again, for new and innovative atmospheres.

This is what is known as a long dry spell. Suzanne Vega seems to combine her glory with the past, facing, in uncertainty, the end of a golden age. "I got fired from my record company, and the economic crisis came," she says. I used to get paid to write songs". Now I had to write songs to pay myself. But a great lady of folk music always comes back. She lays it all down flat and comes back a few years later with the sumptuous Tales from the Realm of the Queen of Pentacles.

We spent a charming evening in acoustics with Suzanne Vega. She was really delighted to be there, to present her recent work and to please us by interpreting her most famous compositions.

The ultimate class! Pierre, after the concert in Issoire

Suzanne Vega gave a second wind to folk music, becoming the almost natural heiress to Joan Baez. Today, her hits don't age: they even embody a flawless modernity. And what about her most recent compositions: sincere, poetic, audacious. There are thousands of reasons to see the American songwriter on stage, but the main one is her authenticity.

Suzanne Vega in acoustic version ? The singer certainly hadn't got us used to over-orchestrated records, but the new ultra-stripped coating of her songs is a shock. Exit the pop and slightly electro arrangements. The blonde lady has opted for a luminous folk-jazz, which underlines the finesse of her writing and the stainless character of her hits.