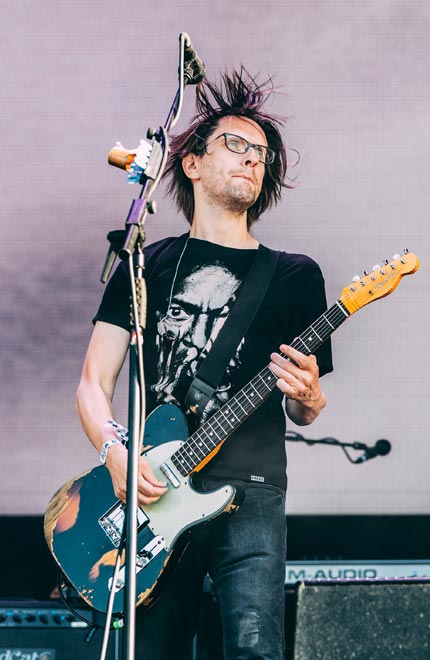 He is the divine child of a rock that is as progressive as it is progressive. Steven Wilson, a discreet quinqua inclined to stories that awaken consciences, could have been David Gilmour's direct heir. Ambitious with an exacerbated creativity, he decided to be much more than that.

His mother listened to Donna Summer, his father, Pink Floyd. So when Steven Wilson decides to breathe new life into a dormant progressive rock, he can't help but splash his luminous melodies with demanding pop. Behind his rectangular glasses, the reflection of a square man, straight in his boots, he sees the world from another angle. He juggles, barefoot, with the effect pedals, as if to colour a chiaroscuro sound. He upsets our heartbeat, shakes up the shackles and shakes up the clichés of a society in need of life.

In a way, Steven Wilson is to the present what David Gilmour is to the eighties: a guy sensitive to golden technicality, preferring the praise of simplicity to soulless complexity. He brutalizes softness, warms icy hearts: his performances break down the obvious, question musical preconceptions with virtuosity. The question then arises: should he be seen as an outstanding guitarist, a singer with a haunting voice or a producer with overflowing creativity? In short, all three. Because Steven Wilson will never be satisfied with just one cap.

So be it: the guitarist from Hemel Hempstead, a quiet corner under the grey English sky, flirts with emotions, torn between his adult lucidity and his childlike gaze. He weaves strings and keyboards, taking turns to find melancholy darkness, oxygenated softness and realistic utopias. So, if sincere beauty is looking for its alter-ego, it probably has to look to Steven Wilson. For, with his energy as raw as it is explosive, the former leader of Porcupine Tree is a rock'n'roll claw, far from revival.

With his friend Malcolm Stocks, Steven Wilson gives birth to Porcupine Tree. Directly inspired by the recent compositions of Pink Floyd, the band explores a progressive rock with psychedelic accents. It wasn't until 1992, and the release of On the Sunday of Life, then 1995, and the album The Sky Moves Sideway, that the first, albeit relative, successes were achieved.

Steven Wilson now wants to focus on his solo career. Porcupine Tree is no longer the priority. Insurgentes, his first record, is released, in which he confirms his appetite for progressive rock, eighties sounds and the ambient air of metal.

Steven Wilson makes his way. That year, he presents Hand, his fourth album. The critics were stunned, his audience ecstatic. Once again, the British prodigy puts everyone in agreement, with an album as inspired as it is inspiring. It's one of the most beautiful progressive rock records since the end of Pink Floyd, some would say.

When the Helfest acclaims it

He himself is surprised by the invitation, even a little anxious, for fear that the world of metal will not understand his universe. However, Steven Wilson decides to take the gamble: he comes on stage at the Helfest to present To the Bone, his excellent album released the year before. Surprise: the audience cheered him, captivated by his goldsmith's technique, his mystical sounds and his unique personality.

With an extremely precise, graphic and colourful concert, Steven Wilson proved that he is the master of live performance. Clear messages, a muffled atmosphere at the start, which then passes through joy and sadness: you feel transported. It's a concert that leaves you admiring.

Celine and Chris, after the concert in Lyon

Steven Wilson is the next generation of Pink Floyd. With modernity and meticulousness, he deploys a progressive rock that questions as much as it leaves one dreaming. The British songwriter amazes us at every appearance. On stage, it's a real performance. He moves from one atmosphere to another, virtuosically pointing out the shadows of contemporary society. You must absolutely go and see him!

This Briton has single-handedly handed over a musical genre that was thought to be destined for the geminas: progressive rock. A virtuoso on the instrument, he lines up choruses that speak volumes of his admiration for Pink Floyd soloist David Gilmour.

Ex-leader of the progressive rock group Porcupine Tree, the musician has managed to break out of this niche, often judged to be outdated, even old-fashioned, to also tickle the ears of fans of rock in the broadest sense, even pop. It is therefore a mixture of a little of all these styles that he presents live during a concert divided into two parts, interspersed with an intermission of about twenty minutes.