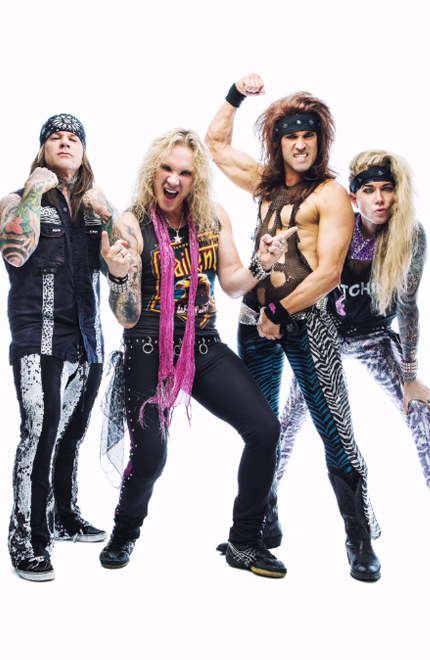 If you're looking for a good dose of self-deprecation, trashy lyrics and big metal riffs, then Steel Panther is for you! For the past ten years, the band has been making a lot of noise and reviving the glam-rock of the 80s in a succession of hilarious looks and hits.

And to believe it, you have to see them on stage. If you're a fan of fluorescent leggings with anatomical details, long hair and glitter, you'll love it. And if not, Steel Panther's straightforward humor might just sweep you off your feet, between two heartfelt bass lines.

Because the Californians assume and proclaim loud and clear their image of decadent rockers, a kitsch version of the great hours of Bon Jovi, Mötley Crüe or Van Halen. What do they want? Nothing less than to find the good old "Sex, Drugs & Rock'n Roll", a motto they themselves practice with great assiduity. Well, if we believe the verbal jousting that almost serves as an intermission between their songs.

But if their audience laughs as much as they headbang, it would be wrong to reduce the unbearable members of Steel Panther to their status of crowd entertainers. Because if they originally played a lot of covers, they now deliver their own tracks. And when it comes to sending the lyrics and holding the notes, we feel that Michael Starr knows what he is talking about. Between the content and the form, the boys of Los Angeles play the second degree with talent and that makes good! 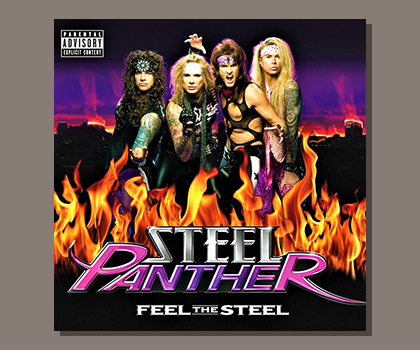 Metal Shop, Metal Skool and finally Steel Panther. Satchel's band had to change names twice to get out of the Los Angeles clubs. In 2009, their filthy genius is finally recognized and they sign with Universal for the very good Feel the Steel which also marks the beginning of their original titles. Hits such as Asian Hooker stood out from the crowd and are always sung in chorus by the audience at their concerts. 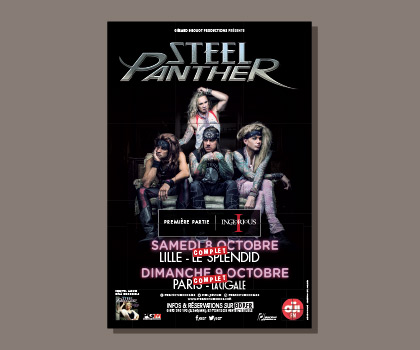 In 2011, the band releases Balls Out and its unambiguous hits Supersonic Sex Machine and If You Really Really Love Me. They followed this up with their second European tour and set down for the first time in Paris the following year to blow the audience away at Le Bataclan. A rendezvous in the City of Lights that would become almost an annual event.

Can we make more clichés?

If the shortest jokes are the best jokes, this adage definitely does not seem to apply to Steel Panther. With Heavy Metal Rules, the band pushes the envelope even further, delivering a laugh-out-loud clip on Always Gonna Be a Ho. A salacious joke like the ones we've got used to from these four indomitable people over the last few years. And which, surprisingly, don't seem to get any wrinkles.

A delirious and regressively enjoyable atmosphere! On the sound side, it sends heavy, heavy metal as we like it. On the show side, Steel Panther is pure... Steel Panther ! It's outrageous, it's full of glitter, it's obscene and very honestly, I love it ! And considering the comments at the end of the show, I wasn't the only one.

Mathis after a concert at the Bataclan

Come armed with a huge dose of second or even twelfth degree to appreciate the Steel Panther show at its true value. These four are unleashed and never stop. There's energy, jokes that are more than dubious and clothes that are way too tight to sell. But you always come out with a smile on your face, feeling like you've had a great glam-metal moment, just like in the good old days.

Michael Starr, Satchel, Lexxi Foxx and Stix Zadinia are on fire. The finesse of the lyrics is once again in evidence, [...] the positive vibes invade the Bataclan. Of course, the "sketch" part of the set once again takes up quite a lot of space. Nevertheless, and to everyone's surprise, the quartet has expanded its repertoire. The jokes are flying at full speed, Paris is laughing again and again, but with a new breath, finally!