The grunge is dead, long live the grunge? 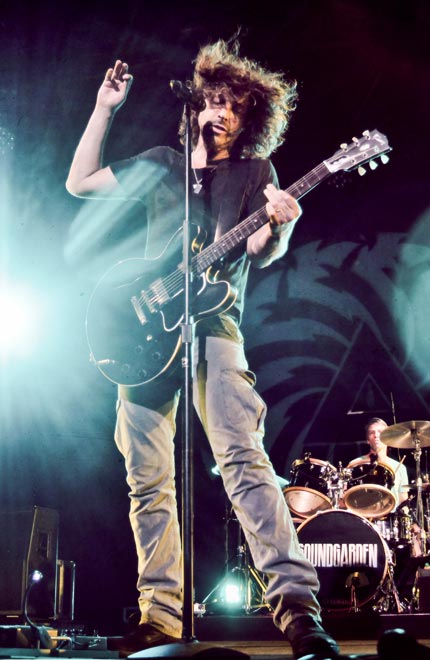 Soundgarden is already in the pantheon of the few bands that have made grunge a musical genre in its own right, a name created only for a few talents who didn't want to fit in. And standing next to the blonde Kurt Cobain now, hidden behind his curtain of curly hair, is the very tall Chris Cornell.

Even today, it is difficult to define the style of the group in one word. Alongside Nirvana, Alice in Chains or Pearl Jam, Soundgarden mixes genres. Some tried to classify them with heavy metal bands, but long hair aside, it didn't really fit. Punk ? Definitely not fast enough! Rock ? Certainly, but not the one we used to hear at the time. So grunge. Not really a genre, but rather a label hastily glued on to define this handful of bands who wanted to bring back a bit of darkness in the rain of glitter that submerged the 80s.

And at the controls, the big silhouette of Chris Cornell and his impressive, trailing voice that covers almost four octaves. And which makes us take off from the very first notes in a hovering trip or for a completely electrified rollercoaster session. A thunderstorm thundering between surrealist hardcore and classy post-punk that will mark the following generations. "Soundgarden took the rock I love and made it smart. Cornell's dark and poetic intellect was not something you find in heavy metal," says guitarist Tom Morello, who acknowledges the huge impact the band had on the early days of Rage Against the Machine.

For sure, the Soundgarden hits that made MTV's heyday, with Black Hole Sun in the lead, are now part of the myth and legends that have gone too soon.

At the age of just 20, the Seattle boy founded Soundgarden from the ashes of his previous band, The Shemps. The band's name comes from a statue, A Sound Garden. Located near Seattle, the wind regularly transforms it into a bewitching musical instrument. And four years later, the band is the first to sign on a major label, A&M records, paving the way for other grunge bands.

While Soundgarden was successful in the 1980s, sales skyrocketed in the 1990s, just a few months after the tragic end of Nirvana. With Superunknown, Chris Cornell finally reveals himself completely on the planetary hits Black Hole Sun or Spoonman and the band trust the first place in Billboard, also taking the Grammy for best rock album the following year.

From apogee to break-up

However, the group's hour of glory will be short-lived. An album later, the exhausting touring rhythm will take the edge off the band, which has the suffocating feeling that their fans are paying "just to ask us what songs to play". The atmosphere deteriorates until 1997, when the members decide unanimously and at the height of their glory, to split up.

It took twelve long years to hear about Soundgarden again. The band reunites under the anagram Nudedragons for a concert in 2010 in Seattle, where it all began. They were soon unmasked and embarked on an international tour, then joined together in the studio to release King Animal, "a sound as timeless as it is anachronistic, a strangely cool beast to meet in 2012" according to Rolling Stone. And for the four members of the band, there was no doubt, it was back on tour!

Another grunge legend dies out

In the middle of a tour and while a new album seemed to be on the agenda, Soundgarden and the rock world are in mourning. Its leader, Chris Cornell, is found dead in his hotel room. Even if the band found a new lease of life, it could not continue without its legendary singer and disappeared with him.

Completely excited by this surprise reformation, I was not disappointed! The sound wasn't perfect but Chris Cornell played the caveman again and his voice didn't move a bit. Still as powerful on the hits we know him, accompanied as always by his brilliant musicians.

Candice after a concert

Soundgarden will remain a cult rock band for a long time to come, having paved the way for the grunge movement of the 1980s. With a heavy sound, a golden voice and by making their brutal despair cool for kids of a whole generation, they managed to make their name in the legend.

Chris Cornell was a grunge god and one of the most powerful rock singers. He brought his dark side to his songs, right to the end.

In a musical landscape still shocked by the suicide of the leader of Nirvana, Soundgarden won the Grammy for Best Rock Album in 1995. Black Hole Sun, a haunting grunge ballad in which his voice spans almost four octaves, spins heavy on MTV.