The last of the jazz giants
Ecouter 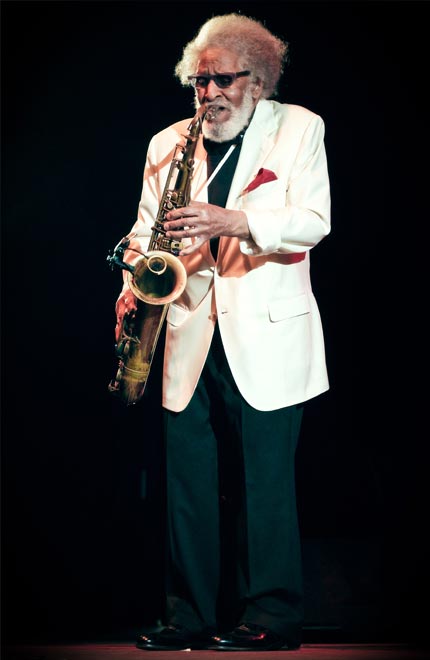 "An aggressive musician who always has new ideas". When Miles Davis spoke of him, words were always the basis of praise. No wonder, after all, because Sonny Rollins is a jazz giant, and behind his boldest notes, the times pass.

His breath is to jazz what the ocean is to the surface of the globe: an indispensable part of life that amazes us with its sublime allure and intimidates us with its immensity. Sonny Rollins is the last of the giants, while his buddies from before, including John Coltran and Jackie McLean, have joined the paradise of sensitive souls. But he is still here, a tenor saxophonist who carries the torch of a time when Harlem was on the rise. His melodic rigour, his characteristic style of playing, his improvised solos that take us to an afterlife: the American musician has spent his life sculpting masterpieces that remain the pinnacle of excellence.

Just a teenager, he was already surprising his world. He bluffed Thelonious Monk, Jay Jay Johnson, Bud Powell and the like. A workaholic, Sonny Rollins had a thousand reasons to get a big head. But humble and creative he would stay. Thus, always taking care to opt for unexpected detours, the New York child, today with his white beard and tinted eyes, has influenced entire generations of artists.

The saxophone is his voice. So while he breathes, he composes. Music is the hymn of his life, reviving in him, as he enters the stage, the twirling young man who embraced the crowds of yesterday. Only his skin seems to have accepted the stigmata of time, for internally he mocks age. To tell the truth, his only obsession is to innovate, again and again, to bring us to breathe the pure air of jazz.

Former pianist Sonny Rollins fell in love with the saxophone. At the dawn of his adolescence, he already amazed the adult clan. Theolonious Monk decided to take him under his wing, even allowing him to record his first compositions. Despite a few run-ins with the law, his career took off in 1953, when he presented his first record, with the illustrious Miles Davis at the piano.

The masterpiece of the century

That year, Sonny Rollins made multiple records. But it is Saxophone Colossus who will mark the spirits. Acclaimed by the critics, it is one of the most beautiful albums of the century, as jazz lovers will testify. Later, the record would inspire many artists around the world, including Claude Nougaro, who would cover the excellent St.Thomas.

Daring is its fuel

This is a turning point in his career. With The Bridget, Sonny Rollins ventures into the land of free-jazz. For after a year's break and a beautiful questioning, the New York musician seeks to bring a new breath to his music, as if in a permanent quest for the unattainable perfection.

In studio with the Rolling Stones

It's a collaboration that has given all jazz purists something to grind. But Sonny Rollins didn't care: he wanted to try something new. So when the Rolling Stones asked him to record three songs on the Tatto You album, it was a big yes: "They contacted me, I didn't know much about them," he said later. I knew their names of course, like the Beatles, but I didn't know what they were playing. So I experienced this possible collaboration as a one-off experience".

Blowing out the fifty candles

After gleaning several Grammy Awards at the beginning of the millennium, Sonny Rollins decided to celebrate his 50 years in the business. He then proposed a magnificent performance at Carnegie Hall in New York, as if to remind himself of a time that now seems to be over. This is proof that his longevity is exceptional: who else can say the same?

When I was told I was going to see Sonny Rollins, I was smiling up to my ears. So when he came on stage with his saxophone, for a jazz lover like me, it was a great moment. The whole concert was incredible, worthy of a giant of his time.

Didier, after a concert in Roubaix

Sonny Rollins is a huge musician. He has left his mark on a century of jazz, as a master who has been able to impose his style and personality for decades. If Miles Davis admired him, it is not by chance: he is a monument like very few others. So when he appears on stage with his saxophone, we always have the impression that we are living a moment that counts in the history of music.

As rare as expected, the tenor saxophonist captivated the audience. Or rather, the years seem to have no hold on him, who humbly claims to continue his apprenticeship, while the most serious jazz encyclopaedias and the most versatile public rumours commonly see him as the last of the giants.

The very fact that this immense musician is still alive constitutes a prodigy. John Coltrane, Miles Davis, Max Roach or Art Blakey, with whom he collaborated, have all joined the jazzmen's paradise, leaving Rollins with the heavy responsibility of carrying the torch of a generation that has known the developments of be-bop, hard-bop, free-jazz and others.