The boss of the West Coast
Ecouter 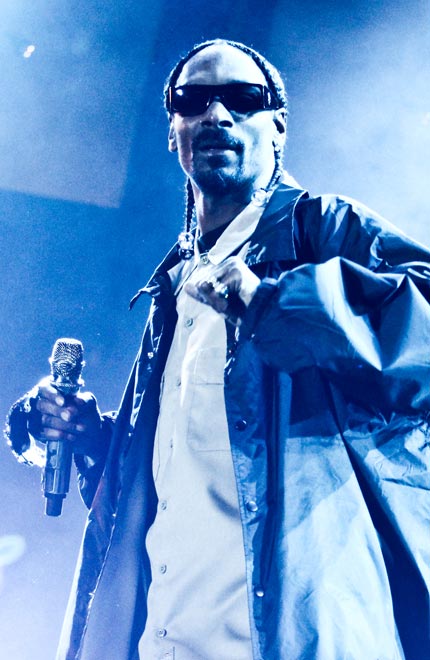 Dreadlocks, gold chains and sunglasses: under his bling-bling guise, Snoop Dogg has become, as albums are born, the absolute master of the West Coast rap and hip-hop scene. Today he is the strongest link in a musical state of mind that has taken everything in its path.

Snoop Doggy Dogg. The native of Long Beach, on the outskirts of Los Angeles, has known it all: gang wars, jail time and, above all, global success. The Californian rapper, a recreational smoker and intelligent provocateur, has always maneuvered like a leader to make a place for himself in the social lift and get down to the top floor: the roof of the world. With its nonchalant flow, somewhere between laziness and skilful revolt, Snoop is the Atomic dog of the street.

For if big cars, light bikinis and golden watches could have altered his judgement, the child of cosmopolitan California has not forgotten where he comes from. In his characteristic style, he makes it a point of honour to never disguise his naturalness. Like many, Snoop has had a thousand opportunities to lose himself in the bowels of glory, to indulge in the ease of radio-compatible hip-hop or to be duped by frivolous pop. But out of the question! Shocking in bling-bling, with audacity, humour and derision, and unleashing the wrath of the censors remain his favourite leitmotif. It's obvious: the fire of the limelight has simply amplified his inner flame.

Yes, this basketball lover, catapulted by the legend Dr.Dre, god by nature of the US rap culture, helped change the world. From the West Coast, he has dared to do anything, even to stand up to the Donald Trump administration head-on, to defend the African-American community body and soul, and to fight with blanks against the injustices of his country, one of the most unequal on the planet. So when the California wildcat takes the stage, it's not just a rapper with a gold necklace that shows up, but a big name of our time!

Immediately in the big bath

Spotted by Dr.Dre's half-brother, the young Snoop Dogg is invited to participate in the soundtrack of the film Deep Cover. His talent and his singular style already impresses. So it was only natural that after this successful experience, Dr. Dre, a former member of N.W.A., asked the Long Beach rapper to join him in the studio to help record the legendary album The Chronic, which was released the following year.

The gold rush is Snoop

Known as the white wolf in the US, Snoop Dogg, marked by the death of Tupac, seeks to explore new horizons. He takes the opportunity to release, at only 28 years old, his autobiography and to take an interest in cinema. Hated by part of the political class (no wonder), he waited until the following year to release Paid tha Cost to Be da Bo$$, his sixth album on which Pharrell Williams, then leader of the Neptunes, appeared.

No border between rap and reggae

Snoop Dogg dares to take the plunge, even if it disconcerts some of his early fans. Risk is his driving force. So, for the first time, the American artist switches to reggae. To complete the experience, he will even travel to Jamaica a few months before entering the studio, as if to soak up the pure air of Bob Marley's land. He returned to his roots two years later, with the excellent Bush album.

After a short escapade to gospel music, as if to pay a heartfelt tribute to his childhood, Snoop Dogg is back with the album I wanna Thank Me. The record, a mirror of a career, is of great quality and is hailed by critics, as the Mouv' chronicle testifies : " beats laid back, basses well rounded or elastic, we navigate with pleasure on the waves delivered by Snoop".

Behind his narcissistic air, Snoop really tripped with his audience. He loves what he does, and you really get into his world. He wants us to dance with him, to shout his name: in short, it was really great to see a mega star like him. We had a great time: a real outlet for the insiders.

Sami and Sandoz, after a concert at Bercy

Snoop Dogg is a West Coast figure. Along with a few other renowned rappers, including his master Dr.Dre, he has completely turned the table upside down by imposing rap on a global scale. He's a great man, who has lost neither his ardour nor his nonchalance over the years. When he comes to France, it's always an event: you absolutely must see him at least once in his life.