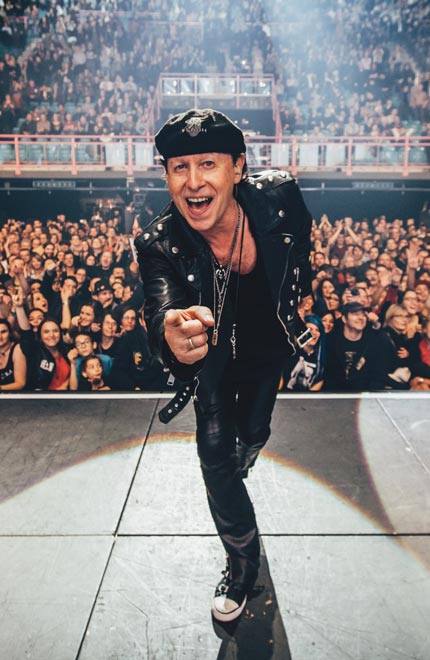 They have stung rock lovers to the core, slipping a rebellious venom into their veins by surprise. Scorpions is not a band like the others: they have changed the game, going as far as, as they say in the most laudatory fables, boosting the birth rate in Europe.

When the scorpion appears, even the most reckless have a movement of retreat. The animal, wild and tough, frightens with its venom, but fascinates with its agility, beauty and composure. It's a little bit the same with Klaus Meine and Rudolf Schenker, as the masters of Hanover have taken hard-rock aficionados by surprise. Their ballads shook hearts, lit up the world and enchanted the first loves of entire generations.

Powerful riffs, unifying anthems, subtle melodies: against all odds, Scorpions is a gentle artifice in a world of brutes. The band forges hopes, breaks down tension and has fed the flirtations of post-adolescents. How many thirty-somethings are the fruit of a Still Loving You? Yes, these terrible children from West Germany, under their leather shells, seem to have given wings to some.

It must be said that listening to their most emblematic hits, living on love and fresh water takes on its full meaning. Do we really need more to appreciate this big sound, this hellish fishing and this paradoxical lightness? Every note is love at first sight. A fiery show, seductive energy, unstoppable refrains: under sounds to make space-time bugger, the Lower Saxon bosses, influenced by the flights of Led Zeppelin and the acrimony of Deep Purple, continue to make the shadows waltz and lighter dance.

West of the wall

Hanover, west of the wall of shame. Carefree young teenagers come out of a drunken party. On that day, from the three-quarters empty glass Scorpions are born. At the instigation of Rudolf Schenker, the band plays covers in English, usually from the British charts. At the top of the gondola: the Beatles' most beautiful hits, then at the height of their career.

The arrival of Klaus Meine as a singer will change the course of things. The band changes course and composes a psychedelic rock debut album entitled Lonesome Crow. Scorpions began to enjoy some success in Germany, but went completely unnoticed elsewhere.

After a few line-up changes, the band with Klaus Meine and Rudolf Schenker starts its formidable adventure on the asphalt of hard rock. Scorpions began to make a name for itself in Europe, but it was above all the release of Virgin Killer in 1976 that brought the band out of the shadows. Even Japan fell under the spell!

At the top of the poster

It's an earthquake! The single Still Loving You peaks weeks at the top of the charts. More than just a song, it is a hymn to love that has been taken up by the whole world. Scorpions goes down in legend, with a song that is said to have had a surprising effect on the birth rate in some countries. In France, the group makes its mark on people's minds and history: on 29 February, they inaugurate Bercy by becoming the first international group to perform there in concert.

This is a historic event, the world is in turmoil: no, it's not a dream, the Berlin Wall has fallen. So, of course, it doesn't leave Scorpions, Germany's biggest band, indifferent. The geniuses from Hanover record the track Wind of Change in the same breath. Its whistling melody is a hit. It's a worldwide hit!

Scorpions bids farewell with a world tour. But it was without counting on their unconditional love of the stage. A few months later, the band announced the recording of a new album. Scorpions is back: the band of Klaus Meine and Rudolf Schenker has definitely retired, even including Motörhead drummer Mickkey Dee in 2016.

Not to be missed under any circumstances! They have nothing to envy the younger generation, they are real beasts of the stage. They've got it going on, it's moving all over the place. The singer still has a perfect voice. It's a real kiff! What a concert, what energy.

Paul, after the concert in Dijon

Scorpions is pure energy. The German band has lulled a whole generation with beautiful and powerful ballads like we have rarely seen before. They have thus become, through time and hits, the new masters of hard-rock. So, I might as well tell you that in concert, it's dry. They're still in great shape!

Scorpions are immortal hits, electrifying guitar riffs, a magnetic stage presence. He is the legend of live rock, in the flesh, in the sweat too. Festival-goers enjoyed the concert in many ways: glued to the stage, screaming the lyrics at the top of their lungs, sitting more comfortably in the stands, on the fringe of the crowd.

On this stage, Scorpions occupies a special place, providing saturation levels compatible with the domestic pleasure of the FM waves. Energetic riffs certainly, but always at the service of melodies that can be whistled.

The New Republic - The World