The pope of Latin rock
Ecouter 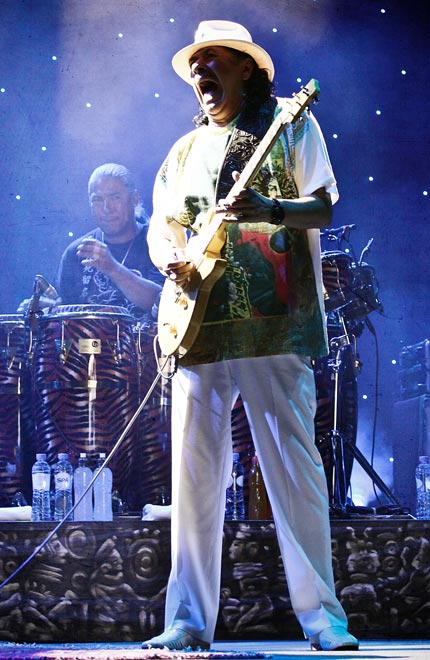 A Woodstock revelation, Carlos Santana has built his life to the rhythm of a spicy rock, imbued with the soft colours of Latin music. With his great guitar flights, it's a certainty: this philanthropist, influenced by John Coltrane and Miles Davis, hasn't finished getting high yet.

"If you can talk to birds, you can talk to men. This luminous phrase, breathed by his father, resounds every day in Carlos Santana's head. Of course, it is impossible to verify whether his guitar flights touch the guardians of the sky. What we do know, however, is that this Californian Chicano, with sounds of a thousand colours, has shaken the free and gently rebellious souls of Woodstock. For on that summer day in 1969, the Latin-rock pope, then unknown to the battalion, conquered and convinced, gracefully mesmerising a crowd as far as the eye could see. Gliding over the ropes: with his snake-eyed Gibson, it is obvious to the world: this guy is a genius.

Since then, the guitarist has cemented his status as a gifted rock musician. Drugs less, wisdom more, the child from Jalisco, who arrived in the States as a teenager, never intended to rest on his laurels. Music is his life, his work, his faith, and he defies time and labels to sculpt sounds full of innovation.

When you say that Santana is apart, it is not just a formula for style. His instrumental flights of fancy are his prayers, his musical excursions into Latin lands, his ritual. Nourished by spirituality, this rock genius, adulated by the press, idolised by the public, mixes influences as peoples meet. North America embraces Mexico in a utopia where people live together, regardless of their skin colour.

In the land of peace and love, Santana slaps the world in the face. With mescaline in his veins, the guitarist fights his hallucinations with boldness and ecstasy. The crowd appears like an ocean of flesh, his guitar like a restless snake. The performance puts everyone on the floor: in just a few minutes, Santana has written the legend.

After a few trips to psychedelic lands and a popularity on the rise since Woodstock, Santana returns with a melodious album that will make a splash. The album Amigos, recorded in San Francisco, is a huge success. The critics are full of praise. It is confirmation that the 1969 summer day's stunt was not a one-off accident.

Thirty years after Woodstock, Carlos Santana confirms one thing: he prefers the sun to the shade. His record Supernatural is a monumental success, thanks in part to the excellent song Maria Maria. A shower of Grammy Awards rained down on the California guitarist.

That day when Mona Lisa spoke to him

There, as he stands frozen in front of the Mona Lisa, Mona Lisa would have spoken to him. At least that is what Carlos Santana tells the press. "She asked me if I remember when we were in love and I said yes," he confides to the journalists. Is it true, or is his overflowing imagination playing tricks on him? It's a mystery. In any case, the result is a majestic mini-album entitled In Search Of Mona Lisa.

Excellent Santana concert in the bullring. The guitar hero offered us 2h30 of music and demonstrated once again his technical mastery of the electric guitar, but also his kindness and fishing on stage. It's really great to see a legend like Carlos Santana having fun playing and chatting with his audience.

Estelle, after the concert in Nîmes

Since that summer day in 1969, when he conquered Woodstock, Santana has not stopped. He continues to perform a series of brilliant feats of genius, proving his exceptional longevity. You only have to see him on stage to understand how the American artist, who hasn't forgotten his Latin roots, tames time. In concert, he even takes great pleasure in flying his Gibson towards ever more innovative sounds. He is one of the best guitarists of all time, who has collaborated with talented artists such as Dido, Tina Turner or Joe Cocker!

It is a powerful and generous show, on Afro-Cuban rhythms, that electric guitar legend Carlos Santana has proposed. The American guitarist has lost nothing of his energy and generosity, offering a pure moment of rock with Latin and blues influences.

Revealed at the mythical festival almost fifty years ago, the guitarist Carlos Santana has denied nothing of his hippie values and assumes the most confusing facets of his mysticism!