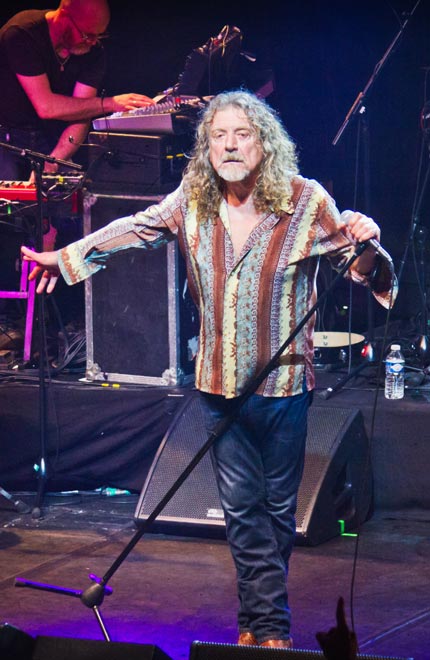 Is he the pope or the god of rock? To tell the truth, it doesn't really matter which adjective is used, because Robert Plant, Led Zeppelin's mastermind, is definitely the man who put into orbit a rock that shines forever in the tumultuous sky of modern music.

With his long, curly hair, Led Zeppelin's crew chief, an alchemist of the strangely beautiful, has always aroused mystical admiration. If he has definitively turned the page on the seventies, that time when his friend Jimmy was in charge of the backstage under his high-pitched voice, the virtuoso of Kidderminster still intends to write beautiful chapters in the thick book of a life spent trampling on unknown sonic lands.

Ease is its antipode. For he prefers to explore sounds from elsewhere, those that romanticize a world in motion and that are grafted, with surgical precision, to the timelessness of rock. He likes to brave the forbidden and disconcert his admirers, going so far as to cross influences that only he can master to perfection. He marries the blues, flirts with hard rock and even dares to make infidelities with the psychedelic sounds that have forged his glory, sometimes preferring the youthful breath of trip-hop or the mixed colours of Ireland and the East. It's a nice melting pot. Impossible to stay put, Robert Plant leaps like a tiger as soon as inspiration leads him to explore new lands.

While the Yardbirds are going through a difficult passage, Jimmy Page meets Robert Plant. At that time, they didn't know it yet, but they wrote the first lines of a project that would change the world of music: Led Zeppelin. From the following year, the band takes the ears of the world by storm, sometimes leaving the critics static, not always knowing on which foot to dance in front of this modern-day UFO.

The drama that almost cost him his life

Led Zeppelin is on the roof of the world. Each album gives birth to euphoric crowds and titanic tours. But when the band decides to found its own record company, Robert Plant is victim of a terrible car accident. The death of his son, a few months later, hit him in the heart. For him, the adventure would end there, despite a quick return in 1979.

With his friend Jimmy Pages

Friendship resists everything, and it is not the end of Led Zeppelin, in 1980, following the death of John Bonham, that will hinder the complicity between Robert Plant and Jimmy Pages. On the contrary. That year, they even deigned to get together to record the No quarter record and start a world tour.

After the success of his album Mighty ReArranger, where he ventures into African lands with sounds borrowed from electronic music, Robert Plant is back with an album of covers that will make the Grammy Awards tremble: Raising Sand. That year, and it's quite rare, the artist won four awards, including Album of the Year. Who else can boast of such a feat, almost thirty years after his first scenes?

With the Sensational Space Shifters

Now, on stage, Robert Plant has an army of ten musicians at his side. Among them: Justin Adams and Cast. Together, they recorded a wonderful album in 2017, entitled Carry Fire, which received standing ovations from the public and English critics alike. With Robert Plant, it would almost become a habit.

Perfect! This Robert Plant concert was, for me, quite simply, magical. I was very moved. And in terms of music, it was not limited to Led Zeppelin. Oh no: he even taps into pre-war blues, gospel and, of course, he enjoys playing a lot of pieces from his recent discography.

Guillaume, after the concert in Istres

Robert Plant has had many lives. He put Led Zeppelin into orbit, alongside Jimmy Pages, then, on separation, he cultivated his personal universe, surprising his world with each album. He's unpredictable, and that's surely the mark of the greats. So seeing him on stage is like being in front of the Mona Lisa: no matter how much you see him, you're always bluffed and the colours always seem different. His life is a work of art: what a great artist!

Robert Plant navigates between mischief and power. Through the warmth and power he puts into each of his interpretations, one can only feel an authentic passion and sincerity. Each title of his repertoire is presented in this way, between jest and self-mockery.

Although his voice no longer titillates the orgasmic highs, it has gained a warmer sweetness that fits perfectly with the contemplative wandering of a melody. His teenage passion for the blues remains the fuel for all his travels, but the elegance, fervour and modernity with which he teleports the Mississippi delta from West Africa to the East.