The show must go on
Ecouter 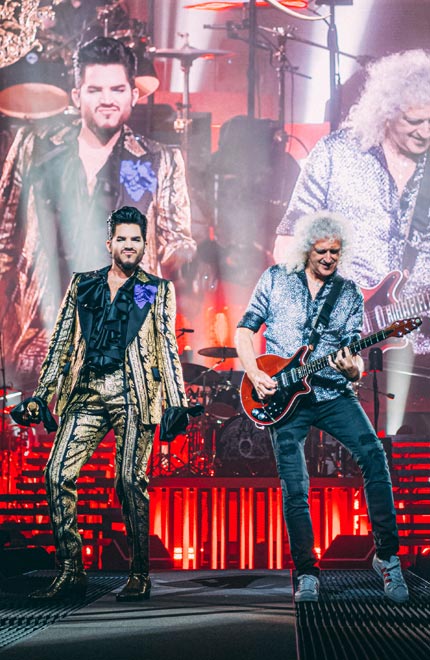 Because The Show Must Go On, Queen continues to inflame the stage with her iconic and devastating hymns. Supported by a sparkling Adam Lambert, the English kings crown an extraordinary career, in the wake of the eternal Freddie Mercury.

He is no longer there, Freddie Mercury, but his shadow, his sensitivity and his moustache hover over the stage. Surely he is proud to see Adam Lambert and his comrades of the time paying such a vibrant and energetic tribute to him. For the young Indiana singer is at the helm, resisting the dazzling performances of Brian May and Roger Taylor. In the land of rock, it's an open secret: Queen remains king, the crown firmly screwed on her head. Her youth seems eternal, her supremacy stainless.

Certainly, the master thinker, carried away by illness on a sad autumn day, is irreplaceable. Yet the kingdom remains standing, with punch, extravagance and malice. The stage performance detonates. Yes, facing the pit, these stage beasts have fangs. Time stands still. Yesterday is today, and the melodies of Queen, with a power to make stadiums tremble, resound in a loop. Freddie Mercury has left a void, but not the void. Because his greatest admirer, Adam Lambert, takes up the torch and embodies his work to perfection, with charisma and pride. The magic works!

To the glory of the past is grafted the ecstasy of the present. To the memories of yesteryear, the new generation invites itself. It's obvious: Queen has invented an immutable form of modernity. At the confluence of progressive rock and opera, London's heroes seem alien to wrinkles and impervious to weariness. Only the fervour of the crowd reaches them, as if to make them stronger, taller, crazier. Their flame does not fear the ashes. Even now, the world is Queen's!

Should we believe in destiny? In any case, when these four sons of a good family meet, it is the beginning of a story that will change the world of music. Queen was born. The band's first album, with the eponymous name, is critically acclaimed. Soon, the public, dazzled by the quartet's performances, falls under its own spell. Bim, the following year, the release of the title Bohemian Rhapsody marks the beginning of the triumph!

Their career is at its peak. But no one really expects Queen and David Bowie to work together. When the stars come together, the stars shine. Under Pressure takes pole position in the English charts and will become one of the highlights of the band's discography. We know what happens next: never, oh never, will the success fade away.

The news falls, so do the tears. The world is in turmoil, because Freddy Mercury has just breathed his last. Suffering from AIDS, he dies on his hospital bed, leaving rock lovers speechless. It's a world that comes to a halt. The King of Queen is no more. A few months later, millions of people will follow the concert at Wembley, where dozens of top artists, including David Bowie, Metallica and Elton John, will pay tribute to him.

Adam Lambert, because of his youth, his immense talent and his charisma takes the group with him. We no longer pay homage to Queen's repertoire, we see a Queen concert! The experience is such as it must have been when the group was at the height of its glory.

Frédéric, after the concert in Paris

Queen is a legend. To have the chance today, thanks to the incredible talent of Adam Lambert, to see this group on stage again and to relive the emotions of yesterday, is something you can't miss. Brian May and Roger Taylor are still as energetic, the show is still as powerful as ever. It's an honour to allow Queen to continue on stage!

Adam Lambert is unanimous. His vocal fluency allows him to perform the entire repertoire of the group without a hitch. His personality also plays, to the delight of the fans.

Rock, Queen knows. And the legendary band proved it once again loudly, to the sound of Brian May's guitar and Roger Taylor's drums. But most of the show was Adam Lambert's show. Red hair, dressed in leather and wearing big square black glasses, he started his performance with disconcerting ease.