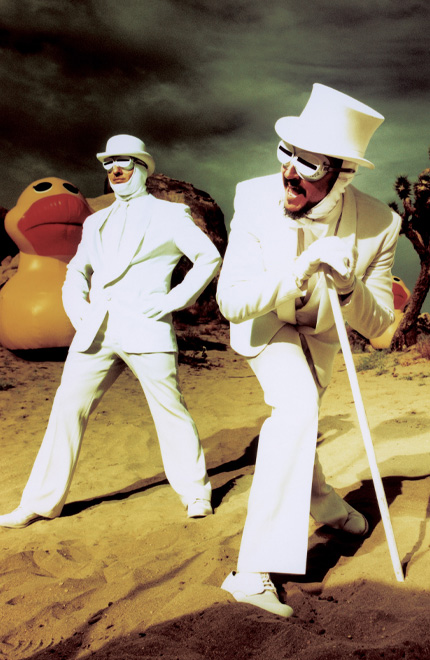 Crazy trio formed in 1984 in San Francisco, Primus makes figure of group with share in a musical landscape too often formatted. A single sound and an offbeat approach to be found soon on stage!

If the particular style of Primus can disorientate at first sight, one notices that the group navigates easily between heavy metal, psychedelic rock and funk, accompanied by rather funny texts, pastiches of the American society. At its head, Les Claypool, crazy singer and genius bass player, accompanied by Larry Lalonde on guitar and Tim Alexander, then Brain on drums.

The trio produced great songs in the 90's, which stand out by going in all directions, merging at will while sounding very groovy. In short, a great eccentricity! The success was not long in coming: participation in the Loolapalooza festival in 1993 and Woodstock in 1994, obtaining a Grammy Award in 1994 for the song Wynona's Big Brown Beaver, as well as several albums certified gold records.

The band always knows how to surprise in areas where they are not expected, like the psychedelic reworking of the soundtrack of the 1971 movie "Willy Wonka & the Chocolate Factory".

Now the band is announcing a Rush tribute tour, covering the seminal album A Farewell to Kings in its entirety. We know that Rush is one of the great influences of the band and no doubt that the latter will deliver an energetic performance as usual! See you at the Olympia on September 23, 2022.