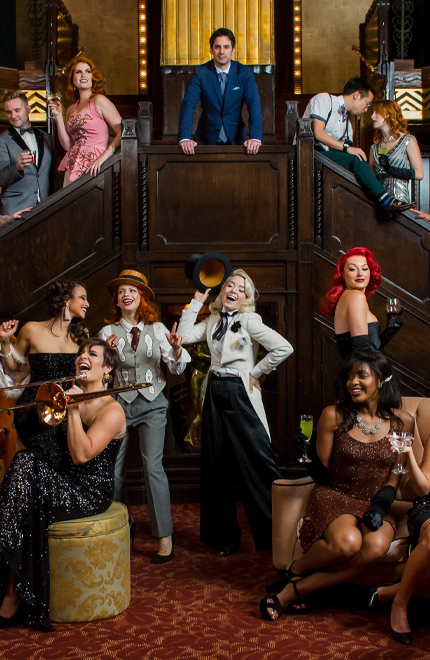 Take the greatest contemporary pop hits, throw them into a time machine and shake it up. You'll get the artistic excellence of Postmodern Jukebox and its sounds straight out of the early 20th century. Music that feels good and gives you a smile!

It's as if Bob Dylan decided to cover Maroon 5, Aretha Franklin sang Radiohead's Creep or Marilyn Monroe took the sultry place of Britney Spears. Because Postmodern Jukebox likes to do old with new. With them, it swings, it's jazzy and whole sections of music are brought up to date. Who still knows doo-wap, ragtime or motown? If we've forgotten these names, they haven't, and they let us know in song and with a communicative energy and good humor. If you close your eyes, you'd almost feel like you were going to the ball with Frank Sinatra!

Ironically, it is on YouTube that the group led by pianist Scott Bradlee took off. And in fact, there is no band at all. For Postmodern Jukebox is as multifaceted as its covers. While its founder remains, more than 70 artists have passed through its ranks, for a song or for a season. And it is also its strength to integrate musicians and singers coming from multiple origins, young talents often passed by televised contests. An additional visibility for those who have already exploded the billion videos seen in the world.

From the screen to the stage, there was only one step that the group finally realized. And fortunately! Because in concert, it is a festival straight out of the movies of the 20s, the color in more. It swings, it sings, it dances and it tap dances. The evenings go by, they don't look alike and they take us all the way back to the roaring twenties.