The new revelation of folk
Ecouter 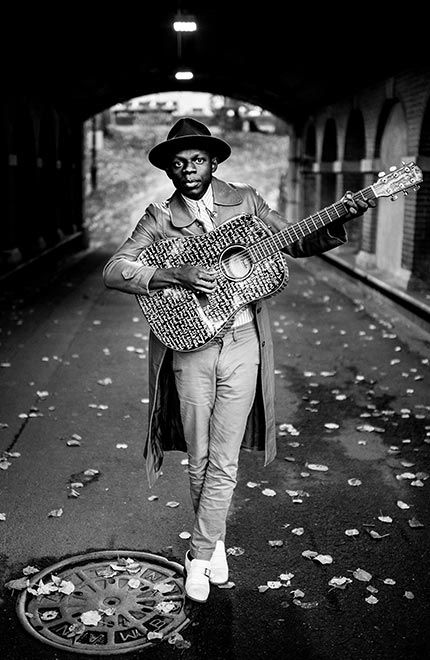 His face is not yet known to all. Yet, with his eyes illuminated with hope, this young Kenyan, who emigrated to the United States, carries a folklore full of emotions. His voice takes us to our guts. In short, he has everything to appear, in a more or less near future, in the court of the greatest, where the master is Bob Dylan.

He is one of the rising stars of folk music. He's got Bob and Neil Young running through his veins, a bit of Curtis Harding and Michael Kiwanuka in his voice and something a la BB.King jeune: that's probably for his inspired look, black hat screwed on his head. So, no need to have been in the middle of his fine discography to understand that we're dealing with an ace of aces. First of all, we hear this vocal timbre that caresses our eardrums, as if to take us by the hand. J.S. Ondara thus tells us his epic journey from Nairobi to Minneapolis, where he landed one fine winter day in the freezing cold.

Here, the texts are elegantly tied up, as if open to free interpretation, and the melodies are finely spiced up. This is absolute class. Yes, this angel-faced kid, who almost looks like he's apologizing for being here, at least when you see him from afar, dazzles with his precocious talent. Because when he goes on stage, it's a great man who steps forward. He embodies the American dream. But J.S. Ondara is not satisfied with that.

With his guitar, he tells beautiful stories, brings out his wildest utopias and grows up, again and again, to break the glass ceiling. The bets are already open: J.S. Ondara will put folk back on the rails of modernity. In any case, its singularity should bewitch us for a long time to come. But, really, where does this genius come from that makes him different from all the others? We don't know. Perhaps he has the answer: "I'm Kenyan, so there must be some unconscious influences from the music there".

On this cold day, he arrived in Minneapolis, with a second-hand guitar to play a few tunes that warm the body. He doesn't know English very well, so he learns on the job. He listens to Radiohead and Oasis over and over again. Then, after a few months of trouble, a radio station plays one of his first compositions over and over again. He miraculously manages to get noticed by the Verve label, with whom he starts working on his first record.

His talent dazzles the insiders

Admittedly, the first record did not invade the airwaves of America. But Tales of America was praised by all the specialist press. It is unanimous: its folk has something inherited from the greatest, including the legend Bob Dylan, the idol of J.S. Ondara. The Kenyan is thus starting a magnificent tour in France and elsewhere on a good footing.

On stage, J.S. Ondara fills our reservoir of emotions. Frankly, I didn't know him before I came, but he's quite a slap in the face. I am amazed to see how he gives the folk a breath of fresh air, with humility and elegance. He is an enormous talent that I hope will be able to confirm in the years to come.

Solveig, after the concert in Paris

It is one of the greatest hopes of folk music. As soon as we discovered him, while he was still unknown to the battalion, we fell in love with him. He convinced us of one thing: we absolutely had to go with him, because he deserves a career worthy of his talent, his warm voice and his sweet melodies. He can certainly become a legend !

Produced by Mike Viola, his debut album is a powerful testimony to the journey of an immigrant facing periods of social and political turmoil in his adopted country, and takes an ironic look at this popular notion of the American dream.