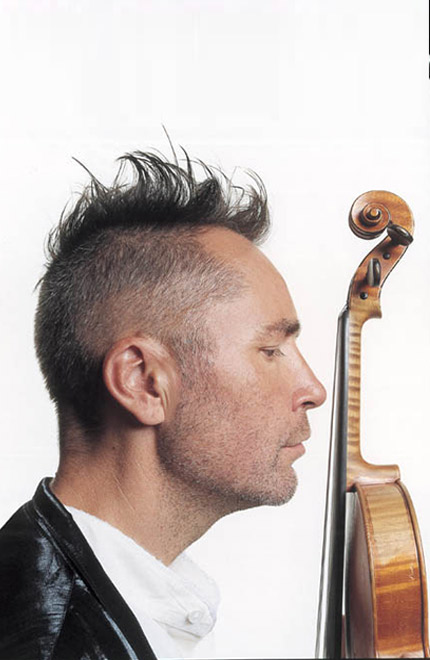 With his hair in battle and his Iroquois hair, he swapped the three-piece suit for a T-shirt with a slogan, oversized trousers, a shredded jacket and sneakers. An old punk? No, a legendary violinist, on stage alongside the best musicians and drawing tears so easily from an audience on the verge of hypnosis.

This man, we don't introduce him anymore. He is the enfant terrible of classical music, the gentle madness that took hold of a violin, the only bad boy capable of giving the answer to the best symphony orchestras. This man is the brilliant and insolent Nigel Kennedy, who has been dragging his Stradivarius around the world for over 40 years and whose talent, energy and impertinence have still not aged a day.

For he has given himself a mission: to bring classical music to the general public. To bring Bach, Vivaldi and other artists from ancient times into our houses and flats. And it doesn't matter if that means cutting down, or sometimes shattering, certain conventions in the process. Staying still and upright as a post to deliver your solo? Not for him! Coming in close shaved? To others! What interests him is the music and only the music, not the style. Deviations that the classical world sometimes finds hard to forgive him for. But which he very quickly forgets as soon as he makes his first notes resound.

Because with bow in hand, he makes his strings vibrate like nobody else. "His technique is astonishing. When you see him play, you can't deny him anything," said Lizzie Ball, first violin of the Orchestra of Life who accompanied his tours. And when you play with this prodigy whose style is as free as his rhythm is bold, you'd better follow. Jazz, rock, classical, borders or the established order, it's not for him! Improvisation, on the other hand, is something he knows at his fingertips. And let's be clear, it's not that he doesn't respect anything, Nigel, it's simply that he's free!

Nigel, child of the classic

Seeing his improbable looks come and go throughout his career, it's hard to say that Nigel Kennedy was ever a wise child. However, his training is classic as he first studied at the school of Yehudi Menuhin before joining the prestigious Julliard School in New York, where superstar Dorothy Delay took him under her wing.

Helped by his manager John Stanley, the young artist worked on his image. With his beard and his hair in battle, he becomes an offbeat dandy. But when he released his version of Vivaldi's Four Seasons, his leather jacket was almost as striking as his virtuosity. The record explodes the charts all over the world. Today, more than four million copies have been sold. His outspokenness and inimitable style of dress and music will do the rest. The violinist has conquered the planet.

Shocking return of a free man

In 1992, after a neck operation, the musician took a five-year break from music, during which he explored rock, Celtic music and jazz. The return of this classical rock star in 1997 made the front page of British newspapers. And he now has only one watchword: to do exactly what he wants when he wants! Two years later, and in line with what he had announced, he released The Kennedy Experience, in homage to guitarist Jimi Hendrix.

An orchestra at its measure

Nigel Kennedy takes to the sea. Classical and symphony orchestras are no longer enough for him, so he creates his own to accompany him in concert, notably on his 2010 Bach-Vivaldi tour. For the artist refuses nothing. Neither improvisation in the middle of the Four Seasons, nor a few harmonica notes to enter the stage. And for this he needed "total freedom. To do concerts as I see fit with young people, who are on the same energy and will not hesitate to follow me everywhere". And of course it works!

The violinist's love for Johann Sebastian Bach was well known. But it was in taking up Gershwin again that he signed his last album, taking up the two famous composers on the tour that followed. If they were to meet, the artist explains, amusingly, that they would probably do "a harmonic wrestling match... in the mud! ». No mud for Kennedy, but still a band formed to follow his improvised flights of fancy in the midst of his highly classical compositions!

I spent unforgettable hours with this immense artist. He is indeed unorthodox, joking with his musicians and with the audience in between pieces. But I was dazzled by his incandescent playing and really amazed by his level of availability, sharing and commitment. Thank you!

Amandine after a concert in Paris

He is a rock star in the world of classical music. A prodigy who has managed to break free from the codes to chart his own course. A simple guy who brings a demanding genre to the masses. When we see him laughing at his zany improvisations or sharing a joke with his audience, we can't help but be completely won over. Because if Nigel Kennedy is a enfant terrible of the violin, he is certainly only a child of overly strict parents!

Nigel Kennedy has a mission: to reconcile "great music" with the people of music lovers who ignore each other. To return the instrument to its origins of popular festivals, to the times of the travelling minorities and the diasporas. Without, however, denying the high-flying virtuosity it possesses.

Nigel Kennedy gesticulates on stage, greets the audience with his fist raised like a rapper. Yet he is one of the greatest classical violinists of his generation. The audience in Rosenheim, Germany, proved him right. More than ten minutes of standing ovation greeted three hours of virtuosity and energy that is almost miraculous.