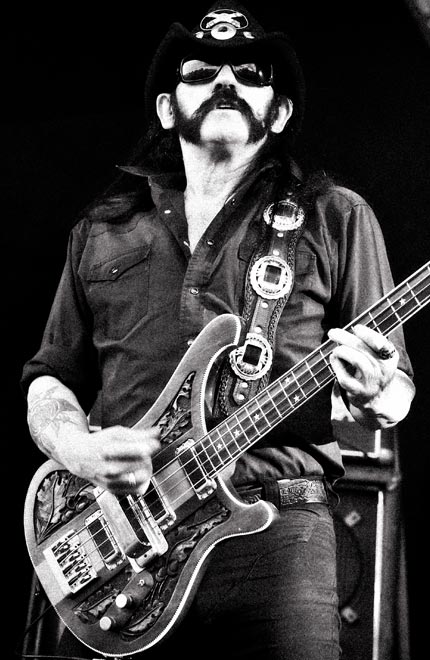 In the 1970s Motörhead made an impressive entry into the heavy metal scene. Led by its charismatic leader, the thunderous Lemmy Kilmister, the band wants to play fast, wants to play loud, laying the foundations for speed and high-voltage trash metal here and there. Because Motörhead is the spirit of rock, metal and punk in one band. These are concerts that make your eardrums explode and that will remain in the ears of whole generations.

With its mythical skull encircled by horns as a banner, the band's success is certainly due to its furious madness and rage. If the albums are always licked, it is on stage that the band takes its full extent. Eyes up in the sky, his microphone hanging over him, Lemmy's sharp voice inflames the crowds to talk about good and evil, drugs, sex or life on the road. Originally accompanied by Phil Taylor, a hammering demon on drums, and Eddie Clarke, smashing his guitar strings to pieces, they will make their mark in France at the Bataclan, turning the room upside down and raising the decibels like a war machine.

"If it's too loud, you're too old" was the rehearsal of the band that had stabilised in 1992 around guitarist Phil Campbell and drummer Mikkey Dee. Motörhead's great moments were written in their wild and wild youth. But the band, now a legend, continues to fill the halls, led by a Lemmy whose talent was only equalled by his wild antics. Only the reaper will stop them for good. In 2015, while a tour was once again in the news, she stopped the group's singer dead in his tracks, who would disappear along with his figurehead.

A mythical group based on a dismissal

That year, Lemmy Kilmister was arrested at the Canadian border for possession of amphetamines. He was subsequently fired from his band, Hawkwind. He then decided to take charge of the band so he would never be left by the side of the road again. He founded Motörhead, the name of the last track recorded with his previous band, and very quickly surrounded himself with two emblematic musicians: Phil Taylor and Eddie Clarke.

Lemmy is caught up by his excesses

After years devoted to alcohol and drugs of all kinds (but never heroin, as he likes to point out), Lemmy is finally caught up by his excesses. In September 2015, as he continues to hammer away at his music that has become classical, he has to interrupt his concert in Austin. Two months later, he died surrounded by his loved ones, marking the end of a band that made metal history.

Evan after a concert at the Zénith in Paris

Motörhead is a band that has made the walls tremble as much as it has made hearts vibrate. In a frantic rhythm, Lemmy Kilmister swung his song to the heavens without any further ado. It was raw, it was dirty, it was pure. It was everything we loved.

Finally, he will be there, on Saturday 2nd July 2011, at the Eurockéennes de Belfort, after a few missed appointments: Lemmy Kilmister, Motörhead singer-bassist, archangel of rock, king of heavy metal, encyclopaedia of all possible excesses... Motörhead at the Eurocks, it unleashes passions.

He was considered one of the pioneers of heavy metal, although he always assured that Motörhead was a rock'n roll band. He said he came from a time long before metal. He liked "basic music: loud, fast and noisy (...) I play rock'n'roll and I believe that rock'n'roll is sacred," he added.