Soul has its fighter
Ecouter 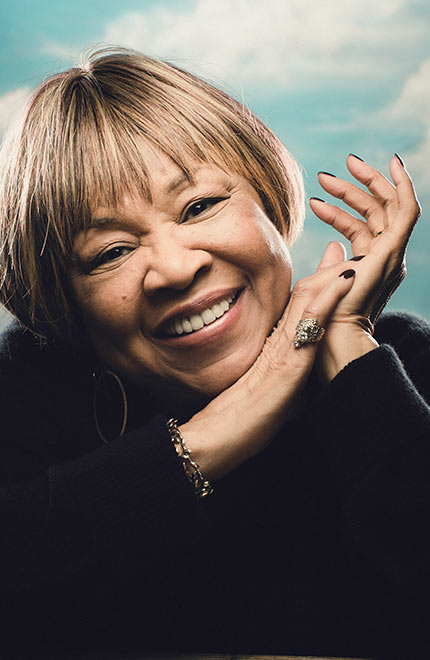 There is so much to say about Mavis Staples. With her five feet, she's a little piece of woman with an impressive wingspan and a golden voice. It's an extraordinary trajectory, a lifelong commitment to civil rights and a musical career that has spanned more than 60 years alongside some of the world's greatest artists without ever running out of steam.

With a deep, husky, and full of life voice, Mavis Staples awakens buried emotions and energizes like no one else. And when she sings her soul or gospel music, all in vibes, it seems as if God himself stops for a moment to listen to her. The one who started with her father and sisters has come a long way. By emancipating herself from her family, she has collaborated with the greatest producers and artists of this world. Prince, Curtis Mayfield, Ry Cooder and even Bob Dylan, whose marriage proposal she had the luxury of refusing, not impressed by the singer's fame.

Because yes, since her beginnings and even more so as she gets older, the singer knows what she wants. In the pure soul tradition, singing Love and hope, again and again, is her mission. It must be said that she learned from the best: Martin Luther King was her friend and made her grow up on the road to defending civil rights in the United States. It was the fight of a lifetime for the singer who opened the Doctor's meetings with her repertoire of freedom songs, to give support to the black population, then struggling against racial segregation.

And while the latter fortunately fell, the battle did not stop for the tireless activist. After her immense success in the 60s and 70s, she found a second wind in the 2000s, recently delivering one of her best albums, full of protest songs about the fate of African-Americans in Trump's America.

Meeting with the King

In the early 1960s, the entire Staples family attended the service of Martin Luther King. Already involved in civil rights advocacy, the Staples Singers and the pastor fell in love at first sight. From then on, the gospel group that already draws on soul and funk will accompany him, opening its meetings with the freedoms songs they have the secret of, including the well-known Respect Yourself. A commitment that will forge Mavis Staples and that she will keep throughout her career.

A year after the death of the man who had become her friend, Mavis Staples, heartbroken, decides to go solo. In 1970, her shocking album Only for the Lonely and its title track, Live without You, exorcised her trauma. She was already the lead singer of the band formed with her father, guitarist Pops, and her siblings, and was an immediate success.

A success that awaits the value of the years

The singer continues to make albums as she gets older, reaping more or less artistic recognition depending on the times she goes through. But the 2000s will reveal her again through the sumptuous albums We Never Turn Back (2007), which reinvents the gospel classics, or the critically acclaimed One True Vine (2013). Far from the disco or rock experiments, she then returns to her origins and the protest songs that are dear to her.

Ben Harper, as a matter of course

In 2019, two years after the nugget If All I Was Was Black, Ben Harper, with whom Mavis Staples had already collaborated in 2016, produced his latest album We Get By. It brings a militant and hopeful tone that suits the singer perfectly in an America that finds itself once again torn apart by a president that the artist does not really carry in her heart. At over 80 years of age, she has certainly not finished her commitment!

Great concert! A little piece of woman who really sends a lot of weight, and even more so when you know her history and her commitments. The rhythm is millimetric and Mavis Staples, despite her age, has lost nothing of her vocal power and energy. I'm really happy to have attended this great moment of soul, far too rare in France!

Anna, after a concert at La Cigale

Mavis Staples is a monument to American soul as well as a civil rights figurehead, whom she defended alongside Martin Luther King. We are especially honored to accompany this legend with her warm voice. With more than 60 years of career behind her, she is still brimming with energy and joy when she takes the stage. A great lady who does good!

Marthin Luther King was his guide. With her golden voice, she has for decades sung the misfortune of black Americans with unbroken rage and energy. The great lady of soul delivers a sublime album, written and produced by Ben Harper.

Believing in the impossible, never taking herself too seriously or believing that the best is yet to come, after all she has done it all her life. Singer, "messenger" of hope in defiance of the cruellest realities, this has always been the mission of this exceptional vocalist, "the incarnation of soul", in the words of Prince.