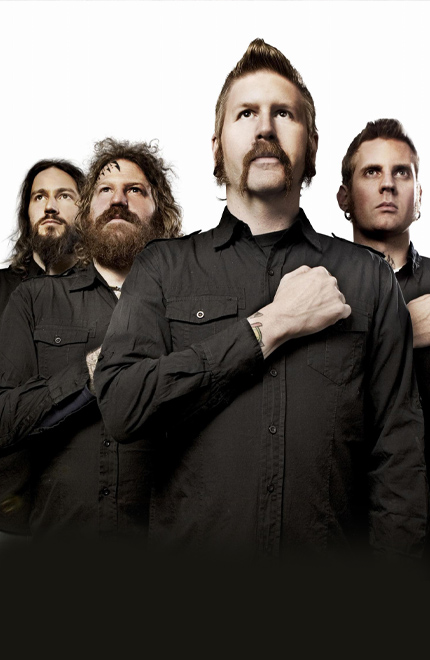 With over 20 years of career, Mastodon is known for its unique blend of rock and metal with sludge, progressive and heavy sounds, with touches of psychedelia. The riffs rain down, the ground shakes and the audience asks for more! After 7 studio albums, the band from Atlanta is not done fighting.

The band was formed in 1999 by drummer Brann Dailor and guitarist Bill Kelliher, who had played in Lethargy and Today is the Day. The two friends moved to Atlanta, where they met bassist/vocalist Troy Sanders and Brett Hinds at a metal concert. The band was formed and a first demo was released in 2000, followed by two EPs in 2001. The band quickly attracted attention and began to make a name for themselves on the progressive metal scene. Their first album, Leviathan, was released in 2004: it was a concept album inspired by Herman Melville's novel, "Moby Dick". It was very well received by the critics and was named album of the year by Kerrang! and Terrorizer.

The band continued to make a name for themselves on the metal scene with their next efforts, Call of The Mastodon and Blood Mountain, both of which received rave reviews from critics and a large audience. The audience even extends beyond metal fans, thanks in part to the participation of Josh Homme (Queens of The Stone Age). The band promotes its album in Europe, notably by touring as the opening act for Tool in 2006 and then Slayer in Australia and New Zealand. Brendan O'Brien (Bruce Springsteen, Pearl Jam...) is in charge of the next album, Crack the Skye, and the band is noticed as the opening act for Metallica in 2009 on their World Magnetic Tour. Preferring melodic lines to growls, the band develops progressive atmospheres, very influenced by bands like Yes.

The albums released during the 2010s will see the band explore new sounds, sometimes more accessible, proving that the band never wants to do the same thing again and surprise its audience. The Hunter and Once More 'Round the Sun are a vibrant testament to this.  The band has been touring the world successfully, with Parisian appearances at the Zenith, the Elysée Montmartre or the Casino de Paris. In 2017, the band released Emperor of Sand, followed by a tour in the United States with the bands Eagles of Death Metal and Russian Circles. A successor is already planned and Bill Kelliher has already announced the color: "It is the most complete and most massive of our discography.