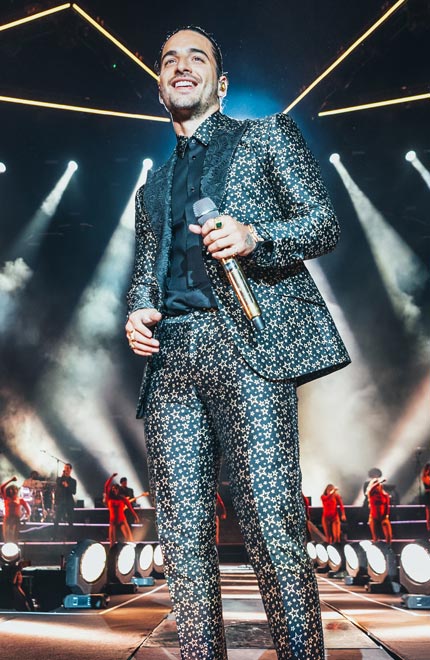 He dreamed of being a soccer player, he became one of the most famous Latino singers in the world. Devastating charm, wild rhythms, collaborations with the greatest and several billion views on YouTube, Maluma has all the ingredients to set fire to the dancefloor and hearts.

His music is a mix of the influences that cradled his childhood on the streets of Medellin. Raggaeton of course, but also hip-hop, rap, trap or the most classic mambo and merengue. Sprinkle a dose of well dosed pop and you get an almost indefinable style, pure Maluma, which undeniably belongs to urban Latin music. The kind whose rhythm instantly sticks to your skin and whose warmth draws you irresistibly to the track.

But behind his angel face, his curly appearance and his songs that tell the story of love, from that of a lifetime to that of an evening, Maluma is not just a smooth artist, who would make youth dance for a summer. No, he has things to say and is downright assertive in some of his songs. For example, El Perdedor highlights the racism and injustices suffered by Latin Americans in the US and he doesn't hesitate for a second to take a stand for the rights of LGBT people around the world.

Because he is like that, Maluma, his music is as fiery as his heart is golden and he does not forget his values. And if he rubs shoulders with the greatest, showing himself off to the envy of Shakira, Madonna or Ricky Martin, he knows where he comes from. His strength is his family, his roots. And it is so as not to deny them that he refuses for the moment to sing in a language other than his own. And that's good, his success in Spanish is worldwide!

Solo on the airwaves

At the age of 17, the young Maluma decided to go into music on his own. And, a rare event, he managed to get his single Farandulera on the radio. The success is instantaneous, thousands of Colombians dance on this hit and Sony Music decides at the same time to sign the singer to record his first album.

The explosion is planetary

However, it will take a few years for Maluma to reach the heights we know today. If he gradually set fire to dancefloors all over South America, it was his second album Pretty boy, Dirty Boy that really propelled him to the top of the world charts. He will then be spotted by Queen Shakira with whom he will record Chantaje, making the whole planet dance during the summer of 2016.

Official member of the "Medellin Band".

Never stingy with collaboration, the artist associates with another "king of Colombian reggaeton", J. Balvin. Together, they released the hit Que Pena, which was a resounding success. However, the singer did not stop there and collaborated the same year with superstar Madonna on her album Madame X. In the same vein, he made an eye out for his French fans by covering the song DjaDja by Aya Nakamura, after having collaborated with Maitre Gims the previous year. No doubt, Maluma now reigns supreme on the musical planet.

What a pleasure to see Maluma in concert tonight! As a lover of Latin sounds, I was looking forward to her passage in Paris and I was not disappointed. The singer, the musicians, the dancers, even the decor was perfect. We sang in Spanish, we danced, we let off steam and it felt great!

Eva, after a concert in Paris

There are too few artists from South America who break into Europe, bringing with them the raggaeton sounds of the Caribbean. And Maluma, in addition to having managed to mix these influences with modern pop, is one of them. The result: songs that instantly make you want to dance and concerts that set you on fire!

Born in Medellín, Colombia, Maluma has conquered the entire planet singing in Spanish and exporting his hits, straight from his Latin roots, to become a popular international pop star in the fashion world, with 22 million subscribers on Spotify and 50 million on Instagram.

Considered one of today's most popular Spanish-speaking artists in the Latin pop category, Maluma has recently made a comeback with the release of his fourth studio album, '11:11', in May 2019.