Always up for Southern rock
Ecouter 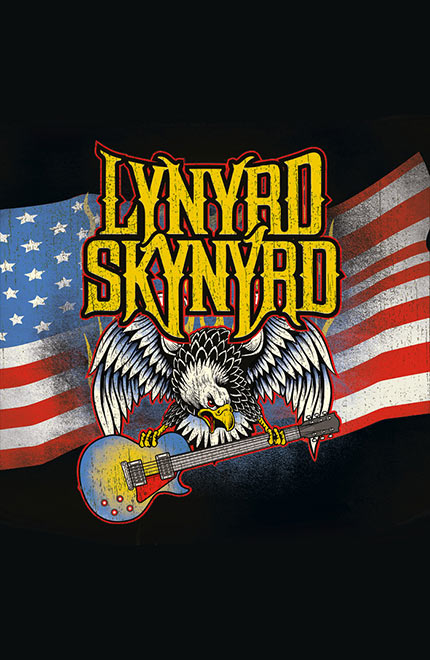 Decimated, but alive. Lynyrd Skynyrd never resigns himself and knocks fate out to continue to make Sweet Home Alabama reason forcefully, everywhere and forever. Today led by Gary Rossington, the group continues its long epic through the streets of America.

In spite of the curse, Lynyrd Skynyrd still breathes with a strong and unifying breath. He rises from all the sobs, heals yesterday's wounds, even the deepest ones, and puts a smile on the faces of Southern rock lovers. In this way, he celebrates life and travels across countries like never before. For Gary Rossington, the only survivor of an unfortunate collective adventure, getting on stage is a tribute to the lost souls, to his buddies of yesteryear, the driving force behind a band decimated by the Gillsburg tragedy.

Certainly, Lynyrd Skynyrd's carefree spirit died one day in the fall of 1977 in a terrible plane crash in the Mississippi forests, leaving several of its members to fly to the afterlife. But who has never believed in resurrection? So, after the mourning, the group resumed its march, a few years later, always in the conquest of the same aesthetics. The dry riffs and the monstrous solos carry a voice that is now hoarse and grainy. The rhythm, always impeccable, awakens like a coffee mug. It is obvious: here is written, always in capital letters, a crazy adventure on the roads of America, where the asphalt melts fearlessly under the sun of a hot country and an exacerbated blues.

Their image of the gentle thugs of the time has faded. Yes, since the drama, Lynyrd Skynyrd has become something else, without denying its roots. But, sadly, death is never far away, despite the cheerful faces of its members. Allen Collins, Leon Wilkeson, Hughie Thomasson, Billy Powell: the last survivors of the band have also spread their wings to reach the heavens, leaving Gary Rossington alone, as the guardian of an insoluble legacy.

Today, it is this story that the band comes to tell. Every concert is a celebration. With freshness and audacity, Lynyrd Skynyrd comes to sublimate a discography of a thousand colors, which has become a bible for all music lovers. And we might as well say it right away: Sweet Home Alabama still sounds great!

The wink of an eye for bad students

Created in 1964, the group's names range from My Backyard to One Percent. It is only in 1970 that the band, already well experienced, decides, on a whim, to bear its definitive name: Lynyrd Skynyrd. A mocking wink to their sports teacher, who sends them away from class at the slightest opportunity because of their long and rebellious hair.

The attraction of a whole country

Lynyrd Skynyrd loves provocation. Breaking codes is part of the journey. With a first album, which few labels wanted to produce, the band makes its mark. They become the new heroes of American rock, in the footsteps of the Rolling Stones. The following year, the release of Sweet Home Alabama, a clever little tackle to their friend Neil Young, marks the climax of their career.

Ronnie Van Zant had a hunch: he won't make it past thirty. Unfortunately, he was right. The singer of the band died in a plane crash, as did most of the members of the band. Gary Rossington had not taken part in the trip: "I don't feel like it," he had said before taking off, preferring another flight. After the crash, Lynyrd Skynyrd is at a standstill. Who can imagine a return in these conditions?

After mourning, the resurrection

It was unexpected, almost unhoped for. Yet, the survivors of Lynyrd Skynyrd want to hit the road again to pursue a book that has been closed too quickly and to pay tribute to their friends of yesteryear. They offer seven unreleased titles. The comeback is successful, with a first album in the baggage, which will be released in 1991.

A last one for the road

Time passes, and Gary Rossington announces to the world his intention to organize the ultimate Lynyrd Skynyrd tour. It is not the final stop of the group, but a strong slowdown is in the offing. To mark the occasion, the band begins a long and beautiful journey around the world, to meet its longtime fans.

This is the first time I have had the opportunity to see them. It was a really nice moment! The band plays hard and aligns the standards. Even if there is only one founding member left, because of the dramas that we know, Lynyrd Skynyrd maintains a real artistic coherence and pays a real tribute to the disappeared. It's hard not to think about it when you see them! In any case, it was a great concert.

Grégory, after the concert at the Helfest

Lynyrd Skynyrd has always managed to bounce back, despite tragedies. The Florida band, originally from Jacksonville, has become the icon of southern rock, and Gary Rossington has managed to keep the spirit of the band alive over the past few decades. Lynyrd Skynyrd has such a strong history, to see them on stage again is a huge honor. You can't miss it!

A successful farewell for Lynyrd Skynyrd. The southern rock band draws a concrete setlist. Three guitars and two backup singers, there's a lot of people on stage, but no one's pulling the cover. Magic, even the punks in the audience have tears in their eyes.