Provocative at the forefront
Ecouter 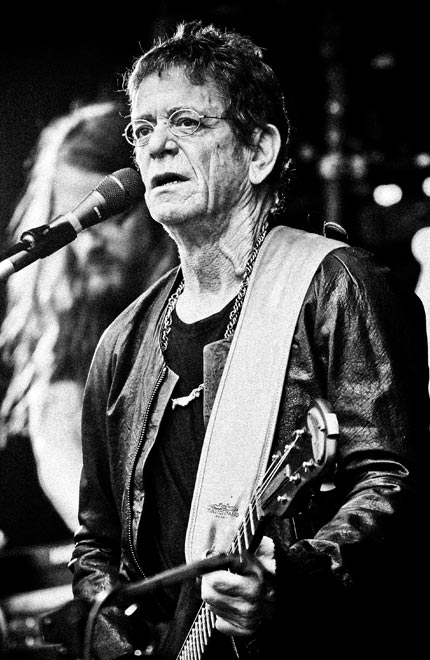 The monstrous Lou Reed has managed to reinvent rock music with lyrics as dark as the shallows of New York and provocative attitudes bordering on insubordination. From Andy Warhol to David Bowie, he caught the eye of the greatest and if his talent was not always immediately recognized, he is today one of the figures who still write the history of rock.

Because Lou Reed is a genius at the forefront and it doesn't matter if his albums don't meet with popular success as soon as they are released. His lyrics redefine the essence of rock music and elevate it to the level of contemporary art where some still see it as a genre that is barely good for entertaining crowds. Dirt poetry, writing glued to his guts, he relentlessly explores the darkest facets of humanity, those he touches with his finger and into which he sometimes sinks completely. Addictions, despair, marginality, sexuality, no taboo is powerful enough to prevent him from depicting the obscure existence of those left out of this world.

Provocative in his texts, he also erects insubordination as a way of life. Some of his concerts turn into full-blown riots when he makes it look like he's shooting up in the middle of the stage. And journalists from all sides who come to question the phenomenon can tremble. Uncompromising with the press, it is not uncommon for them to leave under the insults of a Lou Reed on the verge of neurosis.

But there are several Lou Reed's, and the young mad dog of the 60s and 70s will give way in the following decades to a calmer, more introspective artist. Until becoming, at the end of his career, a rocker at the limit of the intellectual whose wisdom we listen to. But all these versions of the artist have finally been caught up by his sulphurous past and in 2013, another genius leaves this world.

Few singers can claim to have been spotted by pop-art master Andy Warhol. It is necessary to believe that between decadent artists, the connection is instantaneous since The Velvet Underground, the group founded by Lou Reed, decides to perform at the famous Factory, at the time frequented by an audience made up of artists and outcasts. In 1967, Warhol financed their first album The Velvet Underground and Nico. A commercial failure which will become a resounding success a few years later, the title Heroin, a self-portrait of a junkie, being erected as a rock classic.

"I fired Warhol" launched with insolence Lou Reed by tearing off the independence of The Velvet Underground. It will be as striking as short since the group splits in 1971. For Lou Reed, it is back to square one, direction the parental home. But it was without counting on another genius, David Bowie, seduced by the success however very confidential of the singer. Lou Reed then launches out in a solo career. His first album, Transformer and the world-famous single that accompanies it, Walk on the Wild Side, with its sulphurous lyrics, made history and propelled him directly to the rank of rock star.

Lou Reed's solo career took off in the 1970s and became more experimental in the 1980s. But the event came in 1990, on the occasion of the death of his mentor Andy Warhol. The Velvet Underground, now a legend, reunites for an unexpected concert at the Fondation Cartier, then for a tour of anthology in 1993.

A father for world rock

Less productive in the 2000s, the one who finally seems to be taking a wiser path is acting as a rocker for the rest of the rock scene. He collaborates with several artists including Gorillaz and Metallica with whom he recorded the album Lulu in 2011. His concerts at the Vieilles Charrues and the Nuits de Fourvière will be his last tour. In 2013, he is caught up by his demons and carried away by liver cancer.

Lou Reed may appear physically diminished, but he has lost none of his poise. And if he never really bet on his voice to seduce, the dark atmosphere which surrounds him was always that of the great hours of the Velvet Underground.

Tony after a concert in Paris

Icon of the 60s and 70s, Lou Reed reversed the trajectory of a rock that was probably too smooth for his taste. One will remember his sulphurous hits, his seditious concerts, his excesses, his lack of taboo, but above all, his way of telling the meanders of the lives of those who populate the shallows of this world.

The Lou Reed of 1965-1967, the one who wrote Heroin, I'm Waiting for the Man and Venus in Furs, is not a good student, a conscientious apprentice. On the contrary, and this is what still strikes us today, his genial insolence is already ripe and his sentence, as dry, brutal and burning as the lashes of the whip that one likes from time to time to give or receive at the Factory.

With the Velvet Underground, he had reinvented rock'n'roll, ten years after Elvis Presley, making guitars scream in art galleries, under the aegis of Andy Warhol. He was barely 30 years old when he became the historical figure to whom David Bowie turned to invent decadent rock, before all the successive waves of rock, from punk to the contemporary New York scene, claimed his patronage.

The Inrocks - The World