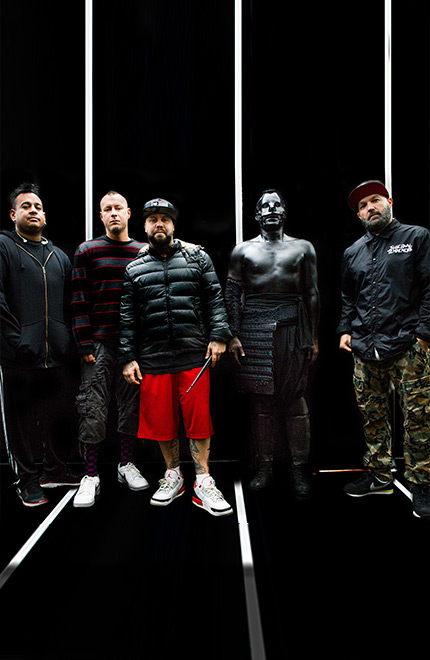 When listening to Limp Bizkit, it's important to remember that this is the band that pushed nu metal to its limits and ushered an entire generation into the new millennium. With more than 35 million albums sold worldwide and tracks recognizable from the first chords, thousands of fans are still jumping up and down from the saturated guitar introduction of "Take A Look Around" or "My Way".

What if Limp Bizkit was the most punk metal band of its generation? Because if there's one thing Fred Durst doesn't care about, it's just about everything, including the critics.

For the band, it seems that serious things don't count and in concert, subtlety has no place, unlike raging lyrics and a total release! In the pit, it jumps and it pogots, with in background the bass lines vibrating the ground, the power-chord always under tuned raised to the rank of art, and the rapped phrasing of a singer at the limit of the rupture.

The band was formed in 1995 around Fred Durst on vocals, guitarist Wes Borland, bassist Sam Rivers, drummer John Ott and a former House Of Pain member, DJ Lethal, who joined some time later. The singer decides to send one of their demos to the band Korn. Impressed, they give it to the producer Ross Robinson. The latter is then seduced by the style of the group, and Limp Bizkit starts to tour with House of Pain and Deftones.
The concerts will then follow one another at a frantic pace, as well as the television performances. Limp Bizkit's style attracted a large number of celebrity fans such as actor Brad Pitt and wrestler Mark William Callaway (aka The Undertaker), which contributed to their growing popularity.
Since then, the band has continued to tour the world. The audience always responds in numbers, chanting the hits that made them famous such as "Rollin'", "My Generation" or "Break Stuff". Intense sensations in perspective!

After a first opus whose visibility took off during the tour that followed, Limp Bizkit reached new heights with Significant Other. An album with strong hip-hop influences that propels itself directly to the top of the Billboard charts and opens a little more the horizons of nu metal. It was followed in 2000 by the excellent Chocolate Starfish and the Hot-Dog Flavored Water whose singles Take a Look Around (the soundtrack to Mission Impossible 2), My Way and Rollin' still serve as the anthem for the band's fans.

The band's fourth album, Results May Vary will be released without the emblematic guitarist Wes Borland who decides to leave the band. And despite the success of the singles, especially Behind Blue Eyes which has trumped the waves and still trots in our heads, the opus has gone down well by the critics. At the time, it even held third place for the lowest rated album in history. But as usual, it takes more than that to stop the band, which reintegrates its lead guitarist the following year and gets back on track for two new albums: Unquestionable Truth (Part 1) in 2005 and Gold Cobra, the latest production to date in 2011.

Admittedly, Limp Bizkit hasn't released a new opus since 2011, but the band is still far from being dead! In 2018 during their appearance at the Hellfest on Main Stage 2, they thrilled and jumpered more than 10,000 fans. It is said that even the Main Stage 1 audience waiting for Avenged Sevenfold started to poget on Rollin'!

Awesome! Even after all these years without albums, Limp Bizkit still sets the stage on fire with a very fit Fred! He jumps everywhere, he screams and above all, he goes towards his audience! All the classics have been reviewed and Wes Borland always ensures as much to the scratch. A huge atmosphere and a great show!

Jérémie, after a concert at the Olympia

Limp Bizkit is a UFO in the world of metal. Planetary hits demolished by the critics, sometimes approximate concerts that deflate an overexcited public and hyper charismatic members who seem imperturbable. But in this outburst of superlatives, it must be remembered that these guys were the pioneers of nude metal in the world and that, despite adversity and without any release for almost 10 years, they continue to fill and inflame the halls!

The Limp Bizkit, a living legend-myth band, finally took to the stage. The audience, conquered, screamed. They played one hit after another, [...] the band and its fans were in their element. So was I.

Limp Bizkit is said to be one of the most authentic punk bands of its generation, in that it has enjoyed worldwide success in spite of itself and with no regard for the first hat of its leader, the notorious tattooist, skateboarder and badger Fred Durst.