The ardour of the English, the energy of the French: Jean-Louis Aubert, Louis Bertignac and Richard Kolinka are back together. For if, for years, Téléphone did not respond, it is now a different story. The three fathers of French rock have rekindled the flame: that's really them!

Here, the earth is round, the moon is blonde. The desire to go to New York with them has never been so strong, as the energy of the beginnings has not lost an ounce of its electricity. They had forgotten to say goodbye, so Les Insus, a format three quarters full of Telephone, are back on the road. The youthful cry is intact, the riffs still as effective. On stage, everything is different, as if the years had frozen there, in the eighties with dreamy adolescence and rebellious streak.

It's time for a rejuvenating bath: a return to the past for a fabulous leap forward. The telephone rings. Jean-Louis Aubert, Louis Bertignac and Richard Kolinka may have taken a few discreet wrinkles, but their sweet hopes and pretty little stories always end up blowing a breath of fresh air into our ears. After successful solo careers, their reunion is beautiful and authentic. Like old friends and under the impulse of their manager François Ravard, they are happy like kids who remember the beautiful epics of yesterday.

Les Insus, sing with a youthful enthusiasm the federative hymns of the past. Quadras and quinquas make vibrate the pit. The young people of today follow the movement. Because these Rolling Stones in Paris, witnesses and actors of an era that the under forty years old cannot know, still have some in their legs. No bamboozling for the nice and angry ones from the capital: Jean-Louis Aubert's band always has the package to draw its melodious snarl. So let the shadows of the world dance!

They wanted to be called Television, but a group from New York had already stolen the idea: they will finally take the name of Telephone! The Parisian quartet starts with a bang. Each concert confirmed the previous one. A phenomenon was taking shape. In just a few months, the group was spotted by rock lovers. The release of their first record, Hygiaphone, is a total success. We know the rest! 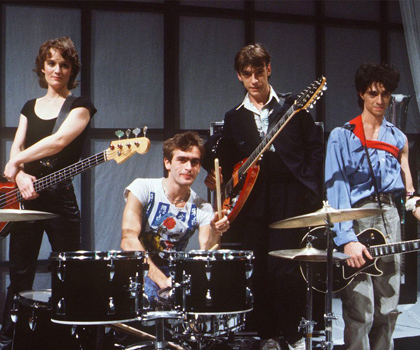 Despite the huge success, the tensions within the company are getting stronger and stronger. Corinne Marienneau decides to slam the door. Téléphone does not answer any more: the group splits up, to the great displeasure of the French public. The adventure ends, brutally, without warning. During the 90's, the rare attempts to reform the group will never succeed.

The time of an evening

It was unexpected. No one had really seen it coming. During 45 minutes of madness, Jean-Louis Aubert, Louis Bertignac and Richard Kolinka tread the stage of the Bs Palladium to cover, with a smile on their faces, the most beautiful hits of Téléphone. Axel Bauer is on bass: the show is fiery. 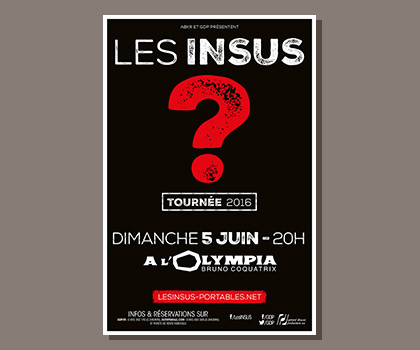 They are (almost) back.

It's a great news to make the fans of Téléphone cry with joy: the group is reformed, under the name of Les Insus. Only Corinne Marienneau is missing. The enthusiasm of the eighties still reigns, the energy is intact. And the comeback lives up to expectations: in less than eight hours, 200,000 tickets are sold for their fall tour. And it starts strong! At the Point Éphémère, a small room of 300 people full to capacity, Jean-Louis Aubert greeted his fans with a "Good evening. We had forgotten to say goodbye... And thank you! In all, more than a million people will see them on stage! Les Insus travels through France: history takes its course.