The gods of progressive rock
Ecouter 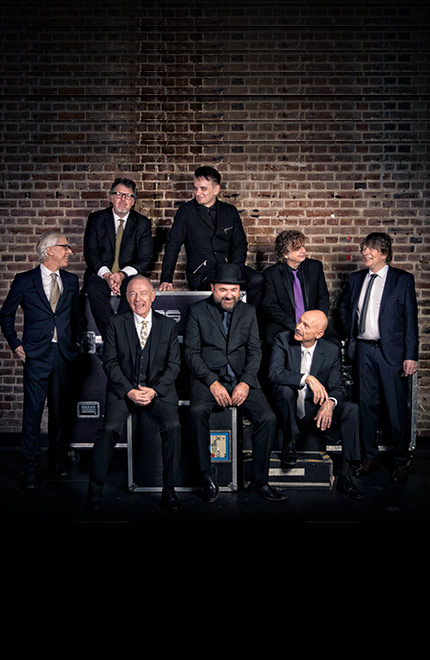 King Crimson looks like nothing else but King Crimson. These music chemists, led by an ultra-creative Robert Fripp, have revolutionized everything in their path, becoming the pioneers of progressive rock.

"King Crimson are the masters of the explosion, as unexpected as it is violent". These words come straight from the mouth of Nick Cave. To tell the truth, who better to pay tribute to this cult band, sculptor out of the conventions of a progressive rock with marked contrasts. Led by the intrepid and demanding Robert Fripp, the London band spreads, decade after decade, its sumptuous wings in a sky tormented by psychedelic clouds, flashes of madness and saturated arpeggios.

Up there is chaos. It's not the final goodbyes, routine clashes and unexpected reformations, which King Crimson collects in spades, that will make us say otherwise. For this group is an anomaly as much as it is obvious. Sometimes a metal monster, sometimes a master of jazz of yesteryear: Robert Fripp and his henchmen have formed a surprising creature, where sophistication marries, in a surprisingly compatible love, a will of anarchy placarded with clatter. Here, simplicity is banished. Only the alchemy of sounds counts.

Anything but commercial, their music with its jazzy winks is out of the box, both hypnotic and edgy, tame and unpredictable, repetitive but not monotonous. If it is infused today into the musical herbal tea of young bands, it is not by chance. For, from its beginnings, King Crimson stood out from the Beatles and Jimi Hendrix to revolutionize the sounds of his century and open a new path. Their clever pleasures: breaking codes, pushing the limits and deconstructing the commonplace with a golden technicality. That's what rock is all about!

Although England is an hour behind France, King Crimson is clearly years ahead. In the heart of London, the band's sound makes music lovers tremble with excitement and fear from the outset. We'd never heard that before: it's hard to resist the invitation of Robert Fripp and Michael Giles.

The founding act of progressive rock

Yes, King Crimson laid the foundation stone for what is now commonly known as progressive rock. So, as much to say that with its first album, In The Court Of The Crimson King, the band surprises its world with new sounds. The success is immediate, so much so that Robert Fripp's band is already opening for the Rolling Stones.

Legend has it that Robert Fripp is unbearably perfectionist and demanding. This is the main reason for the many separations and line-up changes. The band's first farewell took place in 1975: it was finally a break, as King Crimson made a smashing comeback in 1981 with Discipline.

King Crimson continues to surprise. This is evidenced by his album The Power to Believe, confirming with Martian creativity and extraterrestrial technique to what extent the band reinvents sounds every day to paint a state of mind out of time. If this band is one of the most influential in progressive rock, it is not by chance!

What a concert! I knew I was going to be bluffed, but at this point. I didn't expect to see a Robert Fripp in such good shape, and to rediscover such a rich discography. Every gesture, every moment, every note: everything was magic! Hats off.

Richard, after the concert in Perpignan

King Crimson is a legendary band, with boundless creativity and outstanding technique. Today, Robert Fripp still has a crazy energy, and his acolytes live up to his genius. To see them on stage, so many years after their debut, is an incredible opportunity. It's always a bluffing moment and a moment apart!

From the beginning, King Crimson has had a mix of vulgarity and sophistication. Alchemy always pays off when it's well dosed. There is some pleasure in seeing the band go to the primary impact of a riff or the beauty offered by a melody.

There is something hypnotic in the way they reinvent their songs, in the way they mix the sound material, in the way they constantly push back the limits of a genre - progressive rock - that clearly flirts with jazz. Robert Fripp is definitely the alien straight out of the sixties who has never stopped questioning himself.