The architects of metal
Ecouter 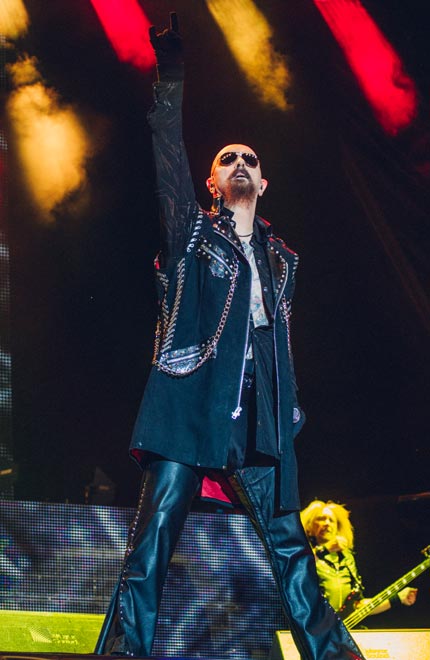 It's hard to say what could have excited these young Englishmen so much! Is it their origins? Birmingham, the city where they were born, is the birthplace of some of the best bands in the world, like Led Zeppelin, or their colleagues and mentors from Black Sabbath. Is it simply the need to express their anger at a time when the prospects for the future seem meagre and the oil shocks follow one after the other? Whatever the case, the members of Judas Priest have rage in their stomachs and they intend to make it known.

At the head of the race is Rob Halford, its singer, who not only has an outstanding vocal technique but who doesn't hesitate for a second to express himself frankly. When he's not singing, he screams. And when he's not yelling, he goes up in the high notes like no one else. And heavyweight fans make no mistake about it. In just a few years, he will have earned his nickname of Metal God!

Because those who wanted to follow in Black Sabbath's footsteps have revolutionized a genre and set new milestones in the complex history of metal. The double pedal hammered like never before, even smashed under Scott Travis' feet, the guitar necks mistreated by a Glenn Tipton and a K. K. Downing, the British, in a frenzy of excitement, accelerate and write the basics of speed metal, inscribing Painkiller as a reference that is always uncontrolled.

And if they have undoubtedly inspired generations of metalheads after them, it is not only through their music. The two guitar leads that answer each other and that will be the golden days of Iron Maiden, it's them! The heavy metal biker style, all in leather and spade bracelets, it's them again! The sometimes impressive pyrotechnic effects, an idea cheerfully taken up by Rammstein, it's still them! No doubt about it, the band has written whole sections of metal history and still continues its crazy epic today.

An album that beats

If the success of Judas Priest was built in the 70's, the 80's marked a turning point for the band who recruited drummer Dave Holland, in charge of giving power to the band!  It is done with British Steel which is one of the most influential heavy metal albums of the time. His singles Breaking The Law or United are regularly played on the airwaves and success is instantaneous.

A polemic without head or tail

In 1985, two teenagers signed a suicide pact and shot each other. A tragic story that comes back like a boomerang on the heavy band, accused of having passed on subliminal messages pushing to suicide in their songs. The case makes a lot of noise, the members of Judas Priest are summoned to justify themselves in court. Eventually and fortunately, the case will be dismissed, but it will have marked the end of the 80's for all metal bands, holding their breath to find out whether or not their music will continue to exist.

A double pedal in the shape of a revival

Judas Priest is recovering from this ordeal masterfully, with Painkiller, an album that has become a great classic and which capitalizes on the arrival of Scott Travis in the band. His footwork and mastery of the double pedal accelerates the rhythm and propels the group into a tour of anthology. The eponymous title is still mythical, "It's one of the archetypes of metal. A song about a fantastic creature that personifies metal - evil, energy and destruction," says Halford. However, after the Golden Age came the fall and at the end of this series of concerts, Halford decided to go it alone.

The return of Metal God

Without its emblematic singer, Judas Priest is only a shadow of the glorious group it once was. But after 12 years of separation, it's a surprise. Rob Halford is back on the road again for two tours that are a huge success and are headbanging heads all over the world. Immediately after, the band enters the studio to release Angel of Retribution, acclaimed by critics and audiences alike.

No, heavy metal is not dead!

If their Black Sabbath colleagues have decided to put an end to their career, this is not the case for Judas Priest! In spite of the loss of historical members, the band still has energy to spare, in studio, with their latest album Firepower which surprised critics and fans alike with its quality, as well as on stage where their performances are always impressive.

In spite of Rob Halford's well past 60 years, Judas Priest still gives concerts in the form of huge slaps. The two "young" guitarists breathe new energy into the band and we can feel that the band lives again as in its youth! We come out of there completely empty and speechless, but it feels good!

Alexandre, after a concert at the Zenith in Paris

Who said metal was dead? Certainly not the fans of Judas Priest, always in number at their concerts, leather jackets and spade bracelets in banners! If the band knows full well that it is already part of the history of heavy metal, it is not yet ready to be relegated to the closet. And when you see how fiery and energetic Rob Halford is always playing his hit songs, there's no doubt that you want to see them on stage.

From the beginning to the end of the show, Halford deserves his title of "metal god", proving to be imperial in his vocalizations, even the most demanding. The two guitarists scraped as in the golden age of the band. As for the bass and drums, held by the two pillars Ian Hill and Scott Travis, they pound relentlessly, even during particularly fast sequences, such as on "Painkiller" or "Hell bent for leather".

Firepower, Judas Priest's new studio album, is the musical slap in the face we no longer expected from this venerable heavy metal pioneer from Birmingham. A divine surprise that is not synonymous with revolution. It just so happens that Judas Priest is finally doing it again... very good Judas Priest.