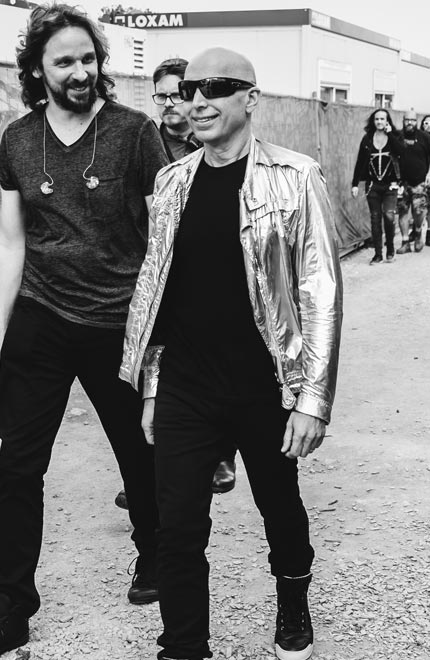 Armed with his dark glasses, Joe Satriani, Satch to his friends, is a little bit the daron of all guitarists. The model that everyone tries to imitate, for lack of being able to match him. Since the 1970s, he has revolutionized the use of the electric six-string, selling millions of albums of a unique and singular instrumental rock. And each time, his songs become classics or challenges for musicians all over the world.

Making scales or reproducing melodies that have been heard a hundred times has never really interested him. A fervent admirer of Jimi Hendrix, what he wants is to explore in the manner of his master and push the limits of his instrument ever further. By using modes, almost inventing tapping with a mediator or two hands, pushing the human limits of speed on the neck of his guitar, this virtuoso creates techniques that have now entered the popular repertoire.

If he is almost the father of instrumental rock, it would be wrong to reduce Joe Satriani to his field of excellence. For far from being a man of a single musical style, he takes pleasure in exploring jazz, boogie or blues to make these new sounds his own, transforming them and propelling them into his playing with disconcerting ease.

And when you see him on stage, transcending and becoming one with his guitar as if it were an extension of himself, you can understand why this genius has inspired, and even trained, a whole generation of guitarists. Briefly teaching at the prestigious University of Berkeley, Kirk Hammett, Alex Skolnick and Larry Lalonde learned by his side. And although the style is a bit out of fashion, Joe Satriani continues to shine, to perform and always plays to full houses, becoming a legend and confirming his status as a guitar hero.

It is in 1970 that the young Joe starts playing guitar very seriously, upset by the death of his idol Jimi Hendrix. But it's only 17 years later and with the help of one of his former students, Steve Vai, that his career really takes off. Surfing with the Alien propelled him to 29th place on the Billboard chart, a true feat for an instrumental album. From there, things were to follow for the guitar prodigy, as the following year he was called in as a back-up on his tour by Mick Jagger himself.

He says no to Deep Purple

In December 1993, Joe Satriani, already at the height of his fame, agreed to replace Ritchie Blackmore, who had just left the Deep Purple team, at short notice. Their tour in Japan reboosts the band and the guitarist follows with them in 1994. The other members then offer him to stay as a permanent member of the band but the musician refuses and regains the freedom he cherishes so much!

When legends come together

In the 90s, instrumental rock lost popularity with the arrival of the grunge wave and a more minimalist rock. But Joe Satriani doesn't let himself be dismayed and that's when he chooses to launch the G3 Guitar Extravaganza concerts during which he gathers the elite of guitarists. On the program, a battle of solos and jams, of course! A daring but successful gamble. "It's fun, unpredictable, wild, in short everything you want to find in a show," confides the main interested party, who is also the only permanent member of the event.

The guitar hero still has things to prove

With Shapeshifting, the guitarist offers us his 17th solo album, in the form of a musical and emotional journey. But, far from resting on his legendary status, he also has other projects in mind. He recently said that he "still hopes to one day do a G3 tour with Eddie Van Halen and Jimmy Page! ». But he also wants to release "two different records in the coming months. One would be another instrumental album, and the other one would be a vocal album, centered around my live band. So we should hear from him soon!"

It was the first time I saw Joe Satriani on stage and it was by far the best concert I've ever seen or heard. Fishing, rhythm and highly motivated artists having a great time. After Hendrix's death I never got 100% hooked on a guitarist, but here it is! A perfect match for Satch!

Jean-Louis after a concert at the Cité Internationale in Lyon

Joe Satriani is a UFO, even among his companions raised, like him, to the rank of guitar heroes. And for good reason, he's not just a virtuoso technician. He's also one of the few to have popularized instrumental rock to such an extent, filling entire halls with spectators clinging to his guitar playing, savoring every note, every solo and every riff!

Joe Satriani doesn't have much to prove anymore. He's a virtuoso guitar apostle, the one reserved for a handful of angry, crazy guitarists willing to sacrifice their fingers (and their egos) in a brave attempt to match the master, and with the help of YouTube tutorials, the musician continues to organize monster tours during which he sprays his undeniable talent on a transient audience that's committed to the cause.

2015
9 concerts
2014
12 concerts
2013
2 concerts
2010
3 concerts
2008
3 concerts
2007
1 concert
2006
10 concerts
2002
1 concert
See more
Book now
Remonter
gérard drouot productions uses cookies on this website. With your approval, we will use them to mesure and analyse your visit on the website (statistic cookies) to adapt it to your interests (customized cookies) and to provide you with relevant information (third party cookies). Customize
Loading