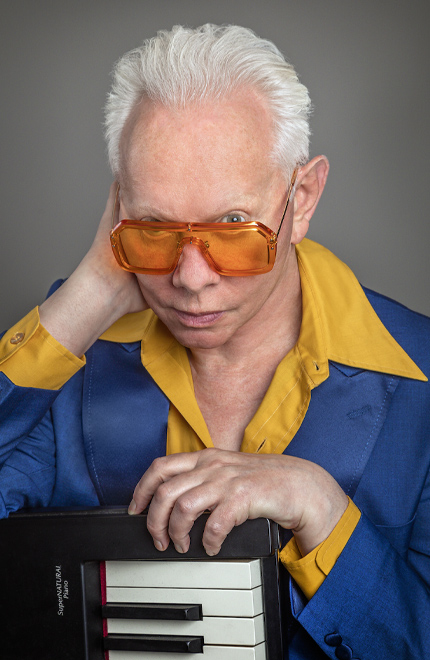 Eclectic is surely the word that best suits his skin. Joe Jackson likes audacity, so he decided to embody it, daring to venture fearlessly into territories that seemed forbidden to him. His trademark: surprise, again and again.

"I've never tried to be fashionable, in the spirit of the times, because that's the best way to be quickly old-fashioned". So is this his secret to marrying the timeless? It must be. Because Joe Jackson has touched everything, taking the jazzmen's country by storm with his pop that has its roots in punk and new-wave. Coming out of a gloriously sick childhood, where books and vinyls were his only comforts, the child from Burton, in the West Midlands, spent his life searching for absolute honesty and constantly reinventing himself.

"As soon as I feel it sounds like something I've already done, I destroy it," he sometimes says, as a response to those who boil over from not really being able to figure it out. Clever or completely pompous will be the one who will dare to stick a label on his back, so much this shy charismatic carries a discography with a thousand nuances. His albums are surprising, even disconcerting.

That's what Joe Jackson is like: impossible to put in a cage, because he's as free as air, and sometimes misunderstood, because he's avant-garde. Is this, by the way, the hallmark of a genius? Probably. Today, in any case, since Berlin, where he set down his suitcases, the audacious prince of mischievous pop continues to add new colors to the delicately colored work of his life. Yes, he has class, Joe, as embodying elegance with finesse of mind and body.

Joe Jackson is a daring man, and daring becomes his raison d'être and his reason for living. While he is adored by the press and the English public, the man from Burton tries his first master stroke, venturing into the cosy lands of jazz. He then released Joe Jackson's Jumpin' Jive, a tribute to the greatest jazzmen of the century, including Louis Jordan and Cab Calloway. It was his first break with pop music, which he felt had become too commercial and which he didn't hesitate to jostle in his interviews.

If you're looking for Joe Jackson somewhere, look somewhere else. For he is always where he is not expected. His instrumental records, including Night Music (1994) and Heaven and Hell (1997), are proof of this. He demonstrates that he is a composer in his own right, as evidenced by his time at the Royal Academy of Music in London when he was younger.

He had abandoned it for a while, but Joe Jackson still loves it, despite his few statements to the press: so he's back to pop, the one that took him to the top in the late 1970s. He then presents Night and Day II, on which appears, in particular, the sublime Marianna Faithfull.

Madly up to scratch

"Joe Jackson never gives up". It is with this title that Rolling Stone magazine introduces Fool, the new album of the English virtuoso. Once again, artistically speaking, the record is a real gem of modern times. Indeed, the Burton man brilliantly maintains a pop-jazzy spirit, like a short but breathtaking synthesis of his career.

I was curious to discover it on stage. It was great: I was transported by this concert. Joe Jackson is still a class act. English class. And behind his keyboards, he also knows how to show off his rock face. In short, it is absolutely necessary to discover him live!

Lise, after a concert in Paris

What we like about Joe Jackson is that as soon as he releases an album or goes on stage, we don't know exactly what to expect. He's able to surprise us all the time, between pop, punk, jazz. He knows how to stand up no matter where he goes. Some would say that he is difficult to pin down. That's probably the definition of a genius. You absolutely have to go and see him!

The sound is resolutely rock, the arrangements and the setlist allowing only a few deviations, a bit as if the Englishman wanted to prove that he is spiritually a child of punk - even if, like the Talking Heads, he has always favored the side tracks.

In his forty-year career, Joe Jackson is still as hard to pin down as ever. If the words, carried by this always so colorful voice, still know how to turn into slaps, it is indeed this pop-jazzy melodic vein that maintains Joe Jackson always so charming when he makes himself solemn

2022
1 concert
2019
6 concerts
2016
4 concerts
2012
6 concerts
2010
12 concerts
2009
5 concerts
2008
3 concerts
2007
2 concerts
See more
Book now
Remonter
gérard drouot productions uses cookies on this website. With your approval, we will use them to mesure and analyse your visit on the website (statistic cookies) to adapt it to your interests (customized cookies) and to provide you with relevant information (third party cookies). Customize
Loading