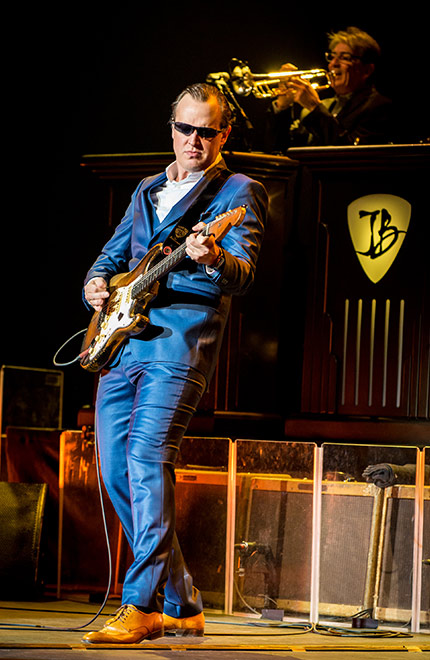 No doubt, Joe Bonamassa has the blues in his veins. His guitar playing impresses as much by its technicality as by the ease with which he delivers it. His voice, as rocky as one could wish for, seems cut out for the nostalgic sounds he loves so much. And if we didn't know how hard this artist is working, it would be easy to fall into an excess of jealousy in front of his immense talent.

Like it or not, Joe Bonamassa has already become a legend. He is one of the so-called guitar heroes, alongside his idols Eric Clapton, Jimi Hendrix and Santana. For with an incisive style, he attacks each note as if it were the last, almost redefining the shred and reaching new heights of virtuosity. On stage, dressed in his most beautiful costumes, he plays the dandy, on the verge of the great jazzmen of yesteryear, balancing his inimitable style and his unmistakable sound identity.

But the singer is not just a solo artist. He has released and contributed to almost as many albums as he has years. An explosive record that he feeds thanks to some rather daring side projects. His hardrock supergroup, Black Country Communion, formed with the legends of Deep Purple, Led Zeppelin and Dream Theater but also more recently with The Sleep Eazys, an instrumental project that pays tribute to his lifelong mentor, Danny Gatton.

If Europe doesn't necessarily do him justice, on the other side of the Atlantic, the artist is a sacred monster, an adulated musician and evangelizer of the blues that he has at heart to preserve. Committed, he created the Keeping The Blues Alive foundation, which aims to transmit his passion to the younger generations by financing music lessons in public institutions. And we understand him, because listening to the musicians that the blues delivers over the generations would be a shipwreck to deprive us of it.

The prodigy is early

His father owned a music store, so Joe Bonamassa was almost born amidst vintage guitars. But it is certainly thanks to an innate talent that he very quickly rose to the side of the greatest guitarists of the moment. After studying with Danny Gatton, he opened for the famous BB King at only 11 years old! "He was one of my biggest fans" remembers the singer, "the best advice he gave me? Stay yourself, don't change for anything or anyone. What you are doing is right".

In the footsteps of his idols

For nearly 20 years, the master refined his scales, becoming a reference in the blues world. But it is in 2009, with the album The Ballad of Johnny Henry, that he will reveal himself on the popular scene. The consecration? His concert at the Royal Albert Hall in London, in the footsteps of his idol Eric Clapton, who did him the immense honor of sharing the stage with him that day on Further on up the Road.

The insatiable master of the blues

As usual, the incredible musician has talent to spare and projects galore. He recently launched The Sleep Eazys, an instrumental project to pay tribute to his mentor Danny Gatton. But he doesn't intend to stop there: his new solo album, Royal Tea, is scheduled for release at the end of the year, and we've heard that his band's next opus, Black Country Communion, is under negotiation. Business to follow!

It seems a little odd to attend a Joe Bonamassa concert from the comfort of a chair. Fortunately, the audience cracks very quickly! Everybody rushes in front of the stage, the room is standing! And the band doubles in intensity! Bonamassa's guitar sounds like caviar, and his ability to modulate the dynamics and intensity of his playing, both within a single track and over the entire 17-song set, is impressive.

Baptiste after a concert at the Palais des Congrès in Strasbourg.

Less well known on our side of the Atlantic, we are nevertheless fortunate enough to welcome the prodigious Joe Bonamassa almost every year in France. Each time, the artist's energy, his unparalleled guitar playing and his upbeat solos take us to seventh heaven. No doubt about it, he already deserves to be inscribed in the Pantheon of guitar heroes!

This American "guitar hero" is distinguished by his collection of six strings (he is said to have 160) and by his playing that tackles all genres. With him, one sometimes has the impression of going from Pink Floyd to Deep Purple via blues and FM rock. Until you realize that each song is meant to showcase your dexterity.

We enter the immense. The cosmos is at our doorstep! A riff and 'Monsieur' enters the stage, all in grey mouse clothing, with the intro of his latest hit. The guitar explodes, the rhythmics hammer. The tracks follow one another, without leaving time to catch his breath. We revisit in live these pieces which leave us stunned every time they are played on our living room channels.