The Great Lady of Folk
Ecouter 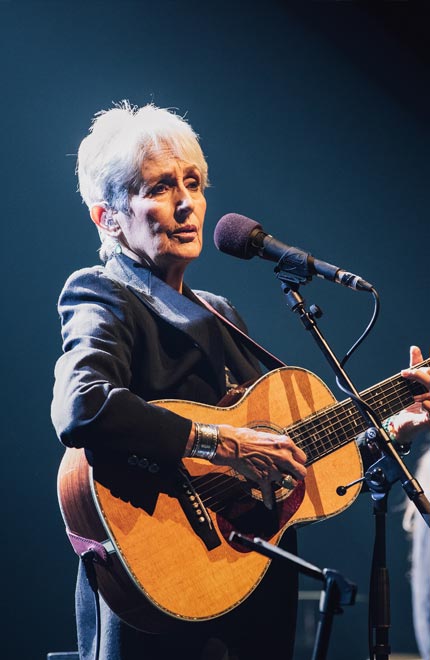 Joan Baez has always fought hard. With only a dry guitar as her only weapon, the queen of folk music has been the spokesperson, since the sixties, for tolerance, peace and love between peoples. Her struggles sublimate her music, her convictions overshadow her lyrics.

There are a thousand reasons to love Joan Baez. A peaceful fighter with incorruptible convictions, the Queen of Woodstock is a great lady. Through her music, she has lulled generations of idealists, punished a world polluted with injustice and put an unfortunate racism on the ropes. No matter how old she is, the activist with the fragile, sober and moving voice always rises with strength, there alone on stage, guitar in hand. Bob Dylan is his male mirror, Martin Luther King his battle companion.

Each time, Joan Baez enters the ring with poetry, linking the songs like rounds, to put down her worst enemies: war, persecution and discrimination. Her simplicity is touching, her honesty bluffing. His song, inhabited by his hopes for a dignified world, tells a life with multiple episodes, punctuated by a revolt without revolution, rage without violence, ballads without honeyed sweetness.

Demanding to her fingertips, the Madonna of the Poor embodies perfectly what she thinks. Her ethics, her guitar and her crystalline voice: Joan Baez doesn't need any more to bewitch the stage and make the eyes of her admirers shine. Here and elsewhere, her spirit of resistance inspires us, her hymns transcend us. The New York songwriter, an icon of protest song, is a rebel filled with self-esteem, the solid guardian of a fragile humanity. Hats off Madam!

It all starts at NewPort

In Rhode Island, Joan Baez is doing her weapons alongside Bob Gibson. This first collaboration, in which her voice with its moving fragility seduces, allowed her to be noticed by Vanguard Records, an American label, known since then for having accompanied jazz and folk figures. She released her first album the following year, with immediate success.

Of all the battles

This is the event that changed the mindset in the United States: Selma's march. That day, Joan Baez accompanied her friend, Martin Luther King, in a natural impulse. Her presence will reflect a long and determined struggle to end discrimination against the African-American community. Two years later, she will once again commit herself against a war that revolts her: the war in Vietnam. This unfailing commitment will bring her some trouble with the justice of her country, but her convictions, unalterable, do not fear threats.

That year, Joan Baez stepped aside to flirt with more pop sounds on the album Diamonds and Rust. This was to be her greatest commercial success, the single of the same name reaching the top 10 singles. A success that will not make her forget her commitments and the following years will see her perform in many solidarity concerts such as Live Aid in 1985 or the tours of Amnesty International A Conspiracy of Hope and Human Rights Now!

Protest is his art

She stood up against the Chinese and Brazilian dictatorships and contributed to the pacifist revolution in the Czech Republic. Joan Baez has become an icon of the protest song worldwide. This time, the New York singer is actively protesting against the war in Iraq. Four years later, her musical struggle was recognized with a Grammy Award for lifetime achievement.

As popular as ever

In June 2018, the folk diva will be at the Olympia in Paris for ten evenings that will all be sold out. A triumph for the woman who has influenced the world of music and has contributed, all over the world, to the evolution of morals. To thank her French audience, she will return in February 2019 for five more exceptional performances.

Formidable, grandiose. Presence, charisma, simplicity: Joan Baez has it all.  I almost feel like crying because I tell myself that I might never see her again. Now we can die in peace, we've seen her.

Nicolas, after the concert in Perpignan

It was in 1996, at the Café de la Danse in Paris. Joan Baez, for a few years, was discreet and gave few concerts in France. With our help, she came back to the forefront of the stage to breathe new life into her career. That evening, we filled the hall, without refusing to accept anyone. Since then, Joan Baez has often played to sold-out crowds and her performances are always exquisite. She is a great lady, and we are proud to accompany her!

In France, Joan Baez played a full house at the Olympia. As for her latest album, it sold like she hadn't done for forty years. It's not so easy to leave such an emblematic artist, who has always combined the great pacifist struggles with music.

Dark room, short introductory music and already the queen of folk appears in the spotlight. Greeted by the ovation of a conquered crowd, the singer quickly begins Don't Think Twice, the song of her old love Bob Dylan. Once again: a huge thank you, Joan Baez.