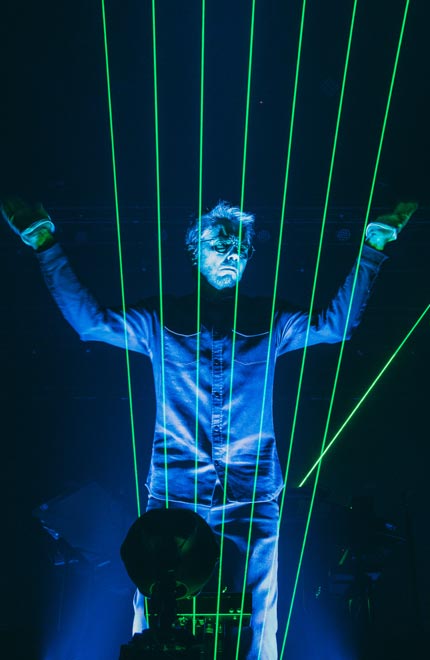 In his own way, through his explorations in the deep waters of music, Jean-Michel Jarre has changed the world. A man of the avant-garde, he has opened up a new field of possibilities, creatively destructuring the preconceptions of modern music.

"He is at the same time a painter of cities, a musician of worlds and a decorator of ecology". The words of Gonzague Saint Bris are apt, as Jean-Michel Jarre is a being apart. Pope of electronic music, he then turned the contradictory energies of punk and disco of the time upside down to completely overturn the logic of composition, going so far as to reinvent the very notion of the instrument. He even reinvented the very notion of the instrument. Still machines, laser harp, half-moon synthesizer: he surprised, even disconcerted, radically revolutionizing the way of seeing the stage, of playing with the lights and grafting the image to the music. It's a fact: Jean-Michel Jarre, timeless by nature, has oxygenated our eardrums thanks to his audacity.

But he owes it all to his master, Pierre Schaeffer, engineer and researcher. "He helped me to understand very early on that music is not necessarily a question of notes, but that everyday noises can also make music," the French virtuoso later confided. As a nod to the second-hand tape recorder that his grandfather, an inventor, had given him as a child and which was the fruit of his first experiments, Jean-Michel Jarre has therefore spent his life dissecting sounds and inventing a vocabulary well above the commonplace.

As an undisciplined forerunner, he raised concerts to the rank of spectacular attractions by giving them a monumental dimension. And for this, he does not back down from anything. The pyramids of Giza in the background for the millennium? Done. A giant concert in Tian'An Men Square? Done. A 3D avatar a la Matrix to face the Covid? Count on it! By innovating and reinventing himself over the years, Jean-Michel Jarre is still one of the trend setters today.

Oxygène, the masterpiece of the Master

If you ask him which record marked his career, it is a good bet that Jean-Michel Jarre will answer Oxygène without hesitation. This musical journey of a new genre, unheard of at the time, gave birth to a world hit and established the French composer's fame. Between joy and darkness, the concept album is indeed a small earthquake in the music world: we had never seen this before.

How do you get electronic music back on stage? This July 14th, Jean-Michel Jarre, with his convoluted machines and his laser harp, has found the magic formula. So that day, in front of a million spectators, the virtuoso from Lyon makes the Concorde vibrate. It is his day of glory, and the affirmation of one thing: electronic music is going to change the world. This date will moreover enable him to export internationally, notably to China, where he will become the first Westerner to play since the death of Mao.

Nasa is under the spell

When NASA celebrates its 150th anniversary, inviting the cosmic hymns of Jean-Michel Jarre seems obvious. One year after the release of his album Zoolook, which led him to collaborate with Marcus Miller, he returns in force to conquer America. For the occasion, he will compose the sublime track Last Rendez-vous, which will be the central inspiration for his future album.

On the offensive in defence

It is a concert that will make history: La Défense, in front of 2.5 million spectators. What better way to celebrate the French revolution? It's a record, and the show is grandiose. Jean-Michel Jarre is not ready to forget this moment. "It is the most moving moment of my career, a magical concert", he will tell us much later.

A pharaonic concert for the millennium

Of all Jean-Michel Jarre's concerts, this one is undoubtedly the most inordinate. To celebrate the passage of the millennium, it is in front of the pyramids of Giza that the artist sets up his stage for one of the longest shows of his career. In a surrealist fog, the four hours of set divided into two parts, one in the evening and the second in the early morning, brought together up to two million people online. Never seen before !

Back to the roots

This concert bulimic followed several tours at the end of the 2000s with the Oxygène Tour 2008 followed by Indoors in 2009 and the sober 2010. He began a return to his first love by putting synthesizers back at the heart of his music and affirming once again his musical imprint in a world now dominated by electronic music.

Over the years, Jean-Michel Jarre has produced an outstanding discography, without ever falling into the trap of easy or redundant. Once again, with Equinoxe Infinity, a two-pocket album, the composer, who has been committed to ecology for years, surprises, with a retro-futurism that questions the future. Le Monde will write: "Jarre here reconnects with the melancholy and dreamy young man he remains, exposing the most seductive side of his creativity, a dynamic and mischievous ambient".

Often dancing, the concert is even a hair's breadth away from becoming a real party: Jean-Michel Jarre jumps up and down, enjoying himself like a teenager, and his pleasure is infectious. The show is grandiose and on a par with the man, with an impressive display of means. Seeing Jean-Michel Jarre in concert remains something unique, a total experience to be lived absolutely.

Frédéric, after a concert in Lille

Jean-Michel Jarre has clearly invented a new way of composing and conceiving music. He is a living legend who has been able to translate the complexity and abstraction of electronic music on stage, thanks to outstanding shows, such as at La Défense or in China. It's not a concert, it's a real experience that you live: you must absolutely go and see it !

In his vast career, Jean-Michel Jarre has made a speciality of playing in the most exceptional places and at the foot of the most exceptional monuments. So his presence at Coachella, the very trendy festival, was perhaps the most surprising. In front of an audience of kids who barely knew him, Jarre had one card to play and the American press was unanimous: dazzling. Pure

Lasers, smoke, images broadcast on giant screens, especially those filmed by a mini-camera installed in the master's glasses: the staging was spectacular for a show in line with the grandiose concerts of his long career.