A folklore full of emotions
Ecouter 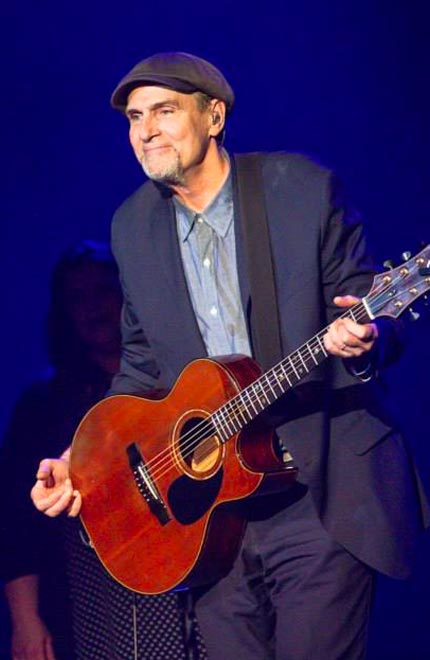 James Taylor has long since entered the very closed circle of successful folk songwriters. But this sensitive singer-songwriter continues to flood the airwaves and to aim for the top of the charts. Acoustic guitar, lyrics as intimate as ever, the man who embodied folk romanticism in the 70s has not finished making us vibrate.

For James Taylor, it is first and foremost delicate and uncluttered melodies under a warm and deep voice that has been reciting, since its beginnings, moments of life that are always confidential. For better or for worse. Thus, Jump Up Behind Me recounts the night when his father didn't hesitate to travel hundreds of kilometres to free him from his heroin addiction, when the famous Fire and Rain, about the internment and suicide of one of his friends, still moves to tears. Listening to this music that tells the story of his soul and soothes ours, one often feels privileged.

And if emotions seem to flow so easily from a guitar mastered to perfection, it is perhaps because James Taylor is also an example of redemption. With his hands broken at the beginning of his career, he has to wait many months to start playing again. Later, he became addicted to heroin and did not hesitate to seek help several times in psychiatric hospitals. And as we know, geniuses who survive these kinds of ordeals have that extra talent, that extra soul that makes their compositions so authentic that they touch the universal.

If the emblematic songwriter and singer seems to have calmed down today, he continues to deliver percussive, sometimes committed lyrics. But always to those soft melodies that make you want to sit with him by the fire and listen to him until late at night.

James Taylor, symbol for a generation of songwriters

After having signed a first album on the Beatles' Apple label, it was during a stay in a psychiatric hospital that James Taylor gave birth to the brilliant Sweet Baby James. His single Fire and Rain was a huge success, propelling the songwriter to the cover of Time the following year and revealing him to the world as the "face of new rock". From then on, the success continued, culminating in the single You've Got a Friend, written by Carole King, which reached No. 1 on the Billboard Hot 100.

A new start for the gentle giant

This year marks the end of James Taylor's first marriage but also the end of his relationship with drugs. If the singer thought for a while about retiring, it was a concert in Rio de Janeiro in front of more than 300,000 people that made him change his mind. "The audience knew my music [...] Having that kind of validation at that time was really what I needed. It helped me get back on track," he said. He will also write Only a Dream in Rio as a tribute to that particular night.

After six years away from the studios, James Taylor returns once again with the very good Hourglass on which we find Jump Up Behind Me. The album is critically acclaimed and wins a Grammy Award, the second of his career. RollingStone said: "Hourglass shines with the melancholy contentment of a man who lived life to the full and learned well".

Before this World goes to the top of the charts

At 67 years old, James Taylor still has his say and proves it by releasing Before this World. For the first time, and despite the more than 100 million albums already sold, his album has climbed to the top of the charts, reaching Billboard number one. This success will be followed in 2020 by an album of cover versions of songs from the 1930s that seem to have come straight out of the repertoire of this master of folk music.

You can sense that James Taylor is happy to be here. He speaks our language well and makes the effort to present us his pieces in French. And here we go for more than an hour and a half of nostalgia where he comes back on his most beautiful songs, the voice and the impeccable arrangements. From the great West to South Carolina, we travel with him and it feels good!

Alicia, after a concert in Bordeaux

While James Taylor was successful in the 1970s, he has maintained a steady career. He is therefore not a fading artist that we regularly find in France, but a songwriter who always has things to prove and to offer. French-speaking, his concerts are always a nice moment of sharing during which he never tires of playing his flagship titles, enamelled with novelties, in front of a public always conquered.

James Taylor has been walking his large carcass on stages around the world for more than forty years, defending a certain idea of folk, between classicism, elegance and timelessness. Through his artistic career, he has defended an America where stories are told by the fireside, where the sadness of love is sung by the riverside, where people still believe in the promised land.