The Godfather of Soul
Ecouter 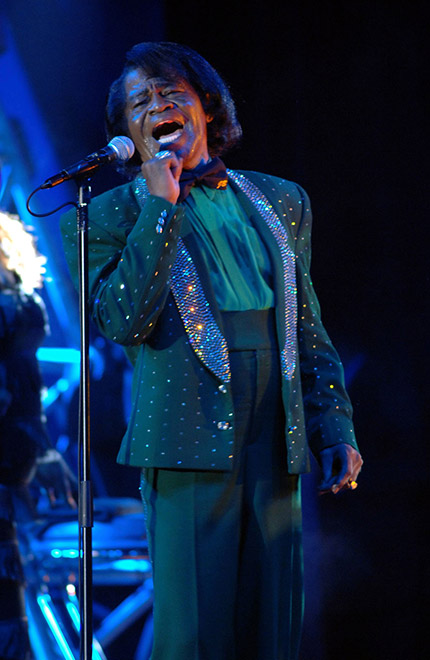 His name evokes a legend, that of a black child born under segregation, who in just a few years has become a phenomenon whose immoderation is matched only by his talent. With 45 gold records and more than 200 million albums sold worldwide, he has left his mark on the music industry, reappropriating all styles, from soul to hip-hop, and inspiring other mythical artists, including Prince and Michael Jackson.

For in the 1960s, if white America only had eyes for the Beatles, black America danced to James Brown's hits. With songs that could belong to the world heritage of humanity such as I Got You (I feel Good) (1965), It's A Man's Man's World (1966) or Get Up (I Feel Like Being a) Sex Machine (1970), each of his appearances provoked at best a concert of high-pitched screams, at worst, collective hysteria. It must be said that the Godfather of soul sends! On stage or in television shows, his ardour explodes. He swings, he dances like no other and, above all, he masters his art vocally perfectly.

And if we can call him one of the superlatives, James Brown is above all a precursor. "Hardest working man in show business" as he likes to call himself, he dynamites soul, funk and delivers hit after hit. Some say that we have not yet understood a quarter of the legacy of this immense artist and this may well be true. Musical precursor then, but also precursor in contestation. For with his status as a black icon, then popular, his career remains intimately linked to the racial struggles in America.

Like any genius, James Brown also had his share of shadows. And the end of his career was marked by his escapades. Prison, rehab, and one of the celebrity magazines had gradually overtaken the release of the new nuggets to which the world was accustomed. But to tell the truth, nothing can really taint the story of a legend. When he died in 2006, the legendary gaps of Mr Dynamite were only a drop in the ocean of his immense work.

Prison as a springboard

A prodigy can be born out of a bad patch and James Brown knows something about that. At the age of 16, he is incarcerated for armed robbery. The story could have ended there, but in prison he met singer Bobby Byrd, with whom he formed a gospel band. Young James is launched into music and nothing will stop him.

The tube machine no longer stops

The 1960s will reveal this explosive bomb to the world. Signed on the King records label, he released a series of hits that would end up at the top of the charts. It's hard to name them all as the machine gets carried away, but among these soul masterpieces, we can safely place Out of sight (1964), Papa's Got A Brand New Bag and I Got You (I Feel Good) (1965) as well as It's A Man's Man's World (1966). The TV sets snatch the star, the groupies fade away, James Brown reaches his peak !

The saviour of Boston

Legend has it that on April 5, 1968, the day after the assassination of Martin Luther King, James Brown maintained his concert in Boston. In a context of urban riots, the atmosphere is ultra-tense. The police are about to intervene but James Brown holds them back and speaks out, "We are black! We are Black! Let's not give a bad image of ourselves ! ». The crowd calms down, the show resumes and tonight officially becomes the night the singer saved Boston.

The 70s marked a turning point for James Brown who gradually lost all the members of his band. Far from being discouraged, he teamed up again with Bobby Byrd to create The JB's and directly released a worldwide hit, Get Up (Sex Machines) in 1970. It was also at this time that he began to reach a much wider audience, going from African-American icon to world icon, quite simply.

The world is an orphan

Although the star had become more discreet musically as he grew older, giving way to new popular music, James Brown nevertheless took to the stage for the rest of his life with astonishing energy. In June 2006, once again, he set Paris ablaze, standing on the stage of the Palais des Congrès! When he passed away, he left the music industry an orphan, but also an immense legacy, which it will take many years to fully understand.

This concert was for me a moment of rare intensity that will remain engraved in my memory. James Brown, the legendary master of soul and funk, has lost neither his desire nor his stage presence. In this respect, he is unrivalled. He remains one of the best showmen in the world and knows how to move a venue like no one else.

Florent after the concert at the Palais des Congrès in 2006

One is inevitably speechless in front of the endless talent and stage presence of such a musical legend. And of course, we feel grateful to have accompanied him on his visits to France, in a Congress Palace full to bursting point.
On stage and over the years, he was always that surge of energy that surprised the world in the 1960s. He is one of his immense artists whom we will miss for a long time to come.

Everyone knows a James Brown tune. A melody that you find yourself humming when your spirits are at their highest. A tune that makes you want to dance, stomp your feet or nod your head. James Brown is a myth, a monument to funk, soul... music in general.

Incomparable showman, king of soul, prince of funk, James Brown left an indelible mark: from music to dance, in rock, pop or hip hop, the singer who died in 2006 has never ceased to inspire.