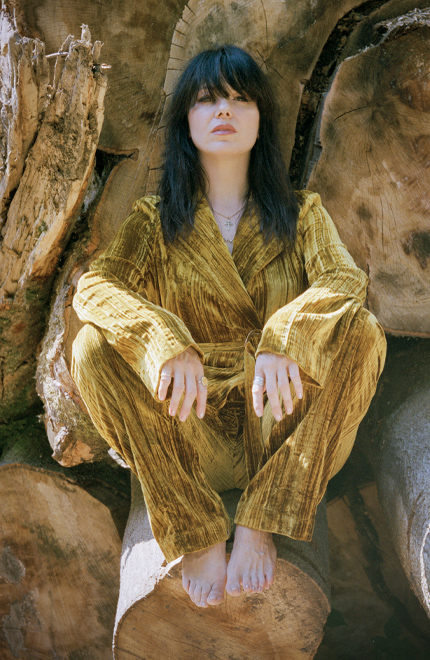 Imelda May is a unique artist both in her music (a mix of surf music, blues and rockabilly) and in her style. She was revealed by her first album "Love Tattoo" which went triple platinum in Ireland. She continues to tour the world in her cool, retro style that literally takes us back to the 1950s.

Accustomed from a young age to singing rock'n'roll, jazz or blues (Elmore James, Billie Holliday), she became passionate about rockabilly. She then preferred to abandon her studies to devote herself to music and became a singer in the group Swing Blue Harlem.

At the age of 16 she made her first scenes in bars and worked more and more on her voice until she found this voluptuous, rich and unique tone. She created her own band in 2006 and released "Love Tattoo" which quickly became famous. Attracting the attention of Jools Holland, she participated in his tour and then appeared in his program "Later" where she played in front of an audience including Jeff Beck, Elbow and Roots Manuva.

A year later, she became the first Irish female artist to top the Irish album chart since Mary Black almost twenty years earlier. Beyond the exceptional musical skills that brought her public acclaim, it was her amazing style and inimitable '50s look that propelled her into the spotlight. She got off to a promising start in 2010 by playing alongside Jeff Beck at the Grammy Awards and then opening for Wanda Jackson.
Imelda May will share several times the stage and television with Thomas Dutronc. The two sing a duet in 2013 on the single version of the song "Clint". At its release in June 2014, her album "Tribal" reached number 3 in Great Britain.

However, the singer will change the formula for the next album, "Life Love Flesh Blood", which she records under the legendary T-Bone Burnett. Jeff Beck will come and play a guitar on this record, giving a rock color to this rainbow of styles mixed with soul, blues, jazz, country...

We can only advise to see Imelday May in concert for a terribly retro moment !

2018
1 concert
2017
1 concert
2016
1 concert
2015
1 concert
2014
7 concerts
2013
1 concert
2012
1 concert
2011
1 concert
2010
2 concerts
2009
1 concert
See more
Book now
Remonter
gérard drouot productions uses cookies on this website. With your approval, we will use them to mesure and analyse your visit on the website (statistic cookies) to adapt it to your interests (customized cookies) and to provide you with relevant information (third party cookies). Customize
Loading