The trigger of hard rock
Ecouter 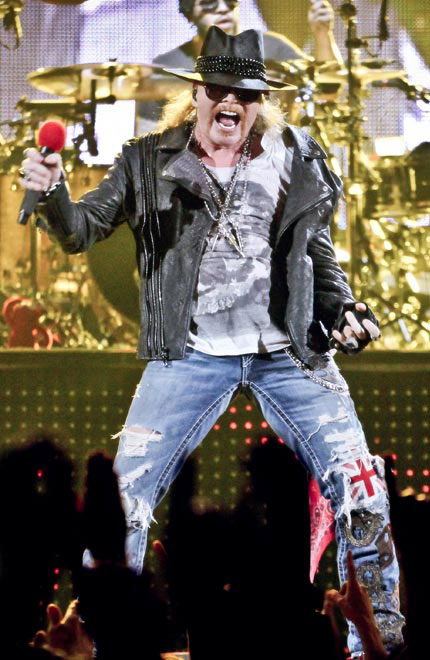 Guns n' Roses likes crowded stadiums, as if that's what it takes to contain the volcanic energy of this slightly energetic band straight from Hollywood.

"Playing again with Guns N'Roses is like going to church". Duff McKagan's words. Because the Los Angeles group has finally decided to set the table again to draw hot roses that scratch our routine tranquility. Axl Rose and Slash have become buddies again, and bursts of timeless leathery melodies come to the surface. Energetic rock, grandiloquent clips, axe-cut hair and the look of rebellious brats: it's time for chaos and souls who "don't give a shit".

Yes, Guns N' Roses is a state of mind, a din to be startled and a great mass that has from God only the crazy guitar flights and the extended solos of the genius guitarist Slash. Because no matter how many times they knock on heaven's door in a sumptuous cover of Bob Dylan's song, these guys seem perfect for staying here, shaking the earth. Slash, with his pacemaker, continues to swing his Gibson at the plectrum, and Axl Rose still dives into a crowd that makes waves with his fists up. Yes, the indomitable Californians, who masterfully marked the rock of the 90s and who always sailed against the current, have lost none of their ardour.

Far away from Canter's Deli, the old underground restaurant where they used to rehearse, the band seems to have shot the wrinkles, once and for all, as if to preserve their youthful thirst. Damn, how good it is to see them together again, to share those fiery moments that animate a hard-rock as powerful as lightning. Guns N'Roses is back, and yesterday's energy returns at full gallop. These guys know how to set fire to stadiums and halls like nobody else !

An angry group from Santa Monica

A fusion between two Californian bands - the Hollywood Roses and the Guns - the members of Guns n'Roses, barely out of a shabby studio in Santa Monica, enter the stage and quickly make a name for themselves at the Roxy, a mythical Hollywood bar, playing an astonishing cover of Aerosmith. 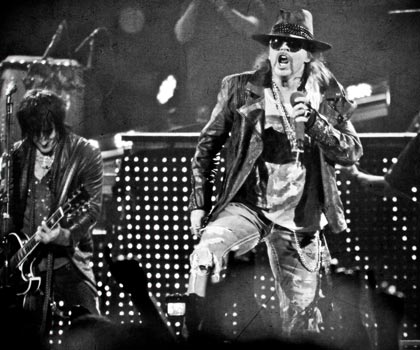 A first record that tears

Signed to the alt-rock label, Guns n'Roses presents Appetite for Destruction, their debut album. A few months later, their single Sweet Child O' Mine, relayed over and over by MTV, became a worldwide hit. From then on, the band made a promise to themselves: from then on, they would only play in crowded stadiums.

Internal tensions are growing. Little by little, drugs and alcohol take over. Despite the setbacks, Axl Rose's paranoid outbursts and Slash's excesses, Guns n'Roses achieves a new miracle by releasing the mythical double-album Use Your Illusion, including the timeless cover of Bob Dylan's Knocking On Heaven's Door. It was a huge success, and the tour that followed set dozens of stadiums around the world on fire !

Slash takes off. In a fax to MTV he says: "Axl's vision for Guns N' Roses is completely different from mine. I just want to play the guitar, write a good riff and go on stage, rather than just present a picture". We won't see them on stage together again for years, preferring to file through the media rather than trying to reconcile.

After years of waiting, the band finally makes a comeback with an album entitled Chinese Democracy, followed by several world tours. A suspense that will have lasted 15 years and a band amputated of some of its legends since only Axl Rose and Dizzy Reed were part of the original formation.

Slash and Axl Roses talk to each other again. Better: they like to spend time together. So they have only one idea in mind: to re-form the band to conquer the crowded studios and stadiums. The comeback takes place under the spotlight, and the fans are surprised: in the band, nobody seems to have aged, and the energy remains intense.

The magic took place on this very hot summer evening, in an almost full Stade de France. This magic made of feeling, rock, charisma, unstoppable melodies and mythical riffs. Guns n' Roses is at the top of its form. It's a great personal emotion and a great pride to have been able to experience this with my friends.

Geoffrey, after the concert in Paris

Guns N'Roses is a huge band that embodies, in its own way, a rock'n roll way of seeing the world. They have made our hearts vibrate with exceptional hits. Today, to see the Californian band back on stage again, with Slash and Axl Rose reconciled, is pure happiness. The energy is as intense as ever. You only have to see the crowded stadiums to understand who you're dealing with !

The initial line-up of this Californian hardcore band, three quinquas, was on a sold-out tour. The result: a good-natured crowd flocked to listen to the veterans who always dressed tight, their hair always too long, with songs that were increasingly introduced into the pantheon of mass culture.

It must be said that Guns N' Roses obeys an unstoppable rock formula, from the inescapable riffs of its music to the packaging of its two strong heads. On one side, the singer Axl Rose, long hair and stringy, bandana, ephebe mouth. On the other, Slash, curly and thick guitarist, with his eternal top hat screwed on his skull.